One of the few sections of society who saw vibrations as a good thing were The Beach Boys. For classic motorcycle enthusiasts anything approaching pulsation, shuddering, shaking and the like is normally an overtly negative process. At best it might be a blurred mirror just when you want to know what’s going on behind you and at worse it might be something vital falling off because vibration has caused a fixing to unscrew. Anyone who has suffered the quixotic appeal of a Big British Twin will know the sensations of numb fingers, fractured brackets and regularly failing bulbs. Such motorcycles with 360-degree cranks are effectively two smaller singles bolted together. And before I get accused of Brit Bashing, the same thing happens to a lesser degree on Yamaha 650s. Place an XS-2 on its stand and blip the throttle hard; it leaps backwards several inches as the vibes work their way out of the chassis. When Benelli launched the Sei, much capital was made about its lack of vibration with images of a 50p piece sitting on its edge balanced on the filler cap of a running bike. The down side was that a lack of torsional stiffness in the essentially vibration free crank led to breakages between rods 3 & 4. Apparently even vibration free motors have their issues. A two-stroke triple should be inherently free of intrusive vibes but watch a Suzuki Kettle’s mirrors at tick over jump about.

Smaller engines have less reciprocating mass, so the force or amplitude of the vibration may well be less. However, this doesn’t mean the forces are any less potentially destructive. Our opening shot shows a case screw on a small stroker twin that regularly unscrews itself if the bike is ridden long and hard. The wrong revs at the wrong speed allied to just one slightly loose mounting bolt can repeatedly loosen fittings or fracture metal. Where manufacturers believe an engine needs its vibes tamed they’ll often rubber mount the engine or add balancer shafts. Neither is fit-and-forget; replacement and/or service are mandatory. The primary issue here is that when lateral motion is transferred into rotary motion the piston(s) and associated laterally moving masses must be stopped and started; this is a primary root cause of the various pulses distributed across your bike. On the assumption that vibration can never be truly eradicated from a reciprocating piston engine, all we can do is be aware of its causes and effects taking action wherever possible. Making a working assumption that balancers are adjusted and engine mounts properly tightened we can look at some of the less obvious but easily addressed options for vibration suppression. 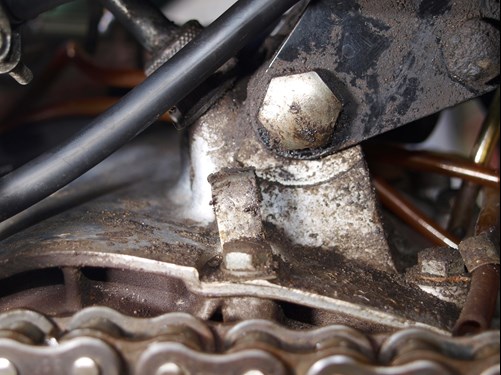 The sheathed electrical cable at the top right should be held under the clip centre but vibration persistently liberates it. A discrete zip tie on one of the frame tubes will disrupt the harmonics going on here and allow the clip to do its job. 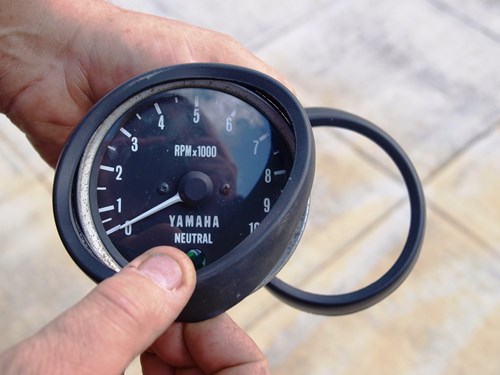 Delicate instruments require isolating from harmful vibes. Replacing a £5 clock rubber is the quick cheap and easy fix. Repairing the old clock or finding a replacement is the expensive solution. 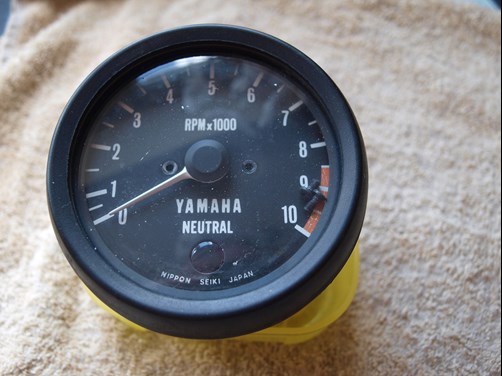 Ignore a hardened damping rubber and pick up the pain. Two screws (value 2p) are now on the loose ready to damage the clock face and potentially wreck the tacho. Prevention is better than cure! 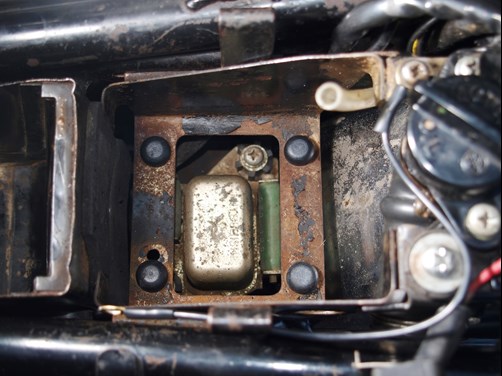 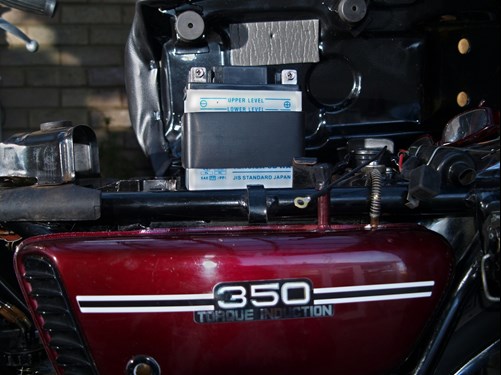 Batteries don’t take kindly to vibration. Most bikes run damper rubbers at the base of the battery box and often around the battery itself for a very good reason. A few lumps of strategically mounted rubbers can save a lot of hassle. 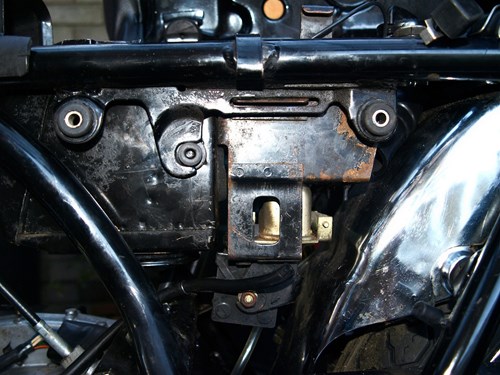 Rectifiers and regulators don’t take kindly to being shaken. Both hang off the battery box which is mounted on three anti-vibration rubber per side. These little guys will ensure AC goes to DC and voltages get maintained accurately. 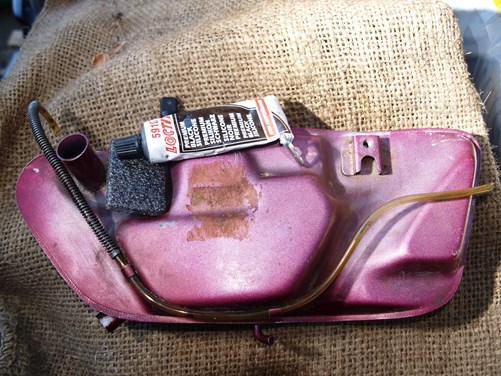 Larger metal surfaces can vibrate sympathetically at certain frequencies. Here an oil tank has lost its damping pad but a slice of modern closed cell foam from some computer packing and a spot of silicone adhesive will stop the harmonics from doing any real damage. 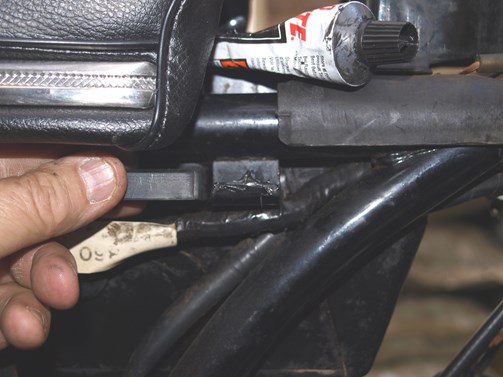 Side panels often hang off rubber damping pads but even these can wear over time. Mounting them with adhesive ensures everything stays where it should be. 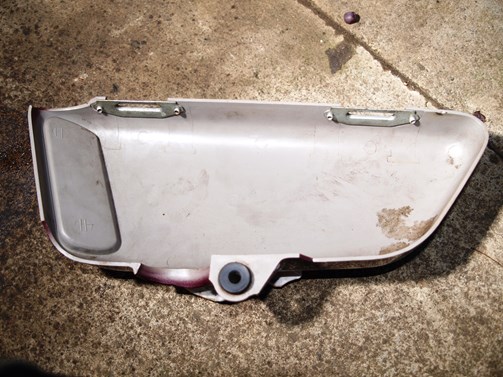 The panel’s mounting bracket’s pop rivets have loosened due to vibration. Intervention with a drift and hammer tightens them up and a new bottom damping rubber ensures any buzzing twixt panel and frame will be minimised. 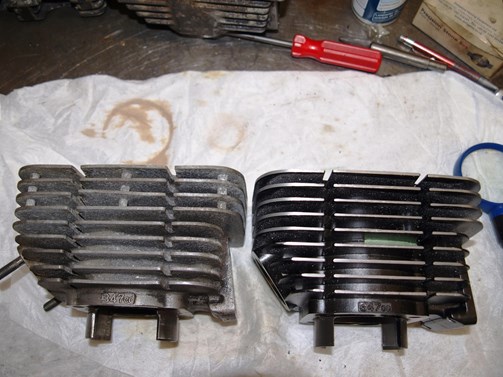 A standard Yamaha barrel (L) vs a pattern one (R). The factory one has sets of cast-in alloy dampers which prevent the trio of longer top fins from resonating. 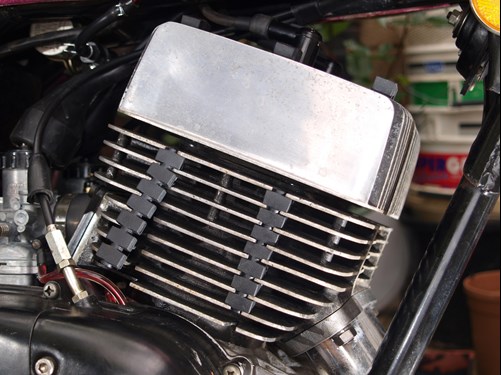 The fins aren’t continuous in a move to reduce sympathetic vibration but this only works up to a point. Yamaha had to fit damper rubbers between head and cylinder fins in a move to damp out profound fin ringing causing noise issues AND vibrations being transmitted through the chassis.

No engine is entirely free of vibration but the Japanese factories did their utmost to minimise its impact. Foot rests, lights, seat bases, mudguards, instruments and numerous other fitments were regularly and automatically fitted with damper rubbers. No one, especially the manufacturers expected the bikes of the 60s and 70s to be running today yet they are and in the main remarkably well. As ages catches up on the old warhorses it’s inevitable that things will wear out and it’s often the rubber vibration dampers that decay first. So perhaps the next time you’re digging around in boxes at an autojumble or surfing on eBay for rare parts spare a few quid for those hard to find rubber parts that make all the difference between a decent classic and a buzzing, vibrating rattle trap.

If you thought it was just brackets and bulbs that suffered from vibration think again. It’s quite possible to induce metal fatigue in key components if vibration isn’t adequately managed. Many a Triumph T120 suffered cracked front mudguard stays because the Meriden boys only had half the answer. The stays were rubber mounted to the fork lowers so should have been OK but when the bike sat at tick over the whole front fork assembly resonated back and forth by more than an inch fracturing the brackets. Yamaha’s equivalent XS650 twin contained more metal in key places so that this didn’t happen. Bar end weights are a prime example of managing vibration. It’s a given than handlebars will resonate at some point so adding a defined mass which shifts this point away from commonly encountered speeds neatly dodges the issue and avoids white finger syndrome.

Nuts, screws and bolts losing their grip is a well-documented phenomenon but one that’s easily prevented. Tightening them up to the correct torque is a sound move as is fitting vibration resistant washers or nut with plastic inserts. These techniques all have their place but nothing will work effectivity if either male or female thread has been stretched. In cases like these fitting a new bolt to a stretched hole is a best a temporary fix and even re-tapping the thread is unlikely to deliver a permanent fix. In situations like this a thread insert may be the only option but even then this may not be the perfect solution. If any fitting is loose it needs to be tightened immediately or there’s a real danger the thread may become irreparably worn. If prevention is truly better than cure a quick dab of thread locker on vibration prone fitting must surely be the best answer?

How To Keep Your Classic Bike Secure

How To Keep Your Classic Bike Secure

The Bristol Bus Company - From Boom to Bus

The Bristol Bus Company - From Boom to Bus

GTs: when four is better than two

GTs: when four is better than two