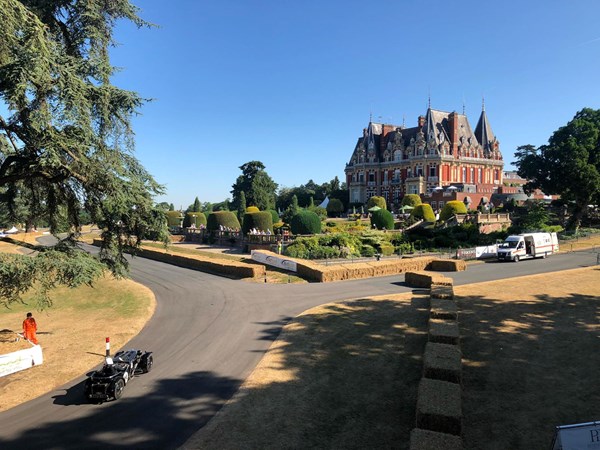 The summer event of the year, the Chateau Impney Hill Climb, took place this weekend over 7th-8th July.

Situated in the heart of the beautiful Worcestershire countryside, year on year the show attracts thousands of classic car enthusiasts, and this summer was no different.

The original sprints were organised by the Hagley and District Light Car Club, which soon became one of the most anticipated events in the motorsport calendar. The first event took place back in 1957, but sadly came to an end in the late 60s.

In 2012, the event bounced back. The course was double the length of the previous track (885m) with new twists and turns implemented to make this arguably one of the most challenging Hill Climbs known today. 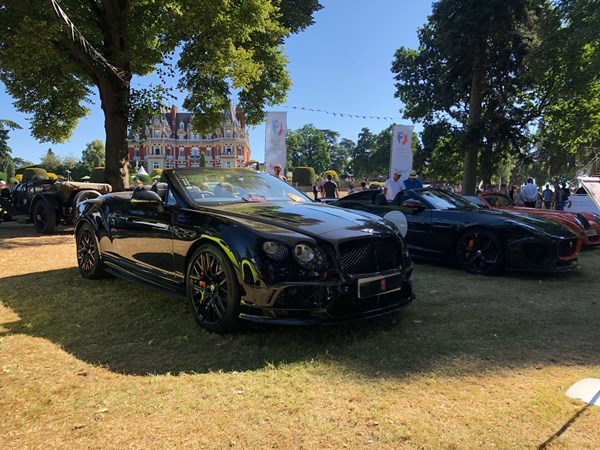 Footman James are proud to be partners of the Chateau Impney Hill Climb and each year we host the Footman James Concours d’Elegance competition.

Unlike usual concourses, the Footman James Concours d’Elegance asks you, the public, to have your say and crown the winner.

Overall there were 5 British marques in the line-up: Morgan, Jaguar, Lotus, Bentley and Aston Martin. Each marque then displayed two vehicles that would represent the brand.

For Morgan, they had a Morgan Family 4-seater and the all new Morgan Aero GT. 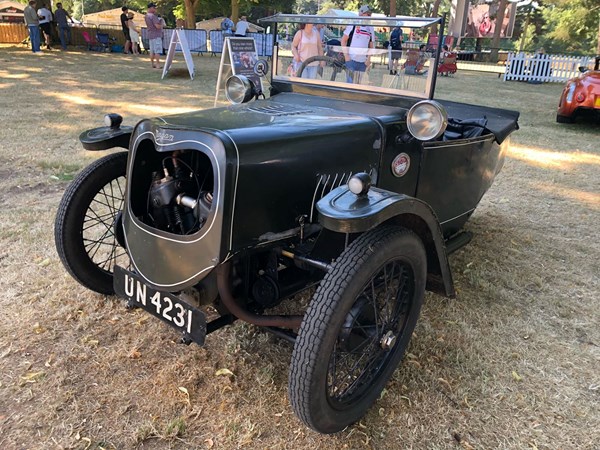 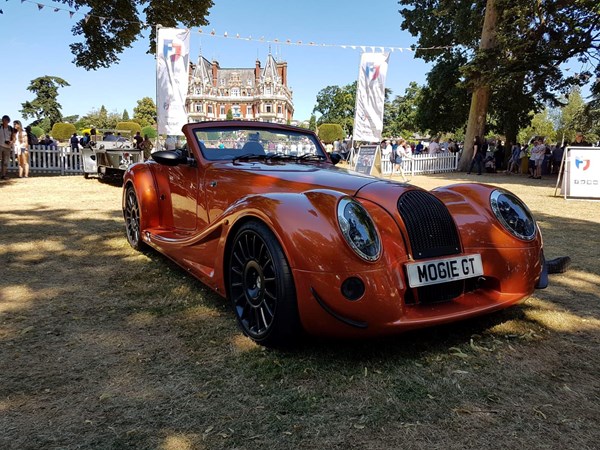 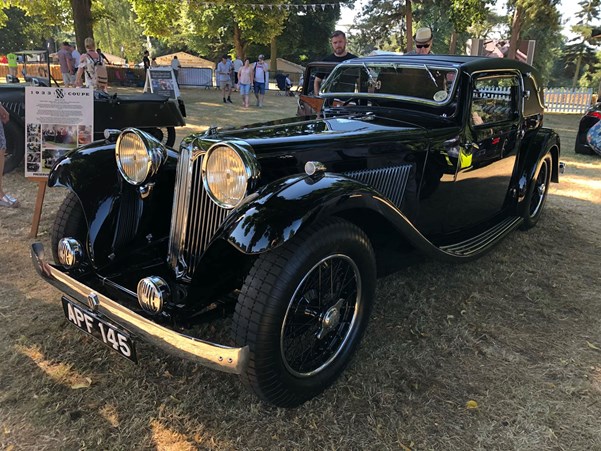 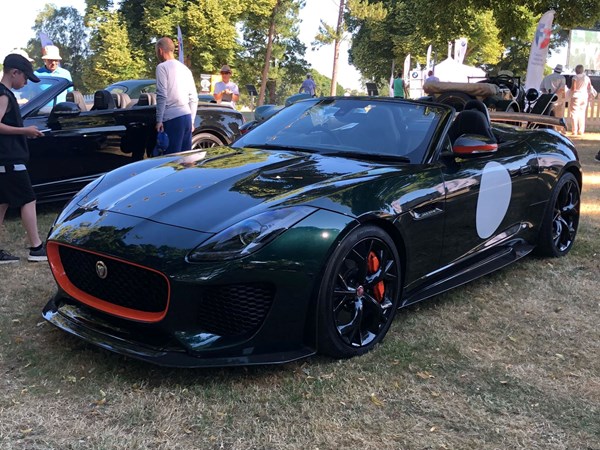 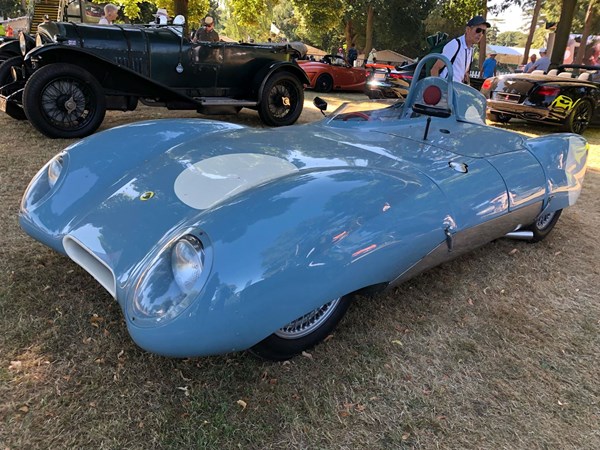 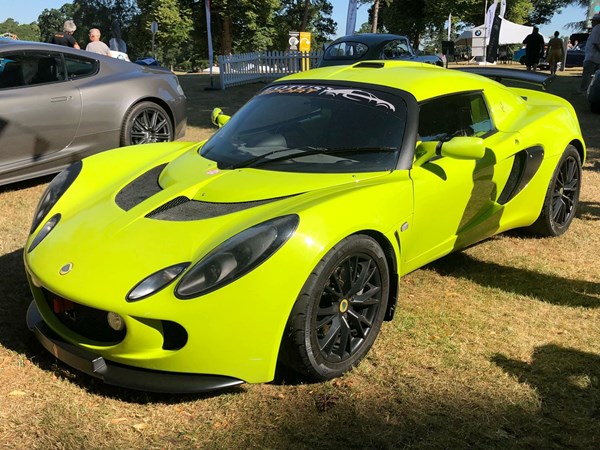 Bentley brought along their beast of a vehicle in the Bentley 3/ 4.5 and their sleek Bentley Continental GT 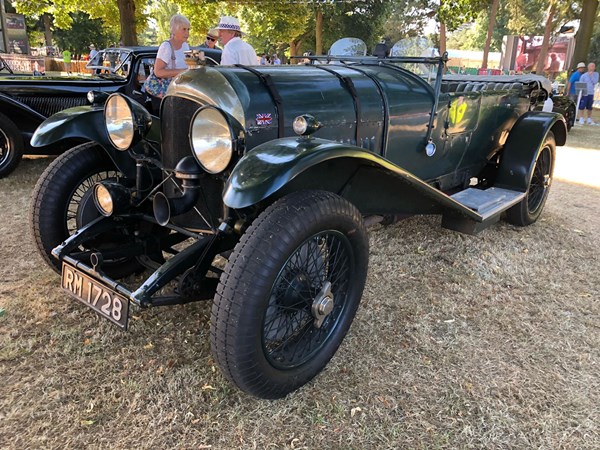 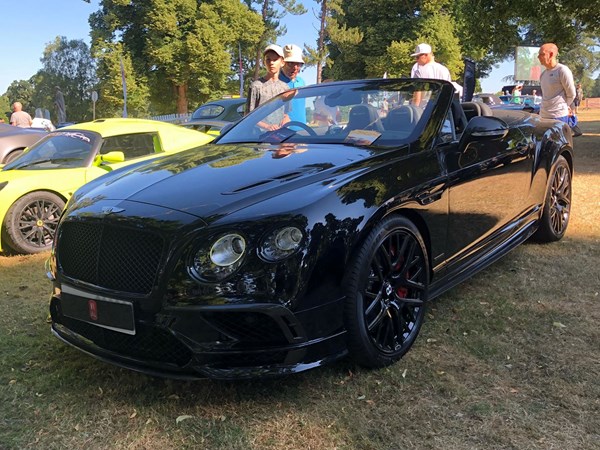 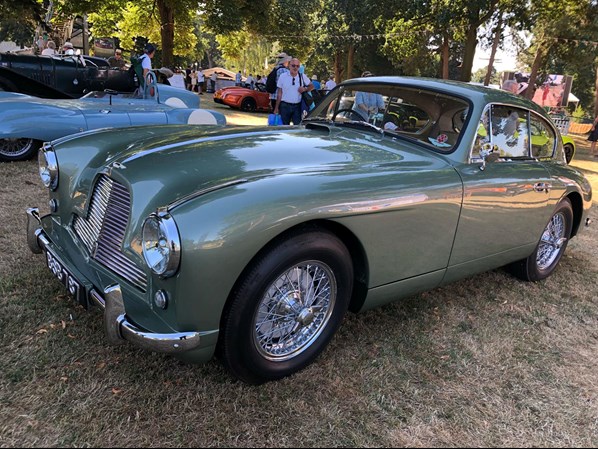 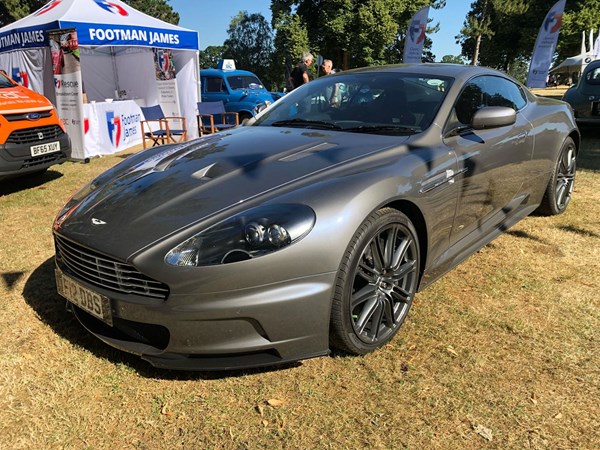 On Sunday 8th July, the votes were counted and we are proud to announce that the winner of ‘Best of British’ at the Footman James Concours d’Elegance was… Aston Martin! 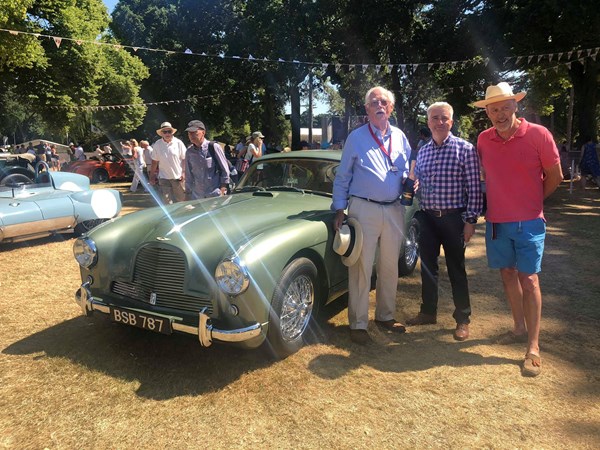 YouTube star of Harry’s Garage and founder of Evo magazine, Harry Metcalfe, was delighted to announce the winner and hand over the award.

Over on our Footman James stand, we were joined by our partners, RAC, who were on hand to help talk about their service and show how Footman James offer RAC breakdown through FJ Rescue.

Not only this, RAC displayed three vehicles over the weekend, both modern and classic! 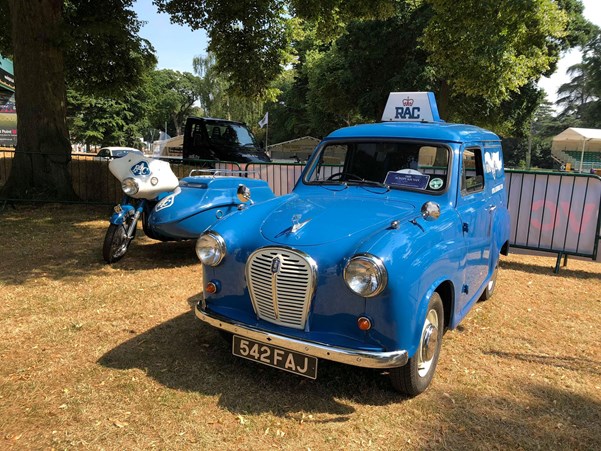 Two out of the three RAC vehicles were classics that were used by the RAC, dating back to as early as 1927.

The vehicles consisted of an Austin A35 van, which was one of the four-wheeled vans that replaced the RAC motorcycles previously used by their Patrol Services. From 1960-1967 Austin 35s were allocated to Supervising Officers

The next vehicle was a Norton ES2 sidecar which made its debut when it appeared at the Olympia Show back in 1927. Originally this classic bike was launched as a sports motorcycle when founded by James Landsdowne Norton in 1902. During this time, this Norton dominated the racing industry with its long stroke single engine.

As well as the classic car and classic bike on display, the RAC fitted perfectly in with the concours as they also displayed their modern patrol vehicle to show the difference between the makes as times has gone by. 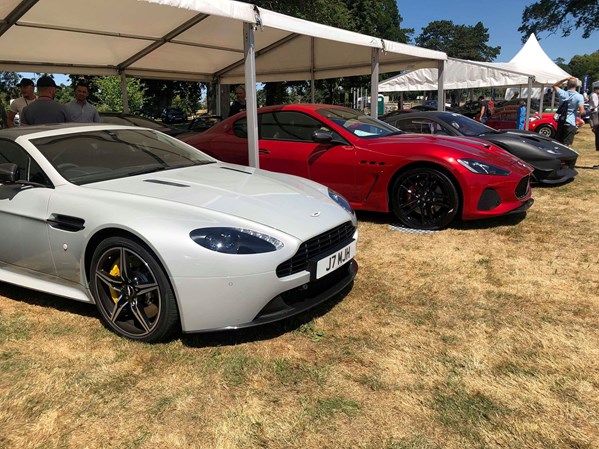 New to the Chateau Impney Hill Climb was the Supercar Expo, sponsored by Michelin.

The area featured over 100 supercars, including classic cars and modern-day vehicles. Enthusiasts got the chance to feast their eyes upon plenty of supercars, including the stunning Bugatti Veyron, Ferrari Dino, Lamborghini Huracan Performante and the rare Koenigsegg Agera R, which certainly gained a lot of attention over the weekend. 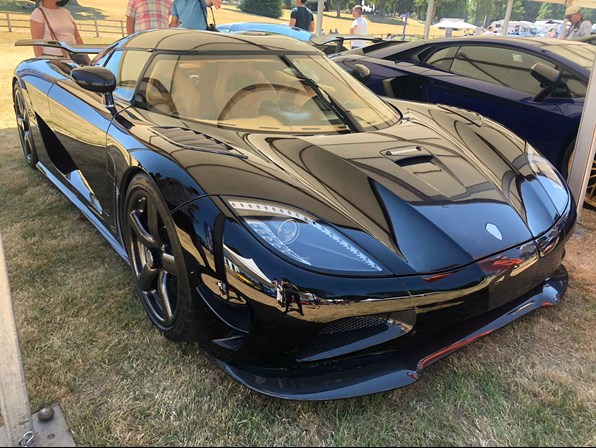 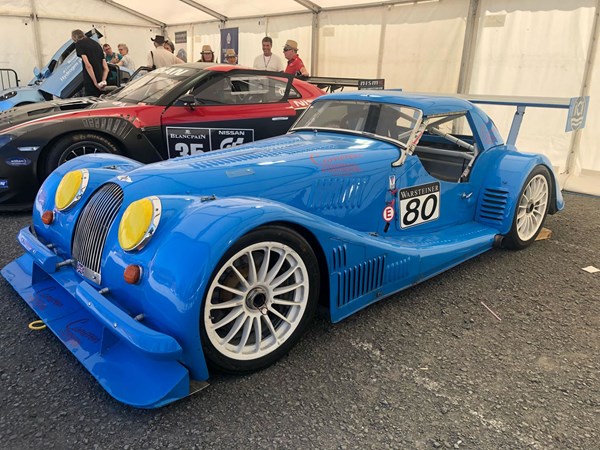 Over on the car park was a line-up of demonstration vehicles raring to go as various classic vehicles prepared for their demonstration runs across the lunchtime breaks. Some of these vehicles included; a Twin Cam Austin Racer, a Bloody Mary, the V16 BRM and ‘Big Blue’ Morgan Plus 8.

Courtesy of Footman James partners, the National Motor Museum, the 1.5 litre supercharged V16 BRM made its appearance at the show. The BRM was built by British racing motors for F1 competitions straight after World War Two, producing an astonishing 600BHP at 12,000 RPM.

Brookland’s Museum also brought along a selection of classic bikes to display, from an Isle of Man TT F2 side car to the Brough Superior S100. 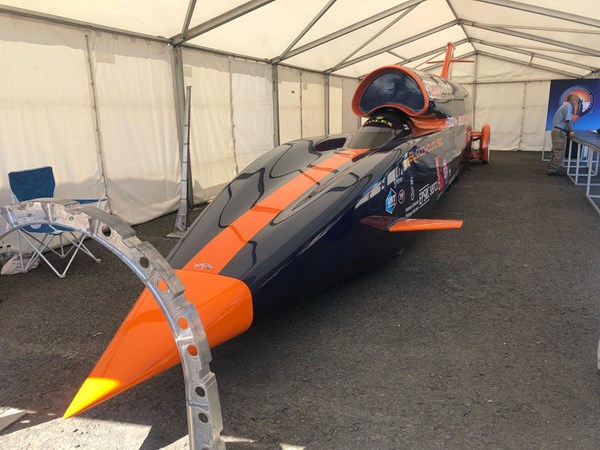 Near the demonstration area sat the humungous Bloodhound. The Bloodhound team are hoping to use the vehicle to break the land speed record of 1000mph – if they manage this, they will be travelling faster than the speed of sound.

Not only this, the Chateau Impney Hill Climb also attempted to break the record for the fastest time to complete five figures of eight between a parked Abarth Spider and an Abarth 595.

Don’t worry if you missed this either! Head over to the Footman James Facebook page and see Alistair Moffatt smash this record in just 56 seconds, 44 seconds quicker than the previous record attempt! 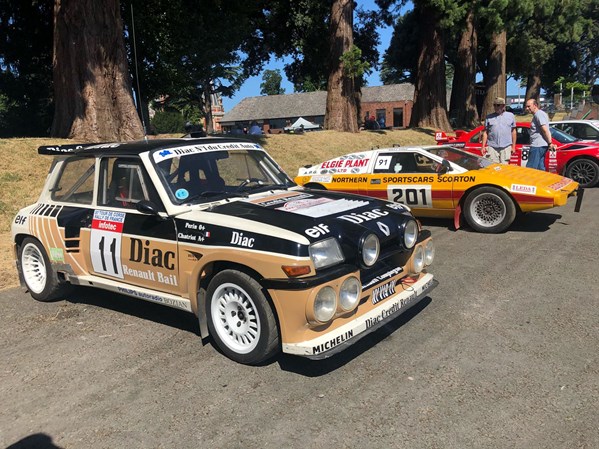 Due to popular demand, the Ralli 22 cars were back. The Chateau Impney Hill Climb hosted the second of three stages of the competition, as rally cars competed against the clock for the fastest overall time. 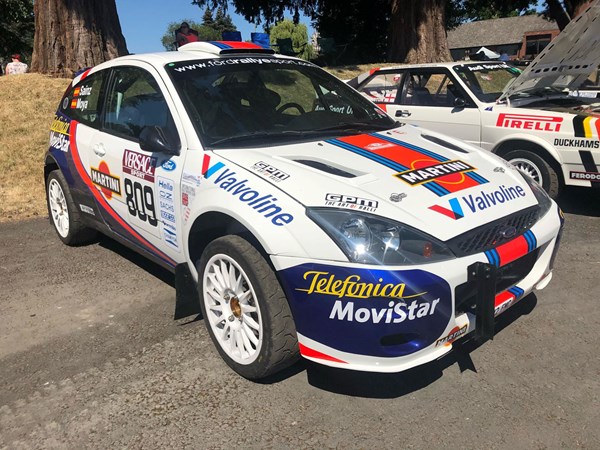 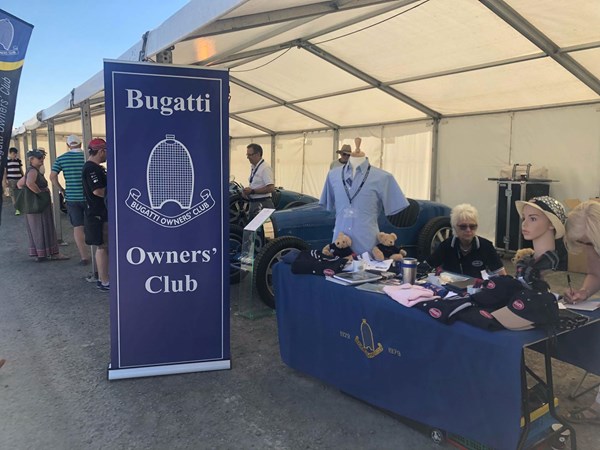 We would be nowhere without our much-loved classic car clubs and the Chateau Impney Hill Climb was proud to be associated with some of the most progressive classic car clubs in the UK including; Vintage Sports-Car Club, Morgan Sports Car Club and the Bugatti Owners Club, just to name a few.

It was great to see so many clubs support the event, with the Bugatti Owners Club presenting a unique display of Grand Prix Bugattis. 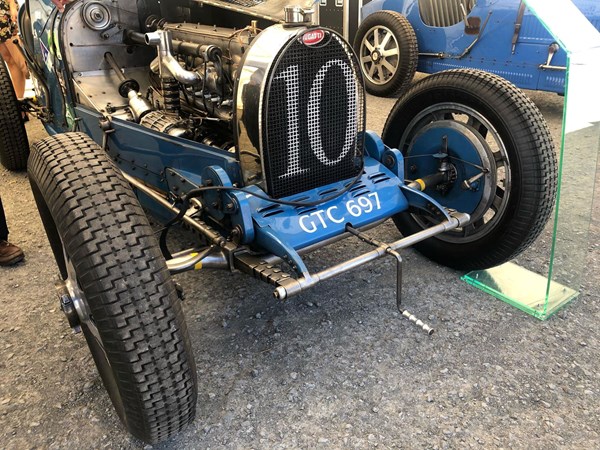 Bugatti’s success in Grand Prix racing began in 1924 with the Type 35 for the Grand Prix de l’ACF at Lyon that year. The Type 35 formed the basis of Bugatti’s GP cars for almost ten years and were perhaps the most beautiful GP cars ever built.

The most striking feature of the Lyon cars, never been seen before on a racing car, was the eight spoke cast aluminium wheels, which became Bugatti’s ‘trademark’ until it was replaced by wire spokes that were used on the Type 59.

In the end, Bugatti were arguably the most successful marque ever in Grand Prix racing which is reflected in the popularity of the classic cars amongst classic car collections today.

If you haven’t had your fix of Bugattis, don’t forget on Saturday 14th July 2018, it is Prescott’s 80th Anniversary and Bugatti Festival which will be celebrating 80 years since the first ever event was held at Prescott (home of the Bugatti Owners Club) in May 1938. 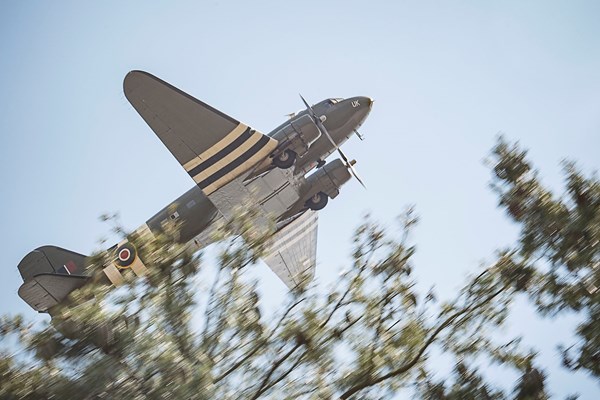 As well as the high-speed action taking place on land, enthusiasts looked to the sky as a Douglas C-47 ‘Dakota’ flew by on Saturday 7th July. This military aircraft was an adaptation of a civilian plane, and was most commonly used by the Allies during WWII. In fact, it played a significant role in the 1944 D-Day landings.

On Sunday 8th July, it was the turn of the Spitfire, which roared through the air doing laps of the Chateau’s estate. The Spitfire was the backbone of the RAF and is now one of the most recognisable aircrafts across the world due to its reliability and success throughout the war. 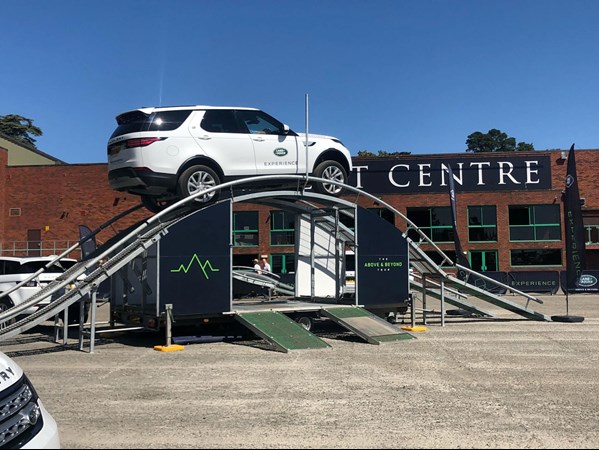 Returning this year was the Land Rover Experience that allowed you to hop in to experience a unique adventure that pushes Land Rovers to their limit. The course that Land Rover specialists take you on has been used for decades as a secret test facility which truly assesses the vehicles capabilities. 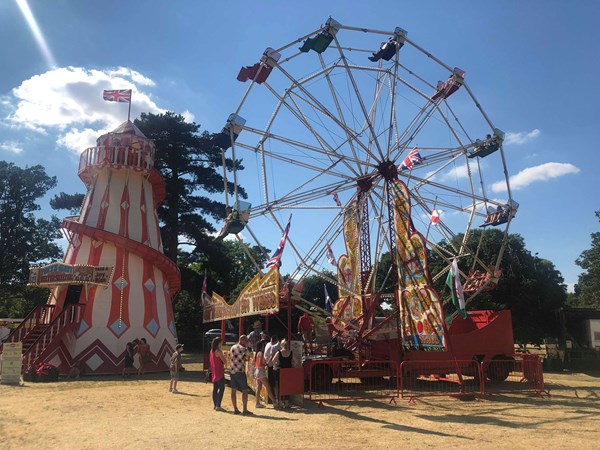 Near to the Supercar Expo, by the riverbank, was the family vintage funfair, which allowed little enthusiasts…and large, to enjoy some of the activities for free! Over the weekend you could get a great view of the grounds by hopping on and off the oldest travelling Ferris wheel in the UK – at nearly a century old!

You could also reach for the stars with the helter-skelter, satisfying your need for speed as you zoomed round the ride, top to bottom.

Brand new this year was funfair favourite, the dodgems. Children flocked to the ride as they whizzed round the track. They may not have been driving a Bugatti Chiron, but their imagination soared as they got their fix of what it’s like to get behind the wheel.

As well as the vintage funfair, the local Army Regiment were at hand once again with their popular rock-climbing wall and display unit. For just £5 you could experience what it was like to ride in a full-blown tank!

The Honesberie Shooting School were also looking for the finest sharp-shooter, with prizes for the person with the best shot of the day. Did you have a crack at it?

Now that 2018 Chateau Impney Hill Climb has passed, we set our sights on next year! We already can’t wait to see what 2019 will bring and are looking forward to announcing the winner from the weekend who has won two VIP tickets to Chateau Impney 2019.

So, if you voted at the Footman James Concours d’Elegance, keep an eye out on your emails as you may be our lucky winner.