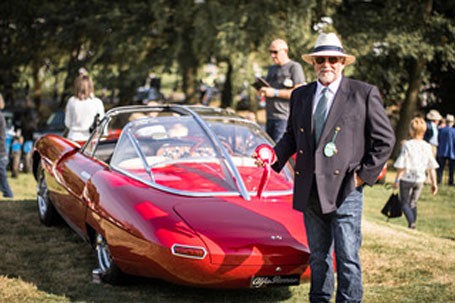 More than 10,000 people turned out to see a 1960 Alfa Romeo 3000CM Superflow IV former racer steal the show at the Warren Classic and Supercar Show.

The one-of-a-kind concept car – designed by Carrozzeria Pininfarina – has been crowned Best in Show at the prestigious event on the Warren Estate in Maldon, Essex.

Judges awarded extra points for it taking part in the Warren tour, but these turned out to be merely vanity points, with the motor receiving an overwhelming reception from the judges.

Outside of the competition, the public car park was bursting at the seams with rare classics and retro engines, ranging from a Metro 6R4 to a pre-war Hupmobile coupé.

Top of the podium
As the sun beamed down on Sunday, September 24, judges had a difficult job selecting the front runners, but there was only one clear winner and Steve Tillack, owner of the unique red vintage, took home the top rosette.

The Warren accolade is not the first award the futuristic vehicle has received, picking up Best of Show at Salon Privé during its British debut.

The motor also stole the show at the 1960 Geneva Salon.

First across the finishing line in the racing category was a 1953 Triumph TR2 Jabbeke record car.

A super soave DB2/4 topped the Aston Martin category, while the Ferrari class has been conquered by a 1959 Ferrari 250 PF Coupe.
Offering a stark contrast to the rare expensive classics and supercars, a Morris Minor 100 was awarded top of its class in the British Classics Category.