Ever wondered what happens to unwanted spare parts when they reach the scrapheap? You may think they simply get melted down, but one man with an artistic vision thought otherwise!

The parts were saved from the melting pot and found their way to James Corbett's workshop in Queensland, Australia.

The art world is always looking to push back barriers, and experts believe Mr. Corbett’s skill is unique.

So what most of us see as a discarded car radiator or oil cap, Corbett will see as a limb or component for one of his artworks. 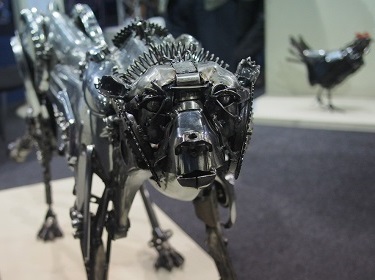 Cheetahs, geese, weasels ... all kinds of wildlife are given the Corbett salvaged car parts treatment, and the effect is simply stunning.

How did the James Corbett story start?
Corbett, 53, owned his own scrapyard when he started thinking in 1998: “Could I put these spare parts to better use?”

He crafted his first sculpture and put it on his shop counter’s display. Within months he began taking bookings for further works.

His vast Brisbane workshop, where he has accrued 16 years’ worth of classic car parts, is the hub of his activity.

How does he work?
There’s not one piece in a Corbett animal that doesn’t originate from a motor vehicle.

He first observes the animal he is working on in the flesh to help capture the realism and essence that symbolises his work.

Then he intricately goes about welding spare parts into the right place to produce sculptures imbued with striking movement.

What do the experts say?
John Davies, whose Gloucestershire gallery was exhibiting Corbett’s latest masterpieces until Christmas Eve, called his work “amazing” and an instant success.

Mr Davies believes that probably no one else is doing the sort of work Corbett does, and certainly not to the same painstaking, wonderful standard, The Daily Mail reports.

Our top 10 James Corbett masterpieces (in order of value)
- £14,500 Cheetah: Arguably Corbett’s pièce de résistance, with this cog-filled creature’s claws a particular wonder
- £14,500 Wild Boar Sitting: Wow! You can almost imagine this magnificent beast breathing out cold air through flared nostrils, so lifelike is this abstract piece
- £6,950 Tiff: A proud dog stands to attention, seemingly abetted by the use of a hub cap
- £6,500 Goose: A cigarette lighter appears to form part of this weird and wonderful goose’s neck
- £6,500 Fifth Cow: Oil caps are to the fore with this creature whose components were certainly not allowed to rust in peace
- £6,250 Boxing Hare: Corbett stands this marvellous mammal on its hind legs
- £6,250 Warning Rooster: One of the artist’s most vibrant creations, red being the prevailing colour
- £5,750 Bertie: A small canine metallic marvel
- £4,950 Feeding Ibis: Corbett nailed this one… literally. Nails constitute much of this brilliant bird’s plumage
- £4,950 Bossy Hen: Coil springs help put the “ugh!” into this ugly creature’s fascination