Barn-find E-type to go under the hammer for £45K

A Jaguar E-type that has been in a barn for 40 years will be the star of an auction set to be held at the Imperial War Museum.

The 1964 Jaguar E-Type car will need a lot of care and attention to restore it to its former glory.

The car has been unused since the 1970s and is offered from a deceased estate.

Damian Jones, of H&H Classics said: “Considering the perennial popularity of the immortal E-Type Jaguar, it's extraordinary how many have been confined to barns over the years and are only now resurfacing to the delight of new would-be owners. 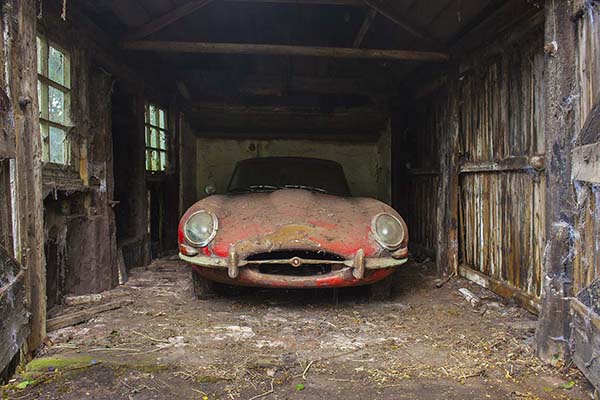 “So, if you missed the last one for some reason, take due heed of 'PRF 935B', a delightfully unmolested late 3.8-litre Coupe that’s just been exposed to the full light of day for the first time in 40 years and not even been started for 15.”

H&H Classics has put a pre-auction estimate of up to £45,000 for this the unloved Jag, but it will cost considerably more than that to restore it.

However, only 1,798 of the right-hand drive 3.8 Coupe are now in existence, making it a relatively rare find.

Finished in red with a grey interior, it was supplied new by Byatts of Fenton.

It had two owners before it was bought by the current owner’s husband in 1970 and was then stored in a barn on their property.

Also up for sale is one of Britain’s most iconic sports cars, the Austin-Healey 3000.

According to H&H, this very car was used in a full page advertisement in The Motor magazine in 1963.

A rare Iso Lele Sport is also up for grabs. It is one of 12 right-hand drive Sport models and features styling by Marcello Gandini and power from a Ford 5.7-litre V8 engine.

The auction will take place on October 12.