The Chateau Impney Hill Climb is one of our most anticipated events of the year, which is why we couldn’t wait to sponsor yet another Hill Climb which included our Footman James Concours d’Elegance, our trackside hospitality, in conjunction with Fisher Restoration and our Footman James Driver’s Club.

Over the years, the Chateau Impney Hill Climb has continued to grow with even more cars competing, more traders trading and more exhibitors exhibiting, it is a summer classic vehicle event not to be missed.

Over the past few years, we have had the pleasure of sponsoring the Concours d’Elegance at the Chateau Impney Hill Climb, which has seen some outstanding vehicles on display including, a Bugatti Chiron, Jaguar SS1 and Morgan Aero GT.

This year the Footman James Concours d’Elegance was bigger and better than ever, with the theme of ‘Through the Ages’ that saw four eras being represented by eight different marques. The marques and eras included:

Visitors on the day and online had the chance to vote for their favourite vehicle in the People’s Choice award for the chance to win two VIP tickets to the 2020 Chateau Impney Hill Climb. So, if you entered, keep an eye on your inbox as the winner will be announced shortly!

On the other hand, there was also a Judges Choice award, where TV/Radio presenter and frontman of The Car Years, Alex Riley, British racing legend and The Car Years presenter Vicki Butler-Henderson, YouTube star of Harry’s Garage, Harry Metcalfe, and Managing Director of Footman James, David Bond, took their positions and judged each car based on originality, presentation, provenance and style.

The votes were in and the winner not only won the People’s Choice Award but also took away the title of Judge’s Concours winner too. Congratulations to our very own Footman James client for her stunning example of a 1931 Alfa Romeo 6C, that took the hearts of both the judges and the people. 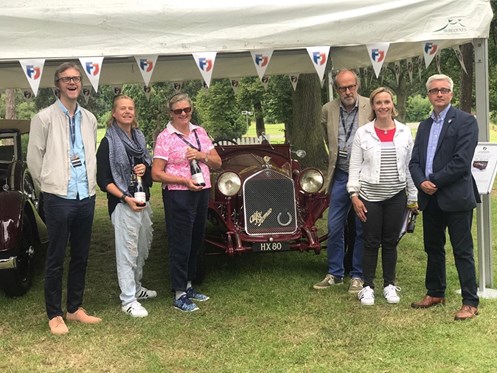 A special thank you also goes out to everyone that helped make our Footman James Concours d’Elegance the beautiful display that it was. We thank Fisher Restorations, Classic Motor Cars, Talbot Owners Club and our Private Client for kindly allowing us to display their vehicles at the show.

As part of a Footman James Private Client policy, you automatically join Footman James’ Chrome Collective, that can see you being invited to exclusive venues and hospitality, such as the Chateau Impney Hill Climb, Silverstone Classic and Concours of Elegance at Hampton Court Palace.

We loved speaking to our clients over the two days and it was great to see everyone indulge in the hospitality facilities which included catering, a bar and barista coffee. With a trackside view, comfortable seating arrangements and the sun in the sky, the hospitality area was a haven for motorsport action and classic conversation.

A land speed legend made its way to the Chateau Impney Hill Climb over the weekend in the form of a Higham Special, also known as BABS. 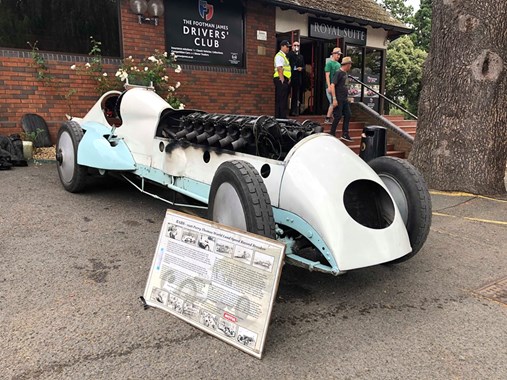 Once the fastest car in the world, BABS has a whole lot of history under her belt.

In 1924 John Parry-Thomas purchased a 27 litre Liberty aero-engine for £125 with the idea to rebuild the Higham Special with new bodywork to enhance the aerodynamics of the vehicle and have a crack at breaking the land speed record.

In 1926 Parry-Thomas was ready to achieve his goal and took BABS to Pendine Sands, Wales, to break the record. It was here that Parry-Thomas’ dreams became reality as BABS sped over 170mph to become the fastest car in the world.

The record was held for almost a year until Parry-Thomas heard that another clocked over 200mph in 1927. To much despair, Parry-Thomas decided that BABS would race again and take back her crown of Queen of Speed.

That March, BABS returned to Pendine Sands to claim victory of the record, but it was the tragedy that made the history books on that fateful day when J.G Parry lost his life. A catastrophic failure of systems, mechanics and some say, even driver, caused BABS to skid out of control into a mangled state wedged into the sands eight metres below.

42 years later BABS was resurrected by a technical college lecturer from North Wales, Owen Wyn Owen. Two and a half years later, BABS was restored to her former glory.

Now, BABS is located at the historic location in Pendine Sands at the Pendine Museum of Speed. However, BABS also made a special appearance at the Chateau Impney Hill Climb for those to learn and remember the triumphs and the tragedies of the once fastest car in the world.

YOU’RE ONLY SUPPOSED TO BLOW THE BLOODY DOORS OFF!

Famously brought to life by one of Sir Michael Caine’s most recognised films of all time, ‘The Italian Job’, the much-loved Mini was commemorated at this year’s Hill Climb by a wonderful display to mark its 60th anniversary. 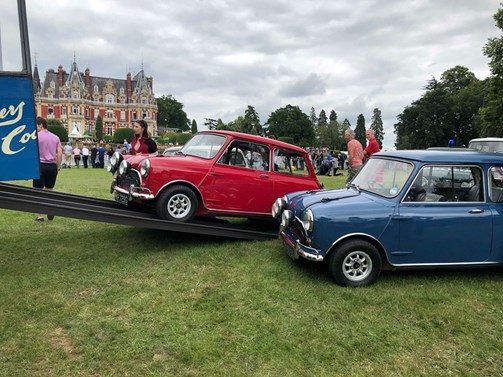 Despite ‘The Italian Job’ being a classic film on its own, it would not have been complete without the famous trio... the MK1 Austin Mini Coopers! Representing Britain, the Minis were finished in traditional British colours, red, white and blue, which became legendary in the world of cinematic cars.

Better yet, the celebrations didn’t stop there as the Chateau Impney Hill Climb represented the icon with their class, Class 18. This class saw 15 Mini’s take on the Hill Climb to be crowned ‘Mini King of the Hill’ in the last race of the day.

Guinness World Record Holder, Alastair Moffatt, returned this year to wow the audiences with his stunt tricks taking on not one, but two challenges throughout the weekend.

The first challenge Moffatt faced was a 360-degree drift into a parallel park between two vehicles and he sure didn’t disappoint as he managed a squeaky-clean finish perfectly. 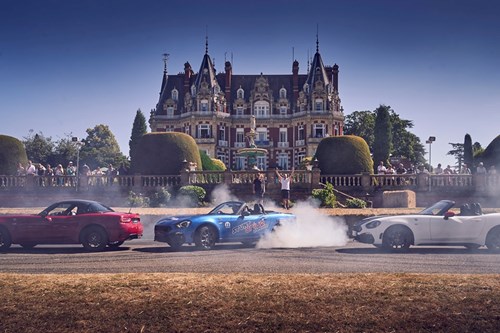 The second challenge was to mark the 60th anniversary of the Mini. Moffatt aimed to excite spectators by completing the Hill Climb course at the show… on two wheels! 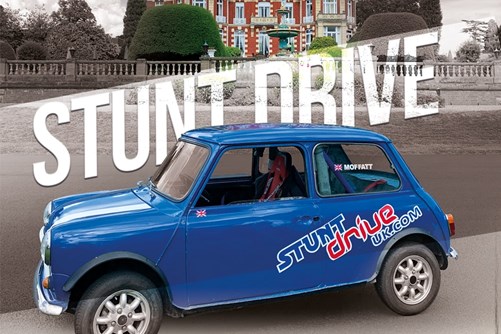 The Chateau Impney Hill Climb’s Supercar Expo invited an amazing 100 supercars to the show including a Koenigsegg Agera R, an Aston Martin Vulcan, a McLaren P1 GTR, a Jaguar C-X75 and a Bugatti Chiron. 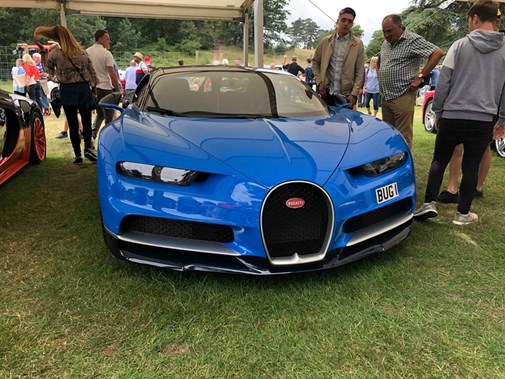 The Bugatti Chiron, which also featured in our 2017 Footman James Concours d’Elegance is the fastest and most powerful supercar that Bugatti has ever produced. Modelled on the Bugatti Vision Grand Turismo concept car, the Bugatti Chiron can reach speeds of 250mph in just 36.3 seconds.

Since 2017, Ralli 22 cars were brought along to compete at the Chateau Impney Hill Climb and have since become a firm favourite at the show. 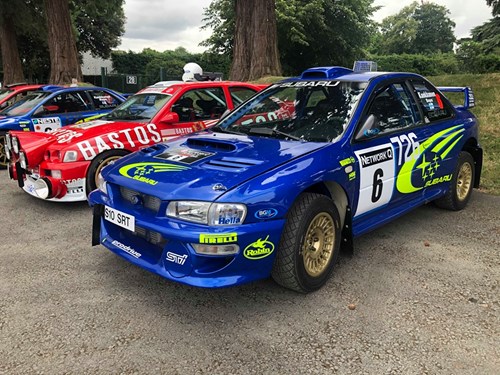 This year, the Hill Climb invited the Ralli 22 cars to compete in the second round of the 2019 Ralli 22 two-stage series. Included in the line-up are six ex-pro Subaru Imprezas, a Group B Lancia Delta Integrale, an Audi Quattro S1 E2 and a large selection of Fords including MK II Escorts and two superb RS 200s.

Mini may have taken the limelight this year for celebrations, but another British driving phenomenon also celebrates an even bigger milestone. On 10th July 2019, Bentley reached its centenary anniversary. 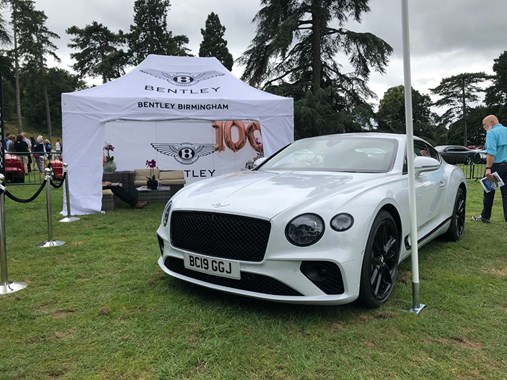 From the humble beginnings of the three-litre Bentley, right through to the modern-day era, there has been plenty to celebrate over the past 100 years. To mark this momentous occasion, the Chateau Impney Hill Climb invited Bentley owners, drivers and cars to the show, including Bentley Birmingham who displayed a wonderful example of a Bentley Continental GT Auto.

For many years the Land Rover Experience has provided an element to the show that everyone enjoys. Fans of Land Rover got the chance to hop in and test the capabilities of the fantastic Range Rover vehicles up close. 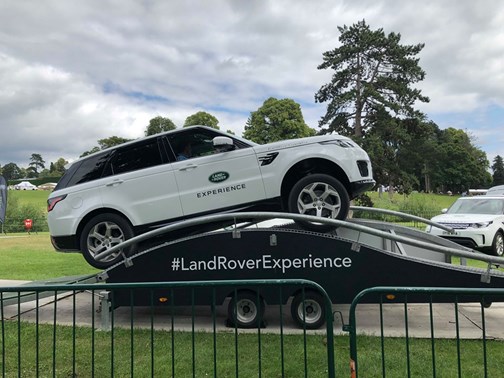 In the hands of a skilled instructor, visitors could take on the Land Rover Experience course and tackle the terrain with confidence.

Not only this, but little ones could also be part of all the action by jumping in behind the wheel of their very own Mini Land Rover. In the hands of Mum or Dad, little Land Rover enthusiasts had the chance to steer their way around the mini Land Rover course. Now that’s what you call inspiring the next generation of car fanatics.

The Chateau came to a halt when the famous Lancaster Bomber flew over the Worcestershire countryside. Courtesy of the RAF, visitors were amazed by the sheer roar of the aircraft. 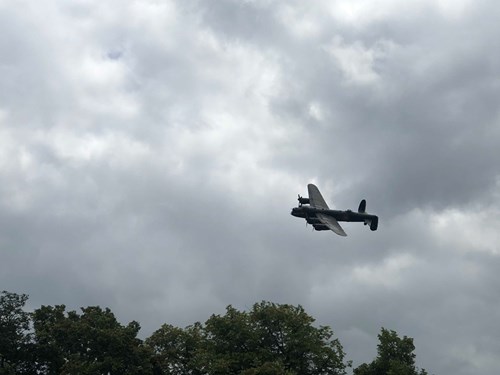 The PA474 is one of only two Lancaster Bombers remaining in an airworthy condition out of the 7,377 that were built, and it certainly didn’t disappoint when the 74-year-old goliath dazzled the crowds over the weekend.

Over on the riverbank was a selection of special displays from classic car clubs including Porsche Club GB, the Morgan Sports Car Club and the Mini Register, just to name a few. 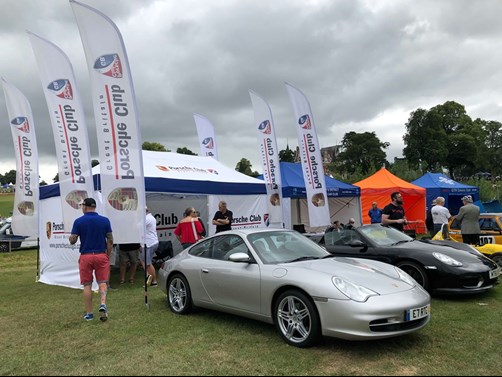 Did you know that our team at Footman James can offer your specialist club rates for club members?

ROLL UP, ROLL UP TO THE VINTAGE FUNFAIR!

The Chateau Impney Hill Climb is a great show to take the whole family. Whether you are a classic car fanatic, an adrenaline junky who loves supercars, or someone who just adores a family day out with loved ones, the Hill Climb had it all.

Visitors could take a trip down memory lane and explore the nostalgic vintage funfair, where they could soar high above the trees on the vintage Ferris Wheel, twizzle down the slope of the Helter Skelter, or whiz around the track on the dodgems. 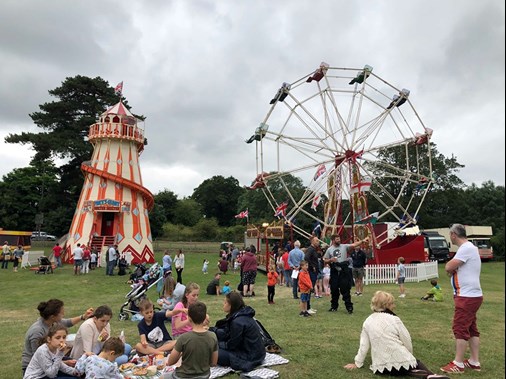 Many would think that the thrill and excitement would come at a cost, but not at the Chateau Impney Hill Climb as each of these activities were completely free with your entrance ticket.

Away from the vintage funfair were plenty of other activities for families to dive into. This included an eight-ton ‘Sports Tank’, model boats, the Honesberie Shooting School, the local Army regiment and even the beautiful 19th Century steam engine, also known as The Lady Armaghdale. 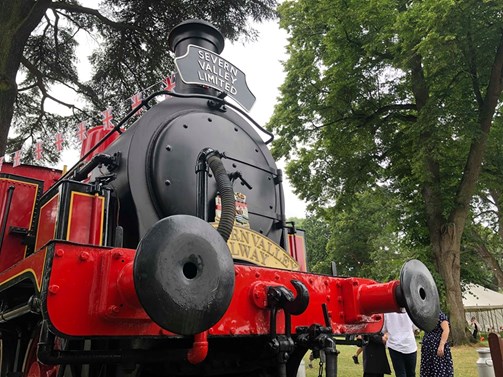 The Lady Armaghdale is no ordinary steam engine as she has appeared in several TV and film productions including her being starred as the most famous train of all time, Thomas the Tank Engine. Since then, this 35-tonne engine has been restored to her former glory and now situates at the Seven Valley Railway.

For adrenaline-fuelled visitors, the Demon Drome was the place to be as onlookers could witness the daredevil and death-defying performance every hour.

Thousands of visitors may have observed super and classic cars race around the track over the weekend, but for petrol-heads, the Demon Drome was the place to be as onlookers could witness the daredevil and death-defying performance that cheated gravity every hour. 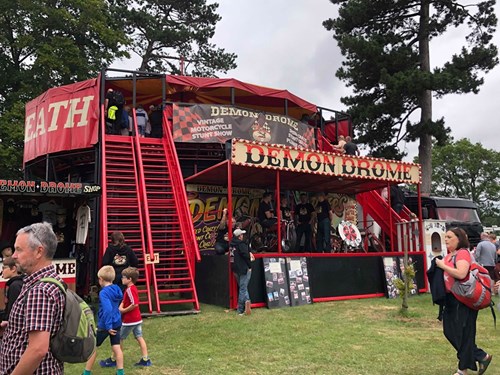 The Demon Drome is the oldest surviving wall of death which sees 1920 Indian Motorcycles tear up a 20-foot vertical wall parallel to the ground, whilst the riders put their lives in danger as they perform a variety of tricks on the vertical wooden raceway.

BRING ON NEXT YEAR

We now can’t wait to see what next year has in store, what Concours vehicles will be entered and how many more people we will be honoured to meet.