This month's classic motorcycle of the month is the iconic Moto Guzzi V8. With its easily distinguishable body and milestone engineering for the time, the motorcycle stands as a time capsule of the era and one of the finest bikes ever made.

The Moto Guzzi V8 was designed by Giulio Cesare Carcano specifically for the Moto Guzzi Grand Prix Racing team seasons between 1955 and 1957. Though Moto Guzzi were already popular at the time, following the success of the Bicilindrica v-twin, the Moto Guzzi V8 helped to cement their reputation.

The motorcycle was always intended for competitive racing and featured an impressive 78 horsepower which was unprecedented at the time. Not only this, but the bike even managed to reach speeds of 172 mph! To give an indication of just how notable this was, it would be a whole twenty years before this speed was reached again in Grand Prix motorcycle racing.

The motorcycle is exceptionally rare, with only a handful of people ever being able to ride the bike. The Moto Guzzi is a much sought after vehicle with a rich history, and is well deserving of motorcycle of the month.

History of the Moto Guzzi V8
Moto Guzzi had already created a reputation for pushing engineering boundaries in previous models; with its wide range of design customisations and layouts, the V8 helped to continue this trend.

The engine was conceived by a small team of people including: Giulio Carcano, Enrico Cantoni, Fergus Anderson, Umberto Todero and Ken Kavanagh, following the 1954 Grand Prix.

In order to promote the motorcycle, Fergus Anderson sent a letter to the international motorcycle press announcing their intentions to attend the following years Grand Prix season, and challenging them to guess the configuration of the Moto Guzzi V8. After a remarkably small turnaround, the bike was publically exhibited in 1955. 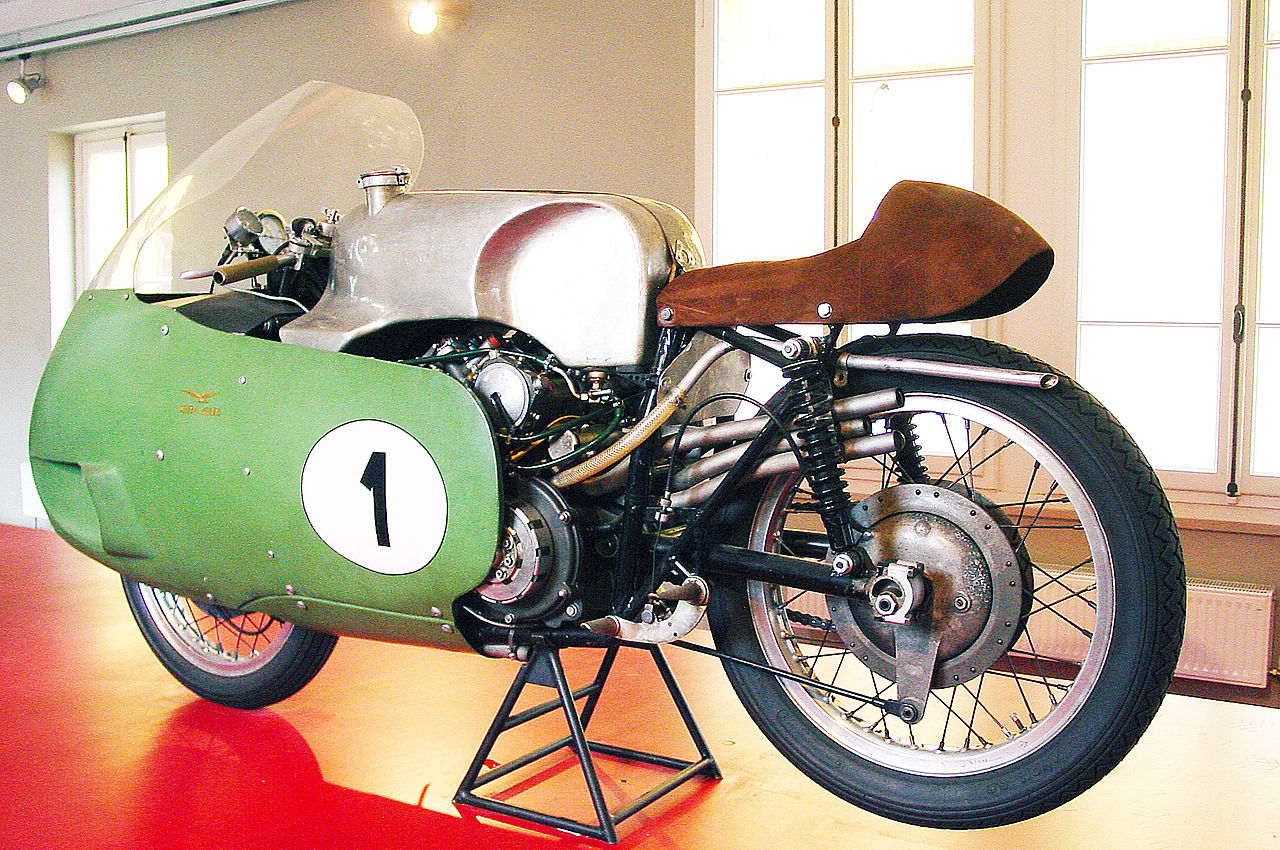 Competitively, though the Moto Guzzi was notably speedy, it was sometimes dangerous and though less than twenty people ever got to ride the bike, a high proportion suffered accidents on the bike. Perhaps most notably was Fergus Anderson who crashed the motorbike in its maiden run, Modena.

The ‘Otto Cilindri’ was expensive and was subject to common faults, overheating and seizing. Because of this, and the risk it presented to riders, the V8 was withdrawn from the Grand Prix in 1957. Since then models of the bike have become increasingly scarce, and are now one of the most popular motorcycles for collectors.

About the Moto Guzzi V8
The Moto Guzzi V8 was an impressive, water-cooled, 500 cc V8 motorcycle. It featured eight 20mm Dell’Orto carburettors, double overhead cams and eight unsilenced exhausts. The finished engine weighs just 330 pounds with the crankshaft, which enabled the bike to reach much higher speeds. This was remarkable for the time, and a number of the features were ahead of the curb.

This may have somewhat contributed to the bikes small timespan, however. The V8 engine required a delivery of 800 sparks a second, which had no way of being reliably delivered at the time. Additionally, restrictions in manufacturing technology meant that production of various elements was sporadic and underfunded.

Despite these restrictions, the motorbike stands as a remarkable feat of engineering and is often sought after at the world’s most prestigious motorcycle events.

What are your thoughts on the Moto Guzzi V8? Ever been fortunate enough to see one? Tweet us at @Footman_James to join our discussion on this iconic vehicle.