The Yamaha has always been a good starter and performs well, but there’s something I am just not comfortable with. From the off the most obvious issue is the cyclical sound the engine makes at tick over. It’s apparent that, although not noisy, there is a chugga-chugga-de-chuck-de-chuck-chugga-chugga sort of rhythm emanating from within the bowels of the beast. It doesn’t sound like anything overtly worn and there’s no obvious accompanying grinding or banging sounds but it’s all a bit too clattery for my liking.

Yamaha guru mechanic Andy Lee agrees with my initial suspicions that it’s probably the carburettors out of balance. This means that each of the pots won’t be fuelling in synchronisation with its neighbours, thus leading to the rough running and all manner of uneven forces being placed on the crank/transmission systems, not to mention compromised performance. I’ve balanced twins before by ear but this is a little more sophisticated. Looks like we’ll be scaling another learning curve then folks. 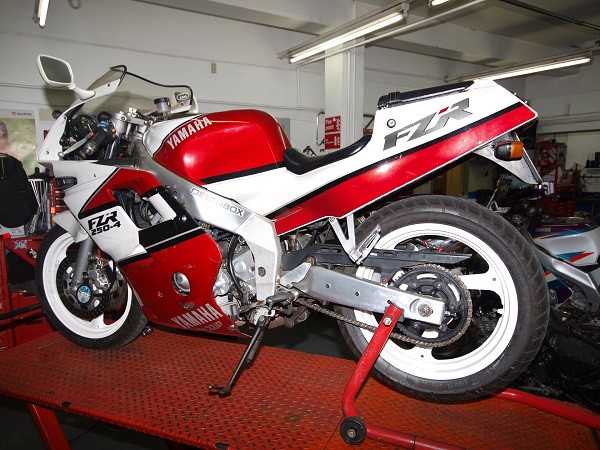 A suitable case for treatment; there’s a lot of vulnerable plastic here so a paddock stand is almost obligatory when working on a bike that has no centre stand. 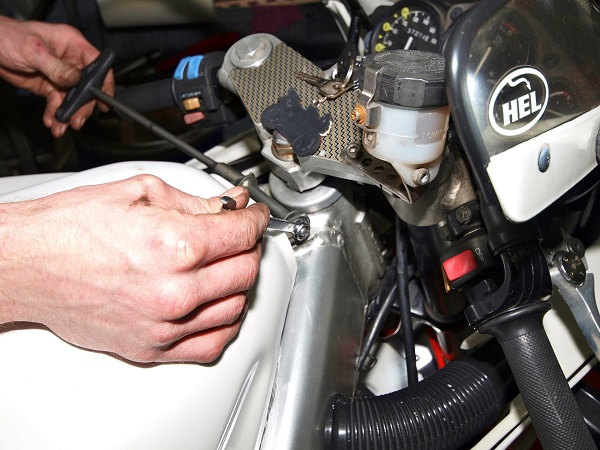 We need overt access to the carbs so the tank has to come off. Here we’re unbolting any fixings then lifting off from the rubber cushions below; a fairly standard set up. 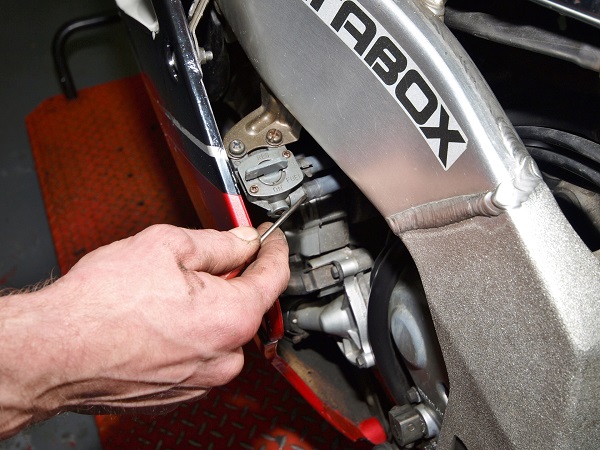 But before we do, we need to unhitch the pipe to the fuel pump. Careful examination with a torch shows Andy this is the one to be carefully prised off. Removal of the adjoining panel makes the job easier. 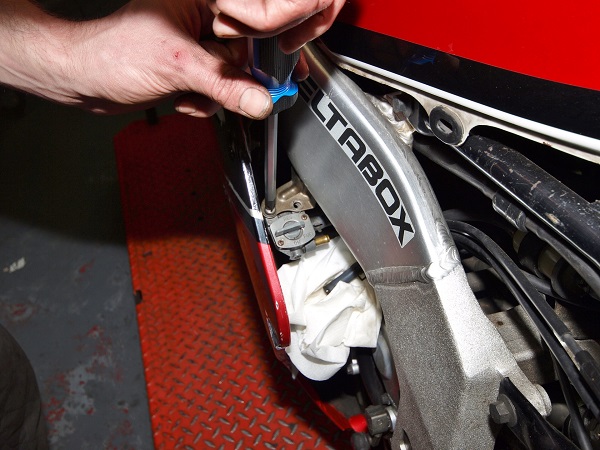 With the outlet pipe off and the residual fuel contained we can unscrew the tap from the chassis bracket leaving the ON & RES pipes still attached to the bike. 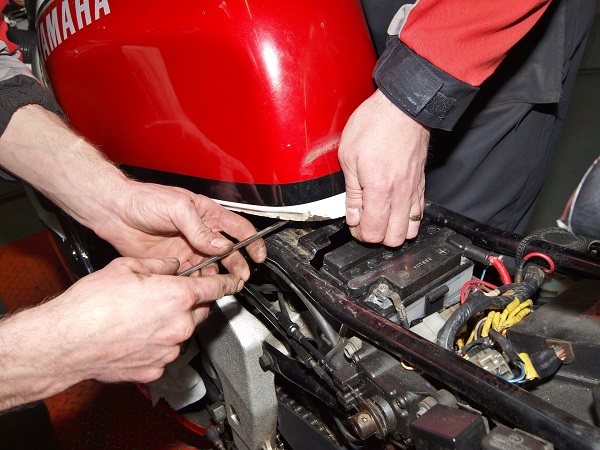 Some subtle leverage and controlled muscle sees the tank lifted off from the back end so that it can be removed out of harm’s way. 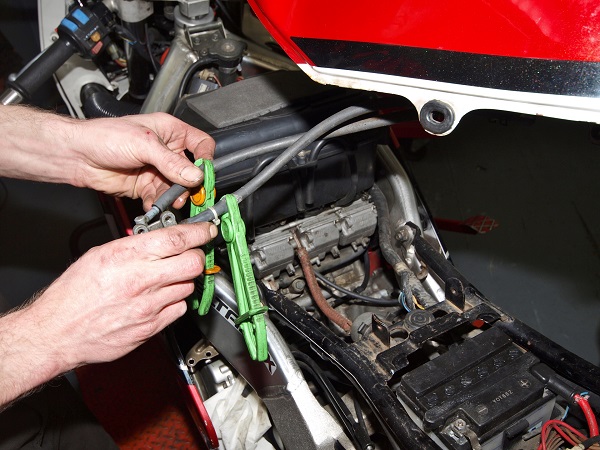 Ooops, someone has been in here before and managed to wrap the pipes around the loom, fuel pump and EXUP cables. These quick-clamps make short work of the mandatory replumbing exercise. 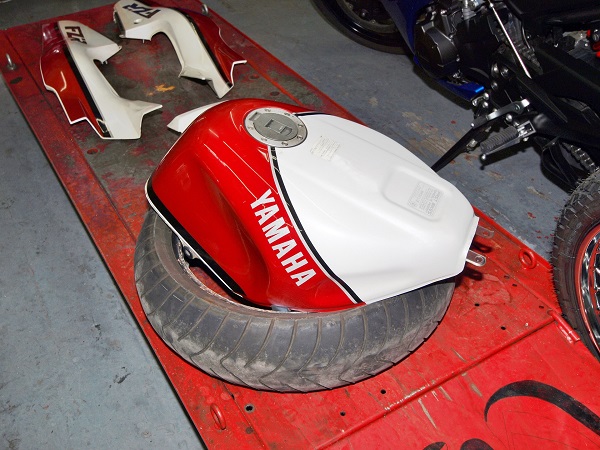 Always keep at least one old tyre to hand. Race replica tanks love falling over so this is an excellent way of preventing damage. 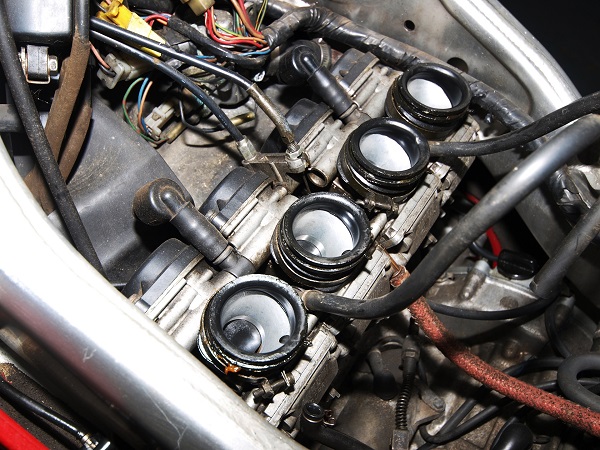 Whilst it might be viable to balance carbs with an air-box in place, we have our off so that we can get easy access. The carb-to-air-box rubbers have shrunk and are happily sitting on the carbs so I’ll need new ones. 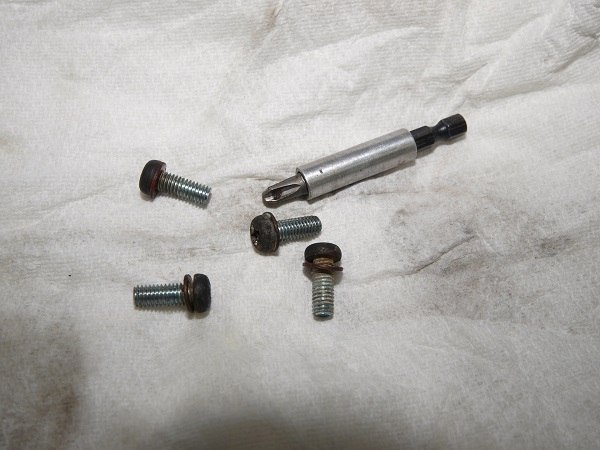 In the inlet tract, there will be blanking plugs of one type or another. Often there are blind rubber bungs held on with clips but on the baby EXUP it’s simple cross head screws sealed by fibre washers. 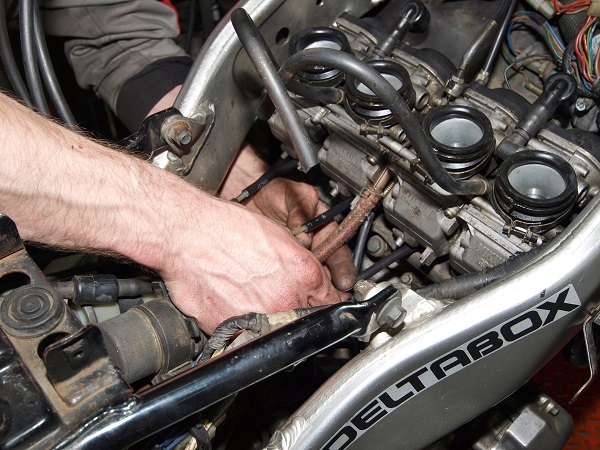 The take-offs to the unit are plugged into the inlet tracts with the appropriate adapters ready to be connected to the vacuum gauges. These measure vacuum or manifold depression and are incredibly sensitive bits of kit. 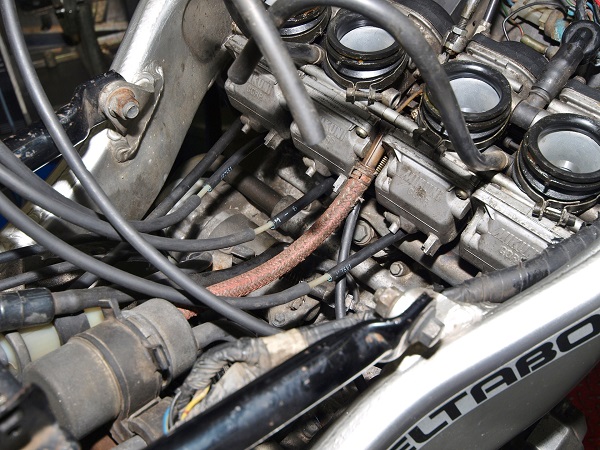 The pipes and adapters are connected to the gauges and the bike warmed up ready to take the initial readings using an external fuel supply. 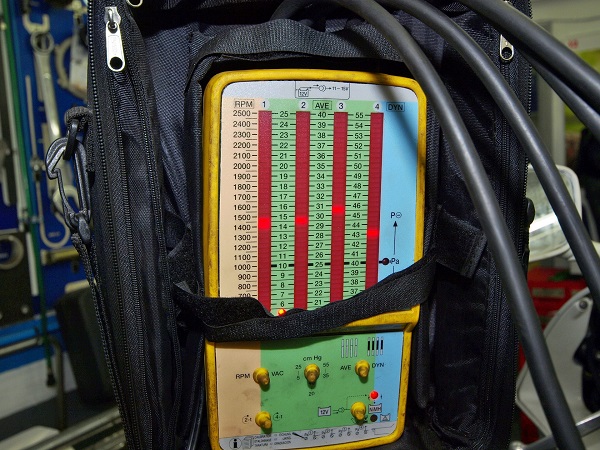 On this system, the reading is indicated by a series of LEDs on a scale. Here we can see pots 1 & 2 are about equal with 4 a little higher and 3 flowing more air/fuel mixture. 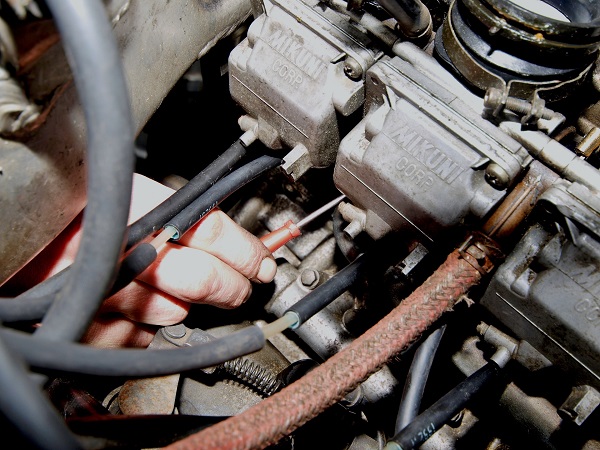 Between carbs 1&2 and 3&4 there’s an adjuster. Here we’re synchronising carbs 1&2; the other pair will get attended to in a moment 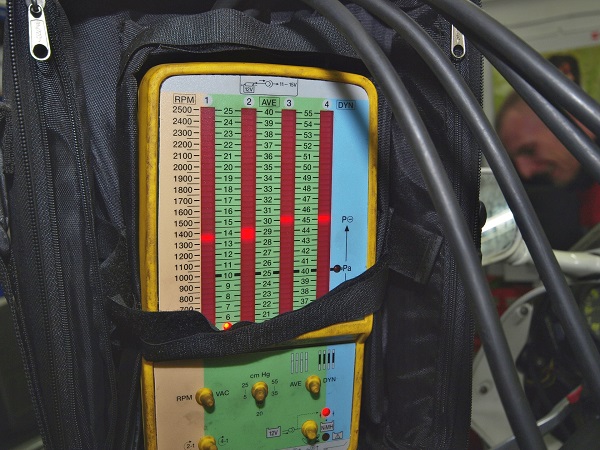 Now that’s more like it; each pair of carbs is now balanced. 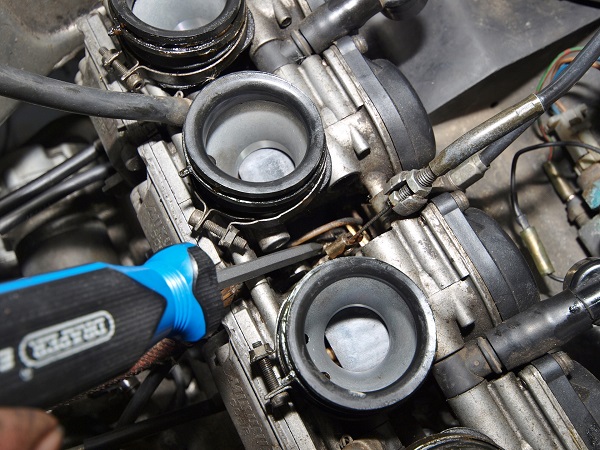 Perhaps not too surprisingly we now need to balance the two pairs of carbs to form one cohesive unit; of course, there’s another screw to balance them between carbs 3&4. 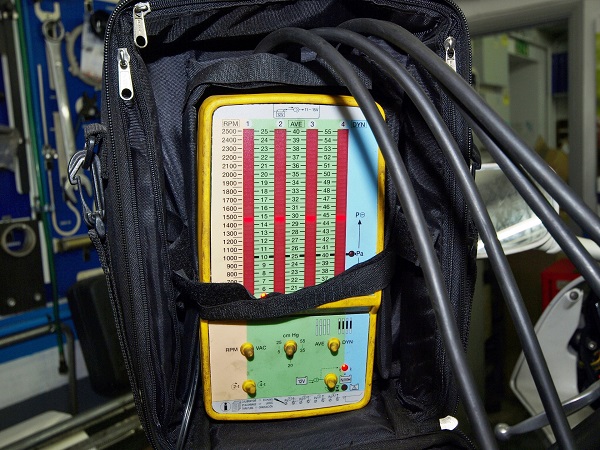 Job done! All four carbs are giving the same reading and the engine now purrs like a large and very contented cat; those odd cyclical noises have completely disappeared. All that’s left to do is put the air box and tank back on.

The vacuum gauges we’ve been using courtesy of Webbs are mega expensive electronic units that are the bee’s knees. Whilst they are top notch they aren’t the sort of kit you’d have at home and are also probably overkill. The two commonly used DIY vacuum gauges found in most fettlers sheds are either the column units or traditional dial types. Both have their pros and cons but to be honest either is more than adequate for our purposes. The choice is more personal preference than anything else so it’s worth asking around to see if you can see both types in use and then make an informed decision. If you’re lucky your instructor will allow you to borrow them anyway.

What do the numbers mean?

In absolute terms the number on a carb balancing gauge typically indicate millimetres or centimetres of Mercury or atmospheres of pressure; for our uses, this simply translates as vacuum or suction. One atmosphere of pressure equates to 760mm of Mercury (mmHg) but it’s all relative, to be honest.

The instructions that come with your chosen gauge will explain the finer detail, but the bottom line here is that the actual numbers are not as important as getting all the readings as close as possible. Once you become practised at using gauges you’ll begin to notice how the individual exhaust notes change if each pot has a separate silencer. With a 4-1 the differences are a little more subtle but still there.

Years ago the best engine tuners used to set bikes up by ear and this carb balancing malarkey was one of those apparent black arts. If one carb has a substantially different reading to the others there’s a list of likely suspects. It’s possible the adjuster in question is at the end of its thread so you need to back off all of them and start again which is a hardly a problem.

Air leaks on the carb or airbox rubbers will have you chasing your tail, or it could be something as stupid like you’ve trapped or bent one of the rubber pipes to the gauge…in which case you’d be in, er, shall we say auspicious company (no please don’t ask). If things look really iffy you might even be looking at a loss of compression on the cylinder in question and thus a loss in pumping efficiency. Ultimately if you’re serious about multi-cylinder machinery a set of vacuum gauges might just be the best accessory you'll ever buy.