Okay, so modern bikes may not have carburettors anymore but a lot of classic bikes still run with them. By the time psychedelia was being ousted by glam, the Japanese had well and truly got their heads around making precision carbs that fuelled pretty much seamlessly. Designed without any compromises and made from the correct metals, they worked better and wore less than many of Amal’s contemporary offerings. Amazingly they still work well today, which is a true testament to their design and construction. The prime causes of malfunction decades on are likely to be stale petrol and meddlesome owners. The former is sadly unavoidable and goes with the territory; the latter is best described as "the enthusiasm of youth". Where experience is outweighed by ambition it’s often the carbs that are the first things to suffer.

CV (or constant velocity) carbs have many reasons to be recommended. They give predictable/progressive, if not instantaneous, acceleration, tend to fuel very smoothly and don’t immediately bog the engine down when you whack the throttle open. They also tend to give better fuel consumption and, by default, lower emissions. This point was noted quite early on, when the Japanese were under increasing pressure from the various 1970s government agencies. Probably one of the first truly successful uses of the CV carb as we know it was on Yamaha’s 1970 XS1 (aka XS650) and by coincidence we just happen to have a pair on the bench at the moment. The following information is, in general, applicable to all carbs and is intended to add further detail and information to some of the features on carbs we’ve carried previously. The tips and heads-ups that follow are by no means exhaustive; they’re designed to complement the now normal practice of ultrasonic cleaning, which can occasionally only go so far. Our XS650 carbs were in a truly vile state; sometimes desperate situations call for drastic action. Last run thirty years ago and then left to stand, time hasn’t been too kind to these Mikuni-Solex carbs. Dirty beyond belief. Action is needed if they’re ever to work again properly. 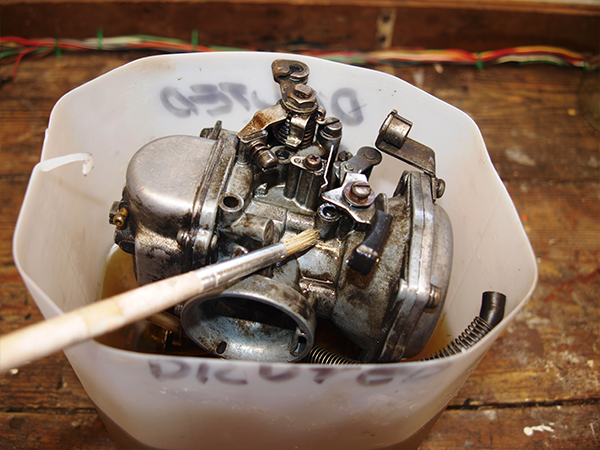 Before they see the sonics tank, these babies get a bath in cheap brush cleaner...with a cheap brush. Getting the worst of the external crud off means the sonic tank can tackle the ingrained stuff faster. Substantially cleaner after their dousing and a quick blast with some aerosol carb cleaner, we can actually take these apart without fear of adding detritus to their insides. 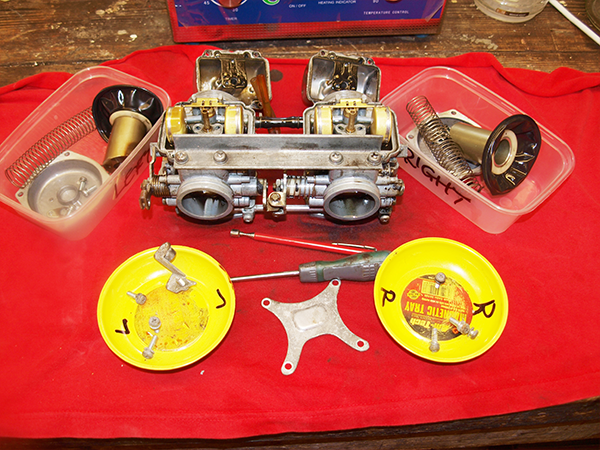 As always, make lots of notes and pictures and use labelled containers for all the parts. Carbs are precision instruments so force should be avoided wherever possible. If the carbs aren’t coming off the interconnecting butterfly spindle, then a right angled driver will be needed to get to the more inaccessible screws. If you’re lucky you may be able to buy OEM parts; otherwise you'll need aftermarket kits. Often options are severely limited but check the parts you buy genuinely cover your model or you may have running issues. 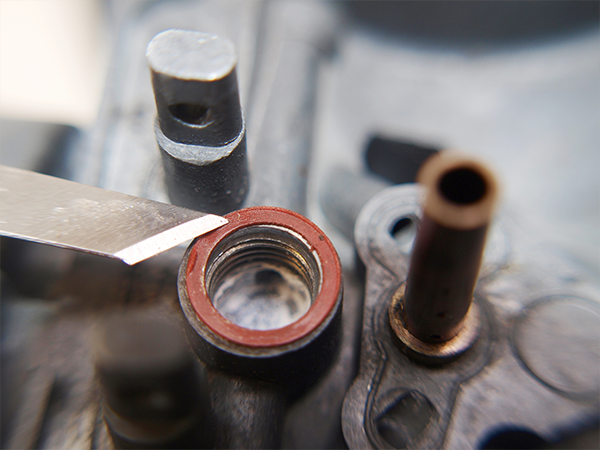 These red fibre washers don’t take kindly to being disturbed. If their sealing surfaces are damaged, broken or gouged your bike won’t run properly. Carefully ease stuck examples off their mounts with a sharp blade. 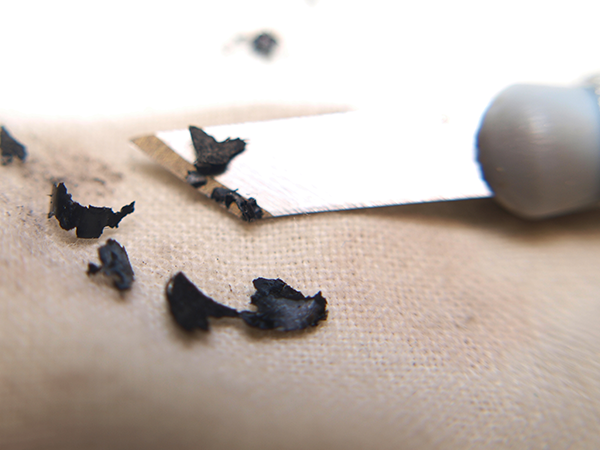 Every last vestige of gasket material needs to be evicted. Paint stripper, thinners or methylated spirits may help loosen the bond. Only use a blade with extreme care or the gasketing surfaces may be damaged. 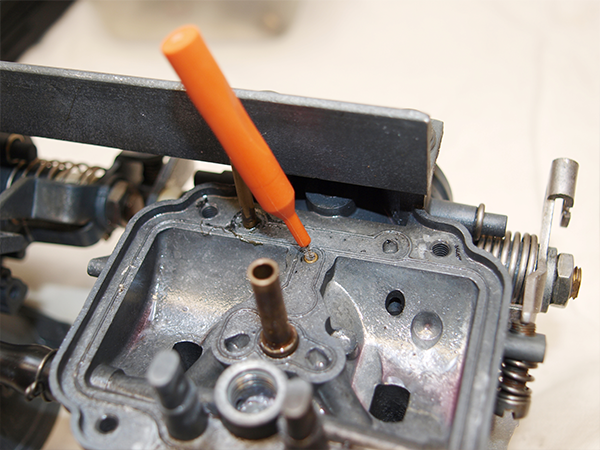 Sometimes there’s a genuine need to prod and poke. A carefully used inter-dental brush is far more preferable to an old length of throttle cable! Soft copper wire can also be used with care. 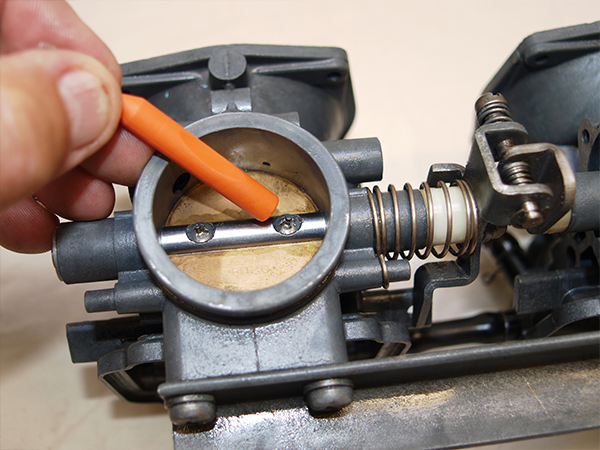 The two screws holding the butterfly onto its spindle have their ends peened over. Unless the spindle’s seals need replacing, do you really need to undo these? Never overlook the choke plunger or assume it’s okay. If it lets by you’ll never get the bike to fuel properly; it’s likely to run really rich. Ensure new springs and washers are the same dimensions as the ones they replace. The Yam has a jet in its float bowl and the brass is often tight in the alloy. Soaked in boiling water and using a snug fitting screwdriver it should come out okay. A broken jet is a thing of pure misery! 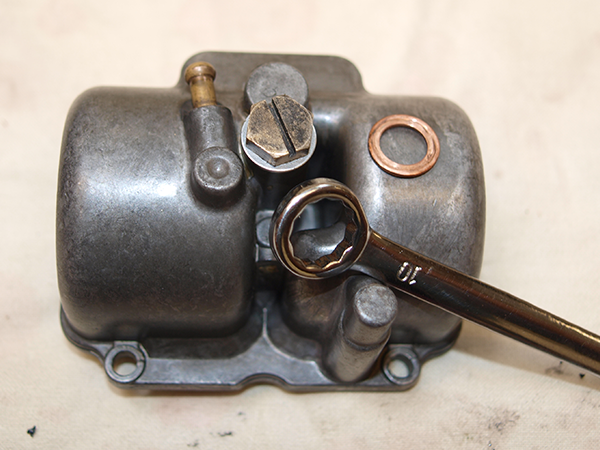 The old washer is worn and scored; use a new one wherever possible. The drain screw doesn’t need to be super tight or you’ll strip the thread in the float bowl and replacements can be a nightmare to source. 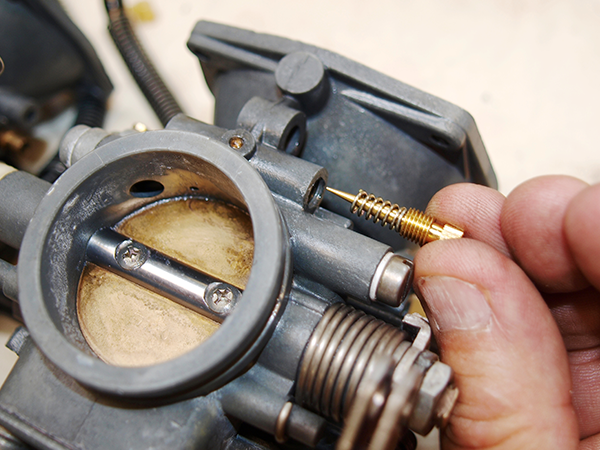 Do the job properly or don’t bother. Always ensure the passages behind the air and mixture screws are free of obstructions and petrol residues. Feel the taper with a fingernail to check for wear ridges and damage. The tiny drillings of the emulsion tube are free, and a new float valve has been installed. The float’s pivot pin needs to sit in circular holes; check if yours have gone oval with use or vibration-induced wear. Our floats have been checked for leaks but we’re not assuming they’re correctly set. Always measure the float height after a rebuild. Manuals or online resources normally quote a figure in millimetres, measuring from the upturned gasket face. 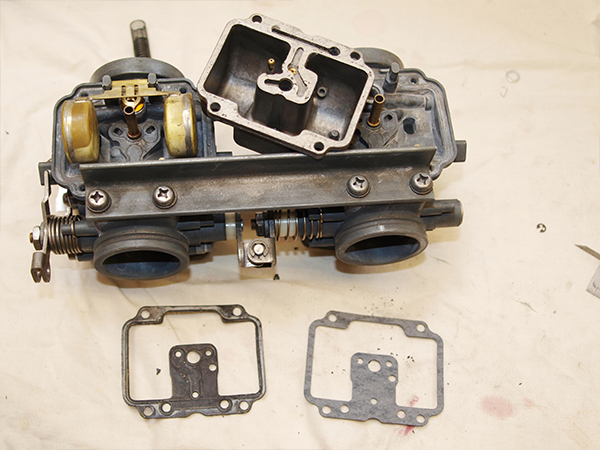 You may be able to reuse a float bowl gasket if it’s not damaged. Ensure patterned ones are identical and do not obscure any vital passages. Note; most gaskets are handed so don’t force one to fit when it won’t. 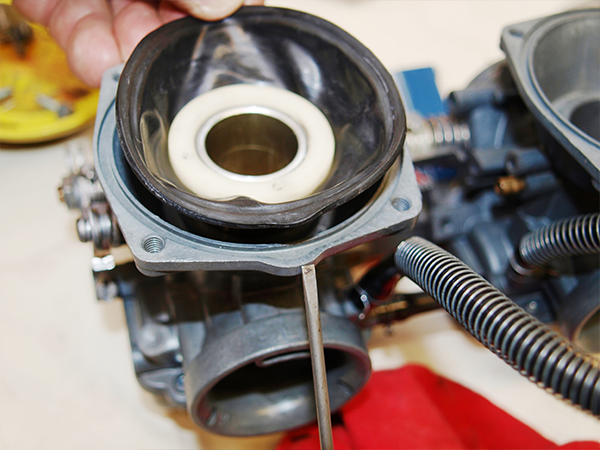 A leaking diaphragm needs to be replaced; it cannot be effectively repaired long term. Most have a register on their tops which orientates the slide correctly.

Go to a show and look at the restored bikes; chances are they’ll gleam in places that were never shiny when the bike left the factory. In many cases the carburettors will carry a sheen that they never had when new. It’s easy to have a pop at what many people perceive as rivet-polishers but there are good reasons why things like carbs look different to the unrestored bikes at the same show. Take your average carburettor on a Japanese bike and it will have three main components; float bowl, carb body and carb top. Now, whilst they may look like they’re all made from the same metal at first glance, in reality they are three distinctly different alloys. The float bowls tend to be made of a tougher alloy with higher silicon content. Easier to cast and more resistant to corrosion, it offers the carb’s designers the ideal material. The main carb body is generally made from a slightly softer alloy that’s more amenable to the various machining processes it needs to undergo for passageways, drilling etc. Typically, the main part of the carb will be an alloy containing zinc and aluminium with small amounts of copper and magnesium. The carb tops are normally the lowest quality alloy the manufacturer can reasonably get away with. If you try to chemically clean the three parts with one cleaning chemistry the normal result will be three different colours or finishes. Float bowls generally come out bright and clean, carbs light grey and the screw on tops often end up badly corroded. Back in the factories circa 1965-1995 each of the alloys would have received a chemical coating, anodising or passivation. Many of the processes are now banned or require expensive equipment that needs precise control measures if the alloy’s not to be damaged. All of which tends to dictate why many restorers opt for vapour and/or soda blasting on carbs. These processes tend to offer a uniform surface finish that’s visually acceptable and not overtly prone to corrosion.

If you buy two manky old carbs at an autojumble the chances are they’ll need some TLC and possibly some parts. OEM components are often available for even some of the earlier classic Japanese iron (but generally at a price). Aftermarket kits often receive some seriously bad PR, which isn’t always justified. Always check the kit you’re looking at is for your actual bike and not a generic “cover-all” set. Many models run subtle differences in pilot and main jets, and these can even vary in a single model year from country to country. The old jets and needles in your carbs are probably the best guides, followed a manufacturer’s part book specific to your bike’s year and country of sale. A set of jets and needles for a USA RD350 may not be the same as those of a UK bike or German market import, so beware.