For a variety of reasons, many manufacturers have over geared their motorcycles and the result is very often a seriously vexing ride. The lower gears seem to propel you as they should, but as you work your way up through the box, you suddenly find the bike is on the very upper limits of its power band in one gear but almost out of puff in the next gear up.

Sometimes the cause is the internal gearbox ratios selected by the manufacturer; Honda’s CB72/77 are a prime example and there’s not a huge amount that can be done on a cost-effective basis to get around this. However, the vast majority of cases are probably attributable to the gearing of the final drive cogs. Check out any race team worth their salt and they’ll always have a box of sprockets they can play around with to suit any given circuit. There are formulae that you could lose a weekend to that might or might not get the most out your bike. But to be honest, with a little lateral thought, a few quid, and possibly a bit of engineering input, it’s entirely feasible to turn a frustrating bike with apparent potential into something that’s a pleasure to ride.

It doesn’t matter what sort of bike we’re dealing with, Japanese, British, American or European, they all adhere to the basic laws of physics. If there’s insufficient torque for a given set of conditions (e.g. road speed, engine speed, inclines, prevailing winds etc) the bike simply will not pull the gear you’ve selected. The prime example would be trying to pull away from standing start in third gear, which we all know it’s not feasible.

In the frame this month is the perfect example of over gearing, courtesy of Motorradwerk Zchopau better known as MZ. The bike only has four gears and, in its standard set up, has to be mercilessly thrashed in third before it can be dropped into top. Any inclines or headwinds very quickly reduce progress and normally mean perpetual third and fourth gear swapping back and forth to the point of tedium and beyond.

The standard gearing reads 21 teeth on the gearbox and 45 on the rear wheel. The parts book shows there’s a 17 tooth front sprocket available but no alternative rears, as the drive train is fully enclosed and any larger rear sprocket would damage the chain case. Normally it’s relatively easy to change a rear sprocket, and by going up a few teeth on the back cog we could get a result.

All of this is fine if the parts are available for an older bike but, in many cases, rear sprockets were consumed years ago. It’s possible to have sprockets made, but often they are costly and may not match the appearance of period machines. Assuming that we’re looking at over gearing here, the other issue is that we’d probably have to go up four or five teeth on a rear cog to overcome profound issues, and chances are that would then require a longer chain. On the premise that we don’t even know if we’d get the gearing correct first time around, the process could become costly, so this is where we get clever and look at the gearbox sprocket. 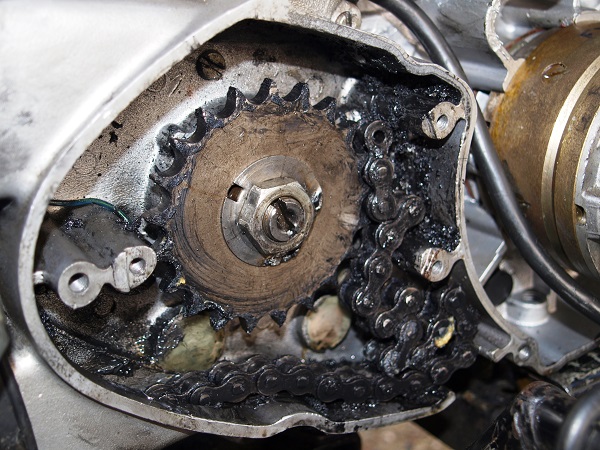 Here we have an, apparently, perfectly good 21 tooth sprocket that’s hampering the ability of the bike to effectively pull third gear in anything other than ideal conditions. With the tab washer bent back and the large nut undone, the sprocket can be removed. A close inspection reveals that whatever else happens, this one is not going back on. 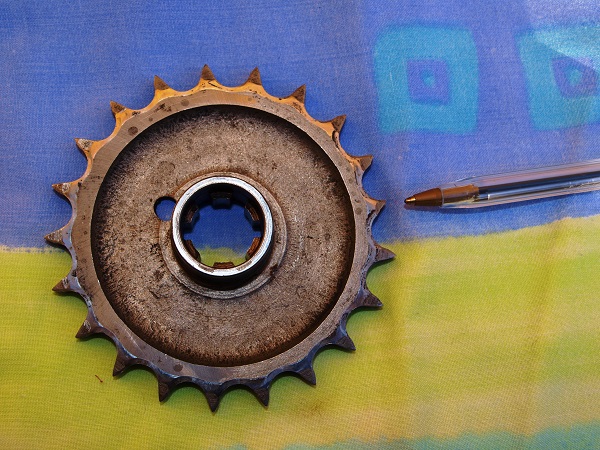 Easily overlooked, one tooth has worn more than the others as indicated by the pen. I can’t think of a similar instance in my nigh on four decades of spannering so it just goes to show you’re never too old to learn. It’s also apparent that the tips of the sprocket’s teeth are almost pointed, so it’s bin-fodder on two counts. 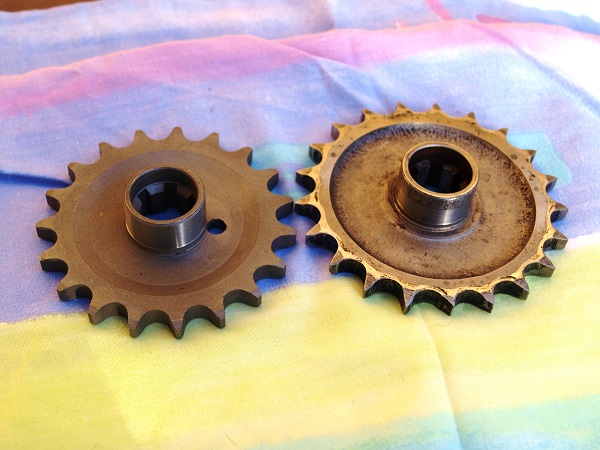 In order to get somewhere close to where I think the bike needs to be I’ve calculated I need either a 19 or 18 tooth replacement sprocket and I’ve been lucky in finding the former. A comparative shot shows the difference in size and also the how worn the old sprocket was. The new sprocket is slid back onto the gearbox shaft, but not before we’ve fitted a new tab washer. 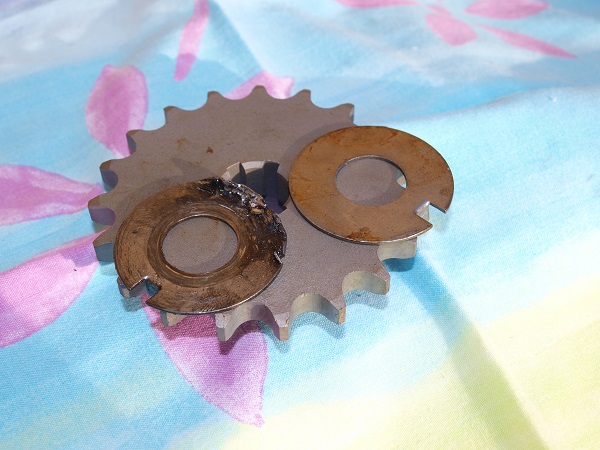 Comparing the old and new side by side, it would be hard to think of a good reason to reuse the manky one. Sometimes it’s possible to rotate these tab washers around and re-use an undamaged face, but it’s not good practice and in this instance, it’s not physically possible. All that remains to do now is refit the chain and take up the slack generated by the smaller front sprocket. Splint link chains may well be an anachronism in these brake horsepower obsessed times, but they do make life easy when it comes to doing jobs like this. The only real headache is getting the two ends of the chain in line and at the correct distance apart so that the back plate and pins can be slid in. Anyone who has ever done this job with an oily chain, liberally greased fingers and a pair of needle nosed or circlips pliers will recall the frustration and blood blisters that inevitably follow. 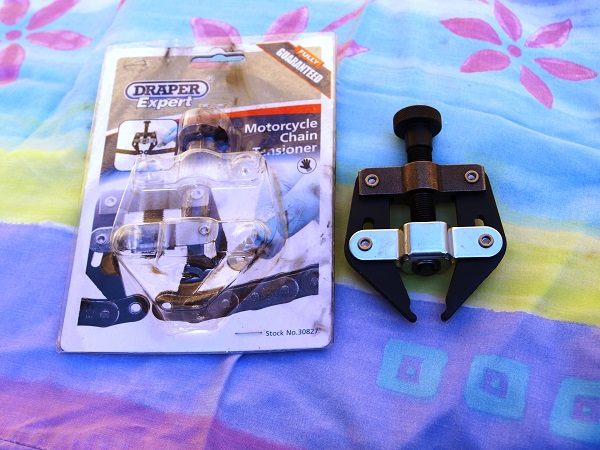 This chain tensioner from Draper Tools is the ideal piece of kit for holding both ends of the chain tightly and parallel. By adjusting the thumb screw, the arms can be minutely opened or closed until the pitch of the two ends matches the split link and the plate and clip secured.

Of course, this excellent tool works on pretty much every normal bike, but as I’m stupidly working on an MZ the chain tensioner won’t fit because the chain gaiters restrict access! Again a bit of lateral thought pays dividends and I manage to persuade a small cable tie to do the job. It’s worth pointing out here that this is only a dodge and doesn’t work anywhere near as well as the proper tool; the chain ends twist relative to each other and it requires the patience of a saint to incrementally keep tweaking the tie until the pitch is just right. However, it works better than the pliers routine and I don’t end up with blood blisters, so it has to be a positive move.

Well if I say so myself the results are little short of spectacular, fourth gear is now a viable entity. I can now hook up into top without having to wring the bike’s neck in third, there’s marked tractability in top that was never there before, and the bike climbs my local test hill with its ever increasing gradient without any need to drop into third; this is a real result. My only issue is that the 19 tooth sprocket is a little long legged but rebuilt, the 18 is a little on the peppy side

When you can’t buy a sprocket

The MZ sprocket is shouldered and it’d be costly to replicate it, so we need another option. Different bikes run different output shafts and the opportunity to mix-and-match is limited. This is where the experts come in. With the correct tools and expertise, we can mix and match to give us what we need. It’s perfectly viable to retooth sprockets providing we have something to graft with and onto. 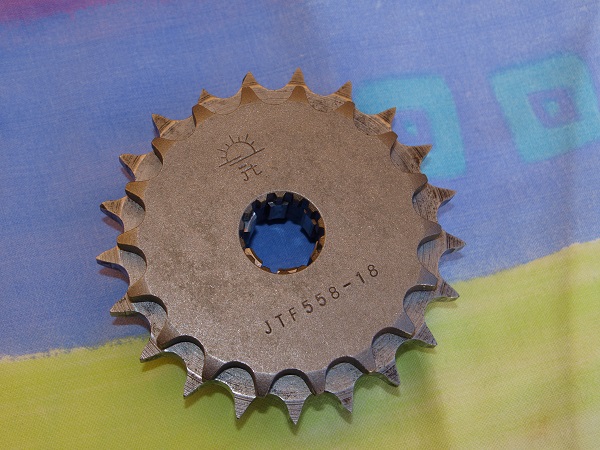 Here we can see a new, flat 18 tooth sprocket with the shouldered, old damaged unit. With a set of teeth of the right chain pitch and the old sprocket, it’s possible to graft the teeth of a good sprocket onto the carcass of the worn one. 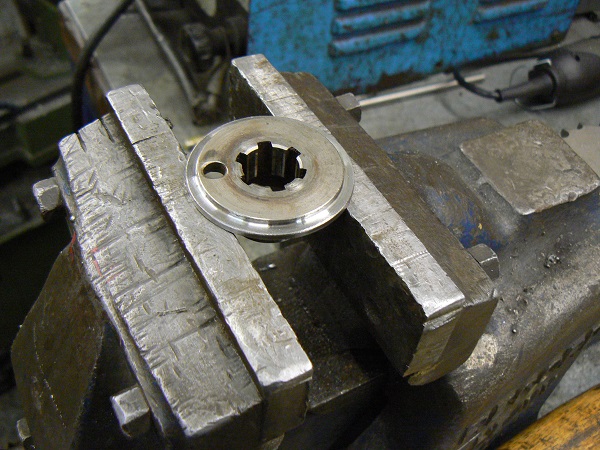 Here the teeth have been removed from the old sprocket and a register machined in the remaining metal. The reverse operation is carried out on the new sprocket; its centre is being removed and then a mirror image register machined in it to match the old inner sprocket body. The two component halves are then checked for alignment, thus ensuring the outer sprocket teeth sit correctly on the old inner and maintain the correct chain run; a reasonable circumferential gap is left between the two halves to ensure we get a total, intimate and continuous line of weld. After some precision welding the job, as they say, is a good ‘un and the sprocket can be fitted and used with impunity. Please note some sprockets are incredibly hard and require ceramic cutting tools. If you try this at home and your tungsten carbide tool glows red you need a ceramic one.