Carburettors are no more than overgrown scent bottles, that is, after all, where the basic concept came from. In actuality they’re significantly more refined, normally amazing accurate and generally prove to be reliable. However, they can go wrong, are prone to tampering and can clog up after years of little (or no) use.

Before we start ripping things apart, it’s always worth establishing that the carbs in question are actually the correct ones; either check with a parts book (not a third-party manual, which are often infamously generic) or compare against a known machine. If this is your first time at carb fettling, take your time and don’t rush. If the bike is a multi-cylinder machine, strip one carb down at a time, take note’s and/or pictures and refer to an untouched unit if you need to know what goes where or how.

There are normally two adjustable screws in the sides of typical Mikunis; a tick over screw that raises or lowers the slide and mixture screw that controls the air during tick over. Assuming your bike was running okay before the bike developed a problem and you needed to strip the carbs, the settings of both should have been correct. Before you take out the screws, gently wind them in until they are lightly seated; not done up with any force. Note the number of turns as full 360-degree revolutions and use these as your base settings once the carbs are rebuilt; comparing with your workshop manual, the two values should be the same. With a few ground rules established, it’s out with the tool kits and into the carbs. I’m actually looking at two sets of Suzuki carbs to illustrate a range of issues and potential areas of concern, but you wouldn’t normally work like this. On the assumption that I can tell a T125 from a T500 I should be in with a chance of getting everything back where it belongs. 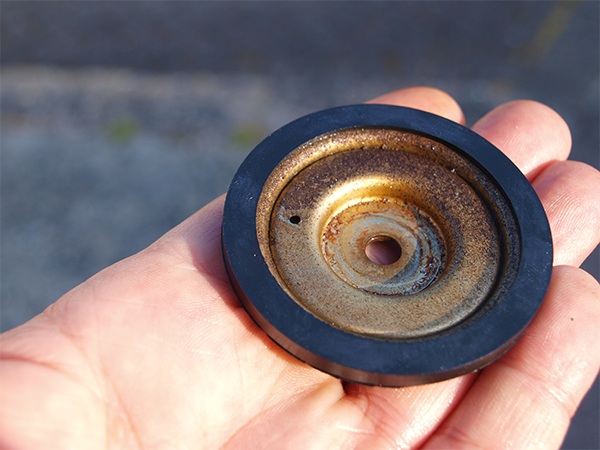 It’s always worth checking and cleaning the filler cap vent is clear; many a bad running problem can traced back to here. 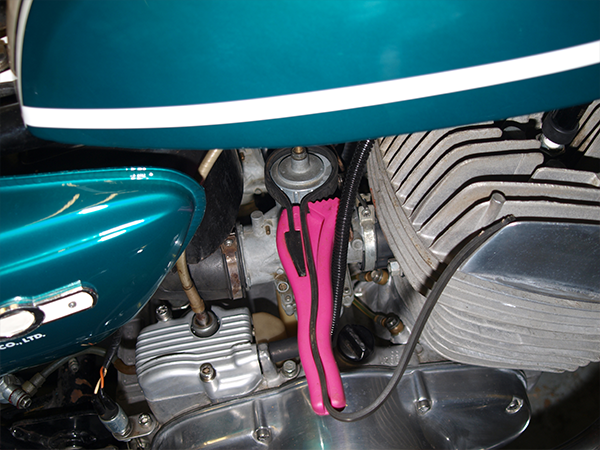 Carb tops should unscrew easily but if they’re tight and/or inaccessible, a kitchen strap wrench used for jar lids works a treat. With clamps loosened, remove the carbs and check all the rubbers for cracking or hardening. Again, a lot of issues can be traced back to air leaks here. If you’re not taking the needle off the slide, store the unit safely. Note the groove in the slide and the cutaway; the latter always faces backwards. 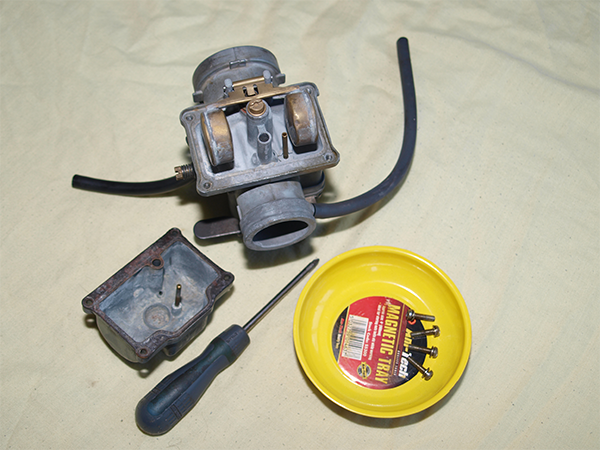 With four screws removed and gentle tap, the float bowl should lift off. If the gasket splits, a replacement is needed but they’re often reusable. 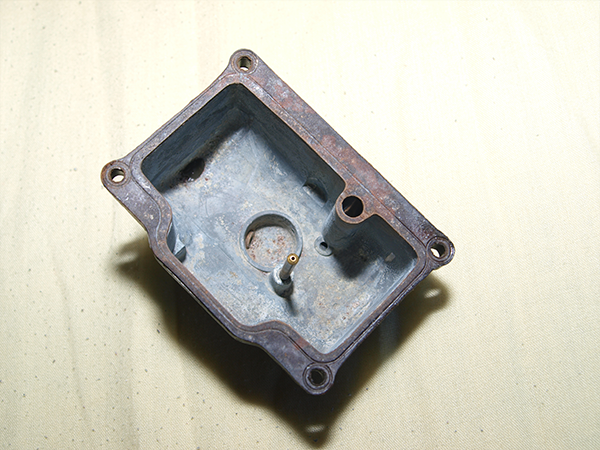 Check the float bowl for sediment or corrosion pin holes from decaying fuel. Minor holes can be repaired with metal filled epoxies. 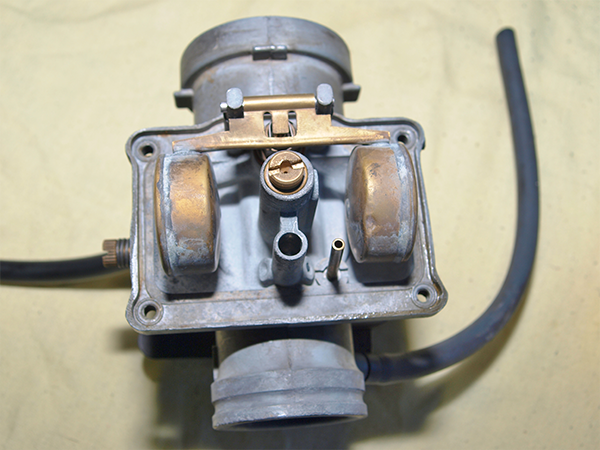 The slotted brass main jet is in the centre, float valve directly above (under the tang of the float assembly) and brass floats to the right and left. 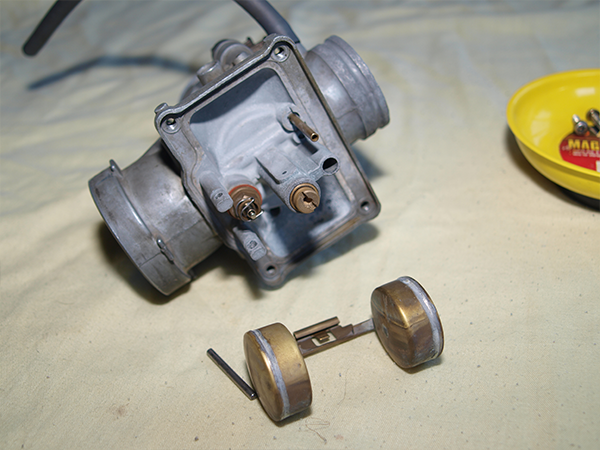 The float pivot pin should 'push fit' into alloy legs; check mounting holes for wear or ovalarity. The float valve is now visible. 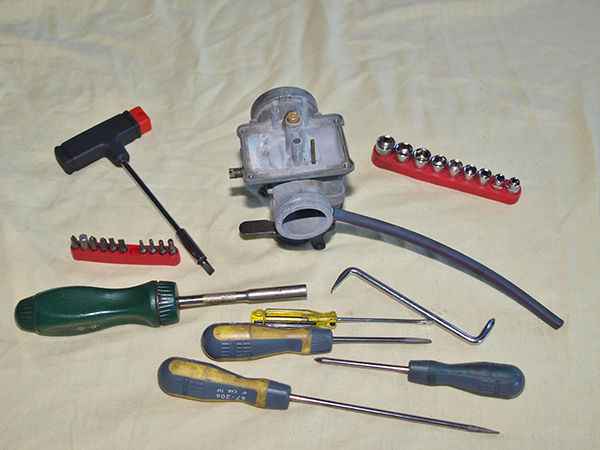 To remove any jets, jet holders etc. the correct tools are a must. Bodging at this point is likely to be unrewarding, potentially frustrating and inevitably costly. 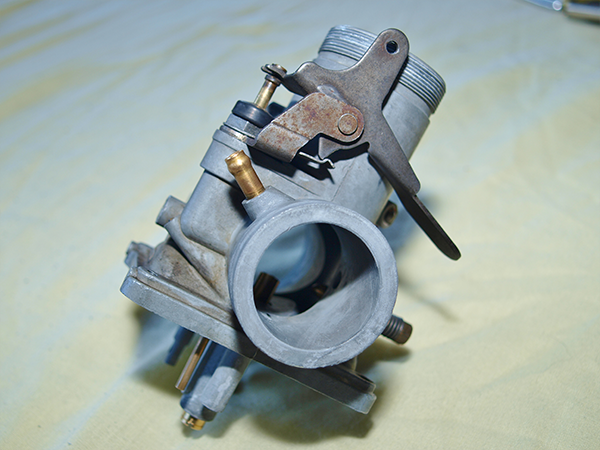 The choke plunger is held captive by the thin nut, which has to be released to lift the mechanism. A thin spanner used on self-assembly furniture may be useful here. Looking from the cylinder back to the air box we can see the tick-over screw in the main throat of the carb, with the emulsion tube in the centre and the main jet below it. 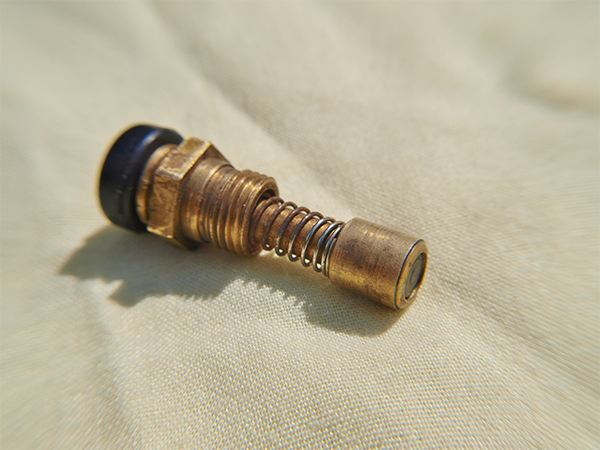 Check the choke plunger; a light groove in the rubber is fine but cracks, splits or damage means the bike will never run correctly. 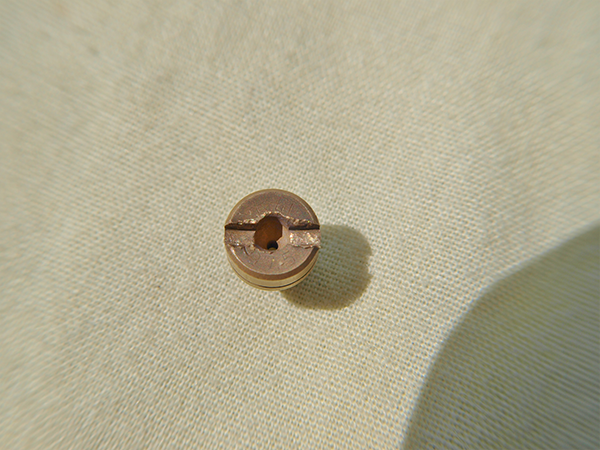 A typical dirty, used and abused main jet; sometimes replacement is the best option and the parts aren’t generally expensive. 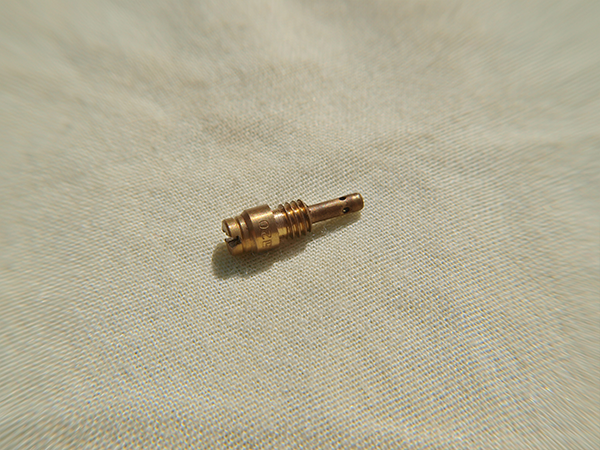 The pilot jet is in good condition and even the radial drillings are clear of major debris. They just need a gentle clean. 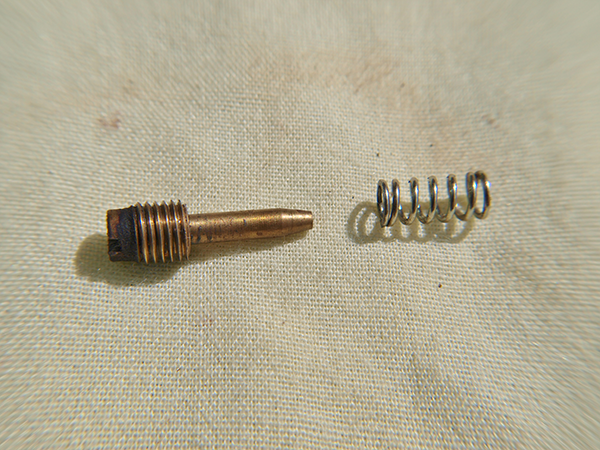 Again, the pilot air screw appears to be in good condition, with only some stale fuel residue and a few decades of grime attached. The needle’s not so good. The rust at the top can be cleaned off but if the main taper is pitted in any way the carb won’t fuel properly. Similarly, it has to be perfectly straight. 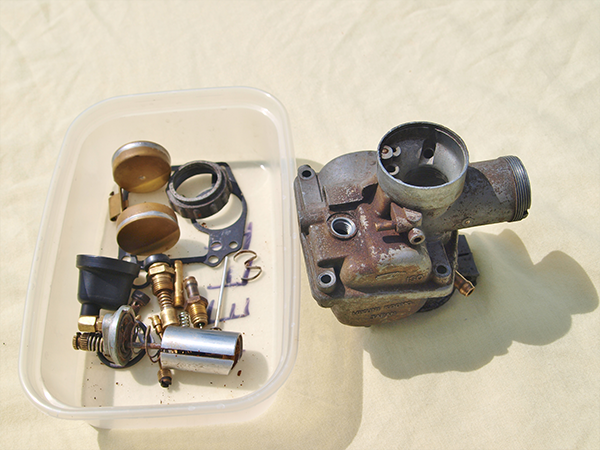 Carb cleaner can only do so much, and this lot needs serious help from the appliance of science. No point in trying to assemble clean internals into a carb body this grotty. 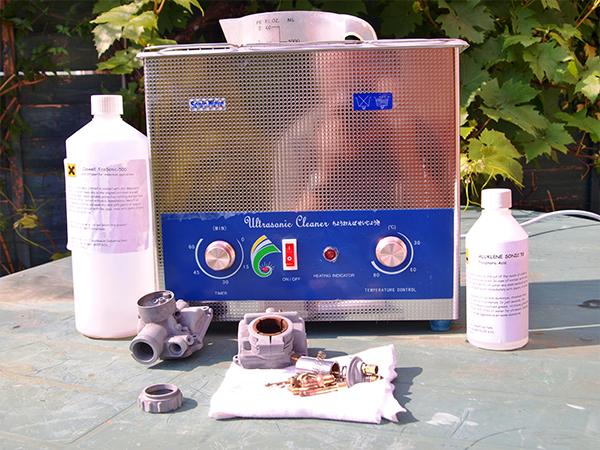 A sonic tank and the correct cleaning materials make carb cleaning a joy. All the parts can go safely in one tank and are then cleaned quickly and efficiently... result! 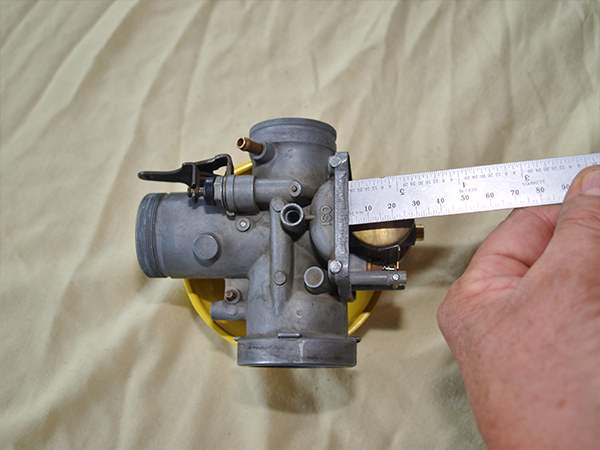 Set the float height from the carb base, minus the gasket. The tang of the float should just touch, and the valve should be literally just closed. 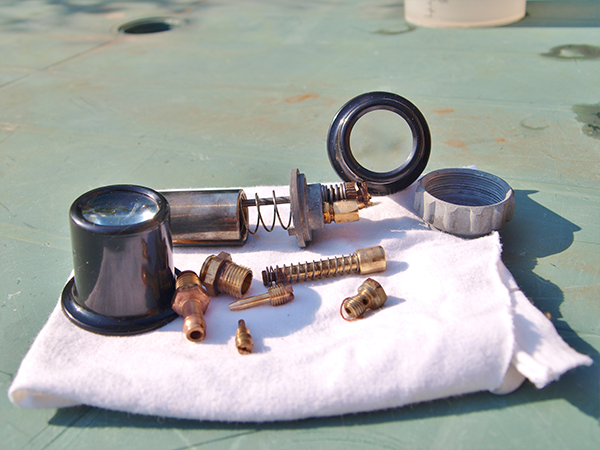 Inspection is key for carb overhauls so invest in the right kit; these jewellers’ eyeglasses were £4 at an autojumble and worth every penny. 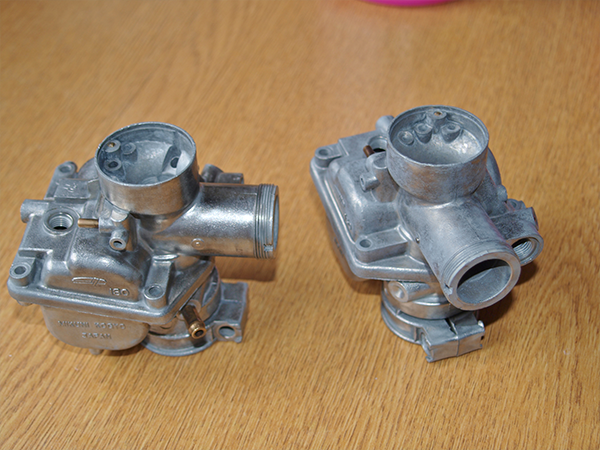 With another set of carbs, a post ultrasonic clean, ten minutes with a Dremel and a brass rotary brush delivers this; not bad for a DIY clean.

Carburettors are delicate instruments, so if something doesn’t want to come apart easily don’t force it; penetrating oil and/or a sudden dousing of very hot water often does the trick. Hot air guns or gas torches should be avoided to obvious reasons. Don’t try digging out jets, passages or drillings with drill bits, screw drivers or sharp wire as it will only create damage and potentially cause running issues. If you really need to have a dig around, try annealed copper wire as it’ll be softer than anything else around it. Old carbs seem to have varying types of crud inside and there’s rarely any one magic cleaning solution. A quick blast with an aerosol can of carb cleaner will generally shift recent fuel residues but older deposits may need a range of solvents. Ultrasonic cleaning tanks have dropped massively in price and a cheap unit capable of cleaning one carb body can be obtained for as little as £25 if you shop around; compare that cost to a weekend of carb-inflicted misery and it sounds like a bargain. If you don’t have access to an ultrasonic cleaner, try soaking the carbs in your chosen solvent for a few days; an occasional stir will distribute the dirt and allow the cleaner solvent to penetrate.  For the appropriate cleaner(s) or replacement parts, look at CMM adverts; they generally have the know-how and resources you’ll need. The old trick of using dilute brick acid may work but it’s overkill and is not a cure-all. Many carbs, and in fact the individual components on a single carb, can be made of disparate alloys. Float bowls are often made from alloys with higher silicon content so they tend to be shinier. Slide tops and some carb bodies are often zinc rich and will really fizz if placed in the wrong cleaning solution. Cleaning carbs in petrol is a bad idea, period. It’s nasty stuff and should not be viewed as a general panacea for cleaning anything. If there’s any doubt about the quality of jets or float valves, then change them; you’ll only curse yourself later when fuel cascades out of the overflow. It’s always worth speaking to dealers who have an interest in older Japanese bike; they often know what parts are interchangeable, can often offer pattern parts for items now obsolete or point you in the right direction to an appropriate specialist.