Classic cars, classic TV shows – can you name them all?

Call yourself a TV classic car expert? Put your knowledge to the test with this fun quiz!

Each model below is a certified classic car celebrity. But can you name the TV series they appeared in? See how many correct answers you can get. (Answers are at the foot of the page)

1/ Mk II Jaguar
Few motors are more inextricably associated with a TV character than this one. In 2004 this vintage 2.4-litre 120mph model beat off rival claims from 007’s Aston Martin and Chitty Chitty Bang Bang to be crowned the country’s all-time most popular car. No wonder it sold for over £100,000 in 2005 after restoration.

TV run: 1987-2000.
Fascinating fact: The principal actor said it was awful to drive. Not surprising, since it was salvaged from a scrap yard for £200.
Clue: The Jag battled with real ale, opera and crosswords for the lead character’s main affections.

3/ Ford 8 Popular
More technical wizardry. The Ford’s remote control self-driving function was used to get this sci-fi classic’s title role out of a tight scrap against a satanic cult in one episode.

TV run: A regular during the third incarnation of the show’s eponymous hero during the early 1970s.
Fascinating fact: Once again, the lead actor didn’t share the same enthusiasm for the car as the character he played. He called her a “right pain in the ‘A’. The bottom gear was too low and the second gear too high. This meant that he had to rev it and the engine “fell into the road”. 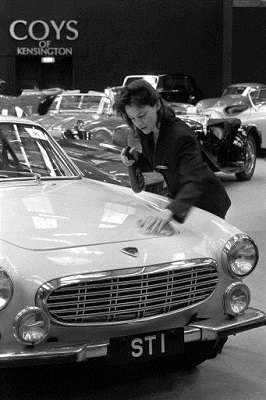 TV run: 1967-68.
Fascinating fact: The producers wanted to foist a Lotus Elan on the lead actor. But he wanted something even more individual; something that would portray even better the concept of freedom, to reflect one of the show’s major themes.
Clue: This programme was mainly shot in the eccentric Welsh village of Portmeirion.

5/ Reliant Regal van
No classic has ever come uglier than this comedy show’s gnarled beauty which has achieved cult status. One van used fetched £44,000 at auction in 2007. It has displayed at the National Motor Museum.

TV run: 1981-2003.
Fascinating fact: One of the show’s more diehard fans got a 50-hour, £4,000 tattoo on his back featuring the van and all the main characters.
Clue: This vehicle was on stage during the 2012 Olympics closing ceremony in London.

6/ Ford Gran Torino
The big white vector stripe amid its brilliant red finish made this baby as iconic as any in 1970s TV. A car purported to be one of those used in this detective double act show fetched 40,000 dollars (£26,560) last year.

TV run: 1975-79.
Fascinating fact: Series chiefs were so concerned about engine damage that it displayed a label on the dashboard asking its handlers not to go beyond 50mph.
Clue: It was the heart and Soul of this show.

7/ Ferrari 308 GTS
This has been described as disputably Ferrari’s “most significant” non-racing car.

TV run: 1980-88.
Fascinating fact: The US detective series so showcased the car that Ferrari lent one to the main character. He sent the car back to Los Angeles, however, and got his father to take it out. Driving a Ferrari around Hawaii, where the show was set? That would be “ridiculous” the lead actor protested.
Clue: Cynics might argue that even this fine Ferrari struggled to steal the limelight from one of the programme’s biggest features: the title character’s trademark moustache.

8/ Volvo P 1800 (1962)
Many 50-something adults grew up wishing they could have got their hands of the wheel of this spy thriller show icon. It was found rotting away on a Welsh farm in 1991. Collector Kevin Price spent a decade accumulating parts plus another six years on its restoration. The startling result was there for the world to see at the 2013 Footman James Manchester Classic Car Show.

TV run: 1962-69.
Fascinating fact: The lead character was so taken by the “beautiful” model that he bought one himself.
Clue: The Volvo may have whetted the lead actor’s appetite for fast cars. Four years later this saintly star swapped it for his new character’s Aston Martin.

So how many did you get right?

Anything over five and you can justifiably call yourself an expert classic car TV show buff!

Sharing a classic car: Does it work?

Sharing a classic car: Does it work?

As part of a recent Footman James survey, we asked whether you’d consider shared ownership of a classic vehicle in the future. The result was rather resounding – with only 22% of respondents being open to the idea. read more>>

Around the turn of the century, two motoring clubs were formed to support the needs of drivers, both of which remain with us today – the AA and RAC. Today, we're taking a look back at the history of the breakdown services. read more>>

Preparing your car for hibernation

Preparing your car for hibernation

Whether to preserve a vehicle’s condition, or due to concerns over unreliability caused by the cold and damp, many retreat indoors and won’t be seen till spring. The question is, what should you think about when planning the hibernation of your pride and joy? read more>>

The RAC announce 2021 Motoring Book of the Year Winners

The RAC announce 2021 Motoring Book of the Year Winners

Earlier this month, the RAC’s Motoring Book of the Year award was presented to Simon Kidston and Jon Pressnell’s definitive history of the Lamborghini Miura. read more>>