This month our Classic Car of the Month post is dedicated to a German classic which has earned its stripes both as a road car and a rally car.

We’re talking about the iconic Audi Quattro, which was produced by the German automobile manufacturer Audi, part of the Volkswagen Group. It was first shown at the Geneva Motor Show on 3 March 1980, and went on to be a great success for this worldwide car brand for over a decade. 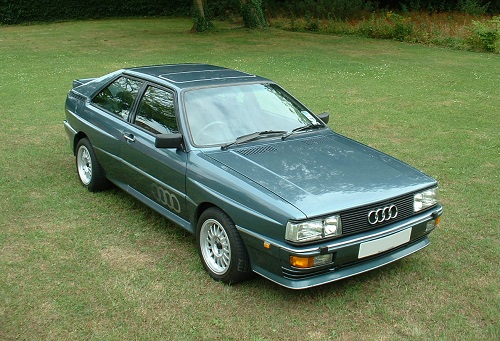 The word quattro is derived from the Italian word for "four", and the name has since been used by Audi to refer to the quattro four-wheel-drive system, or any four-wheel-drive version of an Audi model. The original Quattro models are commonly referred to as the Ur-Quattro, utilising the German prefix for ‘original’ or ‘first of its kind’.

About the design
Assembled in Ingolstadt, Germany, the Audi Quattro famously shared many parts and core body components with the Coupé version of the Audi 80 (B2) range of vehicles. The original Quattro was released to European customers in the late 1980s, and featured Audi's quattro permanent four-wheel drive system - which provided inspiration for the Quattro name.

It was the first vehicle to mate four-wheel drive with a turbocharged engine. The engines are very important to owners and enthusiasts, with many referring to Audi Quattros by their engine codes to allow them to differentiate between the earlier and later versions.

In the production period from 1980–1991 there were 11,452 Quattro vehicles produced, and despite some touch-ups there were no major changes in the visual design of the car. The external aesthetic in particular received very little modification during its production run - a testament to Audi automobile stylist and designer Martin Smith. The infamous flared wheel arches where just one of Smith’s characteristic designs.

Models sold in the USA and Canada cars were built with larger impact bumpers with built-in shock absorbers, like the rest of the 4000/Coupé models. Although they did not have anti-lock braking systems they featured other luxury components including air conditioning and leather upholstery in most of the cars.

The Audi Quattro made its mark on the rally world as the first rally car to take advantage of the then-recently changed rules which allowed four-wheel drive vehicles to be used in competition racing. The Quattro dominated the rally circuit from that point, winning competition after competition for the next two years.

What people thought then and what they think now 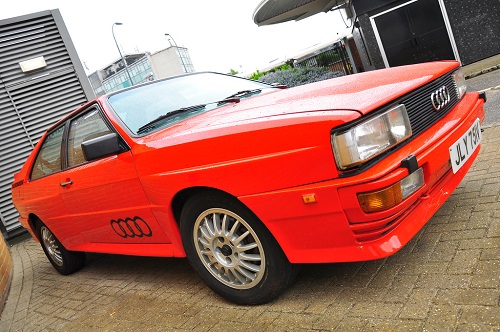 The Quattro was a vehicle credited by many as signalling a turning point for Audi, earning them a reputation for quality and forward thinking that has continued to this day. The Audi Quattro, along with the Mini, is thought to be one of the most significant cars in the post-war era thanks to its use of four-wheel drive in a sleek sports coupe chassis.

A retro red 1983 model Quattro features in the popular UK television drama Ashes to Ashes driven by DCI Gene Hunt, played by Philip Glenister. There is however an issue with the model featured in the show that was set in 1981; the Quattro was not available in right-hand drive in the UK in 1981, only released in late 1982.

Referred to as the Ur-Quattro, production of this first generation of the Quattro continued throughout the 1980s until 1991. The last original Audi Quattro was produced on 17 May 1991.

Do you think the Quattro was a turning point for Audi? Let us know your thoughts at @Footman_James or leave a comment on our Facebook page.

In this next instalment of Ask An Expert, we answer Sean Walton’s question regarding petrol consumption for classics after the 2030 ban on new petrol and diesel vehicles. read more>>

Footman James and rapid-payout insurance company FloodFlash have teamed up to raise awareness about commercial flood risk. We discuss fourive facts that the risk of flooding poses in the UK, and what you can do about them. read more>>

The Automotive Careers Expo has expanded to run alongside the British Motor Show with a focus on growth, diversity and regeneration of the industry. read more>>

Norton Motorcycles are soon to be moving to their new state-of-the-art headquarters in Solihull, West Midlands. read more>>