We are more than halfway through the year now. It has been a great seven months for the classic car community, with shows, rallies and events being held in areas across the UK on a monthly, if not weekly basis.

We’re happy to introduce you to the fifth article in our Classic Car of the Month series. For July, we will be covering the iconic BMW E30 model from the brand’s renowned 3 Series. Launched in 1982, with production lasting until 1993; many saw this vehicle to be the car that cemented BMW as the market leader in the medium sector.

The BMW E30 was the second generation of the 3 Series, succeeding the E21 model. Externally, it didn’t seem very different from the E21. In fact, its external appearance was almost identical. However, BMW made numerous changes to the styling. Major changes included interior features and revised suspension which was to reduce the oversteer issues people had previously had with the BMW E21. 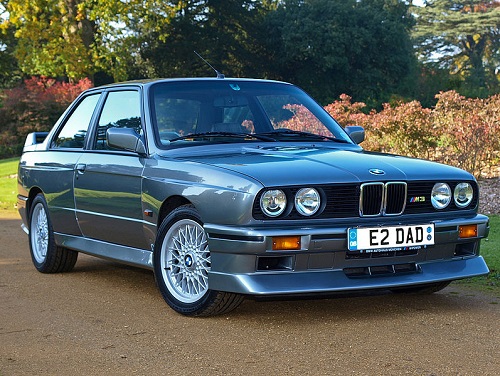 Over its eleven years of production, BMW made several updates to the E30, including one minor update in 1985 and one major one in 1987, which saw the introduction of an M40 engine and various external styling changes, such as a new front bumper, redesigned rear lights, headlight reflectors and many more.

The E30 was made available in a number of body styles over the years, including coupe, convertible, saloon and estate. In its day, the E30 was considered prestigious and some might describe it as a ‘yuppie’ favourite. Available with three-, four- and five-speed manual and automatic transmissions, the E30 was offered with a choice of engines. From launch, four-cylinder 316 and 318i variants were offered, alongside the six-cylinder 320i and 323i. In 1985, the 323i was replaced with the 325i and a diesel 324d was introduced. In 1987, the 316 gained fuel injection and became the 316i, and a turbocharged 324td arrived. An Alpina C2 2.7L was also available, but on special order only.

Since production for the E30 ceased, there have been a further nine models made. It was replaced by the BMW E36. It made a return to the public eye in 2011, when Top Gear decided to feature the E30 on their show in a challenge that involved a four-seater convertible costing under £2,000. Each of the presenters purchased a 325i E30 convertible.

The E30 was very popular during its years of production, making an instant impact on the automobile market. It’s still popular now, turning heads wherever it goes. Honest John describes it as an ‘image defining 1980s saloon’. There are many events and clubs in the UK where E30 still draws plenty of attention. Footman James has built a strong relationship with the BMW Car Club over the years. We know the members there will enjoy reading this. If you own an E30, you should check out their website and see if they have any events coming up. You’ll meet people with similar interests and be able to show off your E30.

We think the E30 is a great example of a German classic. What do you think? Let us know your thoughts on the BMW E30 and the rest of the 3 Series at @Footman_James or on the Footman James Facebook page