This month’s Classic Car of the Month spot has been awarded to the Ford Cortina. The third most popular car ever sold in the UK, the Cortina holds a place dear to the hearts of many.

Here we delve into the history of this time-honoured classic.

History of the Ford Cortina

The Ford Cortina was in production from 1962 to 1982, with almost 2.6 million sold. If your dad didn’t own one, chances are one of your friend’s did. Or perhaps it was your dream car as a child. The Cortina offers lashings of nostalgia and a fun introduction to classic motoring.

The Ford Cortina name was inspired by the Italian ski resort that hosted the 1956 Winter Olympics, Cortina d’Ampezzo, although the original name was the Consul 325. In the end the Mk1 was sold as the Ford Consul Cortina until 1964 when the Consul name was dropped.

The Ford Cortina’s home is Dagenham. The car was designed and built for the British market and created as an economical family car that would sell in large numbers. It was a strategy that paid off for Ford; the Cortina was a huge success and was the best-selling car in Britain for most of its production life.

The second generation Cortina was launched in October 1966 with the slogan “New Cortina is more Cortina”. Although shorter than the previous generation, the new Cortina boasted increased interior space. It was Britain’s most popular new car in 1967.

The release of the MkIII marked the merging of the German and British Ford companies and the convergence of the Taunus and Cortina. When the fourth generation Ford Cortina went on sale in 1976, it was essentially a rebadged Taunus. 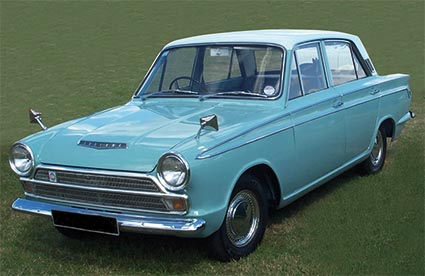 In 1977, the new MkIV Ford Cortina appeared in the James Bond film The Spy Who Loved Me. Although the fourth generation Cortina was the best-selling car throughout its production run it is now the rarest Cortina. It’s thought that this could be down to poor rustproofing and how popular this model is with banger racers.

Announced in August 1979, the final generation of Cortina was released as the Cortina 80. The last model to be produced was the Crusader special edition. It was the best specified Ford Cortina to date and 30,000 were sold, making it the best-selling Ford special edition model.

The last Cortina to roll off the Dagenham production line was a silver Crusader, which was never sold and instead is housed in Ford’s Heritage Centre in Dagenham.

The Ford Cortina is a popular classic car with aficionados all over the UK. Footman James has relationships with a number of owners clubs including the Mk1 Cortina Owners’ Club and the Ford MkII Cortina Owners Club Ltd.

They organise rallies, autojumbles and various other events throughout the year that will give you the opportunity to meet likeminded people and nose around their Cortinas.