Classic Merc The Star Of Retromobile 2016

A magnificent Mercedes-Benz classic has proven to be one of the stars at this year’s Retromobile exhibition (February 8-12).

The iconic car show held in Paris was home to more than 500 marvellous machines.

But topping the list of must-see motors was a draw-dropping Mercedes-Benz 300SL coupe.

With its distinctive alloy gullwings, it looks like something out of Back to the Future and is an incredibly rare car, especially in the UK. 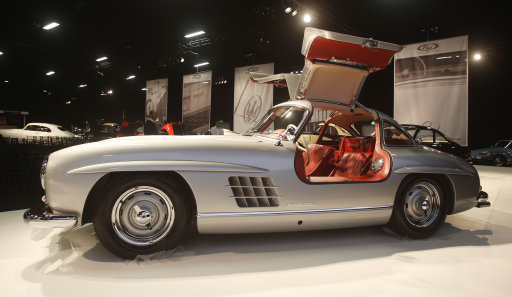 Only two others were ever bought in Britain. It boasts a stand-out red gabardine and elephant ivory tartan inside with corresponding elephant ivory on its exterior.

The Essex-based classic vehicle expert also had many other tricks up its sleeve, including a:

JD Classics’ stand was just one of the many attractions at the French extravaganza. Other highlights included:

What were your highlights from the show? Send us a message on the @FootmanJames Facebook page or send a tweet to @Footman_James