1950s
During the 1950’s motorcycle manufacturers installed several important features in their designs which continued to make the vehicles safer, and perhaps more importantly given the growing motorcycle race scene, faster. Motorcycle fairing or ‘dustbin fairing’ was an increasingly common addition to motorbikes, especially on racing bikes. NSU and Moto Guzzi lead the way with this development, which proved immensely popular in helping increase streamlining and opened the door for more radical motorcycle designs.

Moto Guzzi, Gilera and Mondial lead the world of Grand Prix motorcycle racing in the 1950s. With their range of durable and lightweight bikes Moto Guzzi won several world championships.

Whilst there was an emphasis on the sportbike scene, the social side of motorbiking was also continuing to develop. The Wild One starring Marlon Brando was released in 1953 and represented views of some of the more extreme motorcycle gangs in America which were making the road their home. 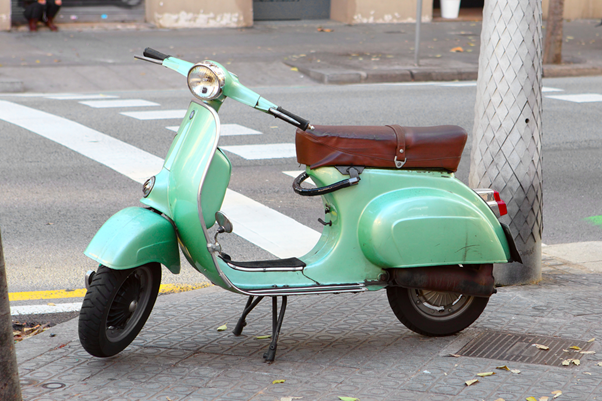 The 60s showed a real divide in demand from motorbikes, almost entirely dictated by the growing social clicks at the time. Mods would never be seen without their Vespa scooters and rockers loved the loud BSA Cafe Racers. Motorbikes had become a much more economical, social transport, and the designs reflected this.

The Cafe Racers was a lightweight, low-powered motorbike. In seemly unconscious contrast to the Vespa scooter, or perhaps chosen because of it, the vehicle was notably minimalist and was designed for speed and handling, rather than comfort. The Vespa was manufactured by Piaggio and was known for its painted, pressed steel unibody.

Hollywood played a big part in boosting the social status of motorbikes. With so many cinematic heroes, especially in B movies, it was easy to see why motorbikes would play such a big role in the image of so many of the youth in America and the UK. In 1969 Honda released their SOHC inline-four engine, which baffled critics by being inexpensive and establishing the across-the-four-frame engine configuration as a design, which would prove immensely popular. In the 1970s’ the Japanese market continued to have a massive influence on the motorbike industry. After a successful advert campaign by Honda, ‘you meet the nicest people on a Honda’, motorcycle sales continued to rise. Because of the growing popularity of Japanese-made-motorcycles, there was a big displacement to the Western market.

The positive of this was that with an influx of superbikes, cruisers and mopeds, motorbike enthusiasts had more choice than ever. The Ducati PS1000LE, Ducati 900SS, Kawasaki Triple, Harley-Davidson XR750, Kawasaki Z1 were just some of the notable models released in this decade. Following criticism that bikes were becoming too fast for street use, manufacturers had imposed a limit of 125bhp in most countries. In reaction to this, and because of increasing pressure to make vehicles more eco-friendly, manufacturers went back to the drawing board and made many new reinventions to the standard model.

The Suzuki Katana was a mutual effort from Germany’s Target Design and Suzuki and resulted in a motorbike design which, whilst looking fairly ordinary to us now, was revolutionary for its time. It used aerodynamic plastic covers, squared headlights and a tall tank design. Its design marked the start of the plastic motorbike design.

The Ducati 750 F1 is a good visual example of the changing designs in the motorbike industry. It was at once both unmistakably modern and classic, with a conventional frame and motor but use of a plastic cover, which was unmistakably new for the time.

Following from the plastic shell focus of the 80s, motorbikes continued to pursue a mixture of style and power, using the plastic covers and advances in technology to create bikes which were as good to the eyes as they were to ride.

Classic style motorbikes and companies like Harley Davidson continued to have a following, and this continued to grow alongside the more sport-bike aesthetic. In 1993 Ducati burst back into the scene with the Monster. In contrast to many other bikes at the time, the Monster was a ‘naked bike’. The bike sold well and eventually accounted for two thirds of Ducati’s output.

A number of the motorbikes from the 90s are now sought after by classic collectors, including the Aprilia RS250, which was produced in such small numbers that it is already a rarity. The Kawasaki ZXR750-ZX-7R was considered to be one of the best looking sportsbikes ever, and this made it just as sought after then as it is now. Collectors of classic motorbikes are all over the world now. Though motorbikes continue to be released by manufacturers each year, there is a desire by many to have a bike with the individual character that was so obvious in motorbikes of the past. Though Honda and other leading manufacturers continue to develop new futuristic designs and engines for their motorbikes, it is only a matter of time before the motorbikes we know today become classics themselves.