Before they were famous: Derek Sharp’s life in cars

Pictured above: Derek Sharp standing next to one of his recovery vehicles, the Antar ex-tank transporter - the largest tow truck in the country.

Derek Sharp has been a Footman James client for over three decades. As a lifelong owner of interesting cars, he has enjoyed his fair share of high-quality motoring, but in conversation with Footman James, he reminisced about two in particular which stand out.

“In 1962, I had already owned a fair number of Jaguars, having started out my working life as a metallurgical engineer, I moved over into owning and running garages, so a lot of vehicles came across my path. The early SS examples, and a 2.5 litre in particular had been lovely, but in 1962, when I first saw the XK120 come in, I knew I had to have it for myself.

The XK120 was by that time 13 years old and so it wasn’t in its first flush of youth. The E Type had just been launched, and was taking the world by storm, but the car was still gorgeous. As a 1949 car, it was one of the earliest examples, number 41 of the 50 in fact. The early cars all had alloy bodies, hand fitted over wooden frames, so they were all truly hand made, and that made it special, even then. 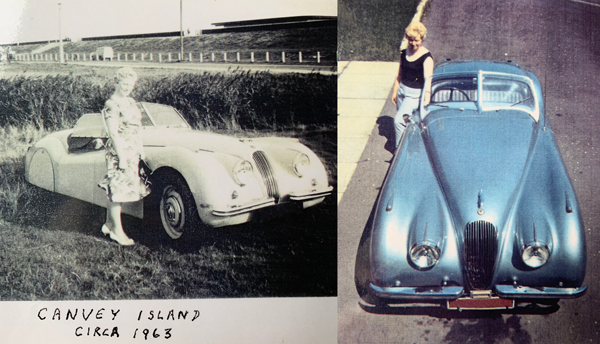 I owned the car for three years, using it as my everyday car. While I owned it, I carried out a fair amount of the mechanical repairs myself, including skimming the head, fitting new valves and a new clutch, while the engine was out. I had it resprayed in the opalescent blue from the new E Type, and it looked wonderful.

I sold it as I was starting a family. A friend had always liked it, so for the sum of £220, the car was his. I had no desire to return to humdrum motoring though, even if I was a family man, so a fast saloon was needed.

By chance, a Lotus Cortina was for sale not far away, and the idea of a saloon with a peppy twin cam engine sounded ideal. This was no ordinary Lotus Cortina however, its previous owner had been a Mr Jim Clarke, and although the car was road legal, mechanically it was still in full racing tune. I enjoyed the car a lot, but as a road car, it wasn’t ideal. The biggest problem was that the ultra-high compression head meant that it would eat through head gaskets constantly!

I sold the car for what I bought it for and moved on to a Ford Mustang Mach 1 which I owned for many years afterwards, but the XK120 and the Lotus Cortina have certainly stood out for me.

I don’t know what happened to the Cortina, but the Jaguar emigrated with my friend to Australia, and I heard no more about it for decades. In 1992 it appeared on the cover of a magazine, now back in the UK and valued at £90,000 which seemed astronomical then, I would imagine they are worth hundreds of thousands now.”

Many thanks to Derek for sharing his wonderful story and photos with us.

Have you owned an unusual car which didn’t seem to be extraordinary at the time, but which has since become a world-class classic? If so, share your stories with us in the comments below.

I WOULD LIKE TO KNOW ABOUT THE ANTAR TOO - I nearly bought one a couple of years ago but just what do you do with it? LOL - although I have had some weird and wonderful cars.

Nice story. I would love to know more about the Antar pickup truck. There’s one at the tank museum in Norfolk, and I think they are amazing!