Do You Live in a Supercar City?

The urban jungle. It’s where the sound of a supercar engine rises up and reverberates along towering manmade corridors like thunder. It’s where optimum admiring glances per miles travelled can be obtained, and where a set of red lights becomes an opportunity to peacock – particularly in London, Birmingham and Belfast, the UK’s top three supercar cities.

Using data collected by the DVLA, broken down by postcode and gender, the luxury car dealership Grange Vehicles has ranked the UK’s supercar city hotspots based on the number of owners registered in each area. 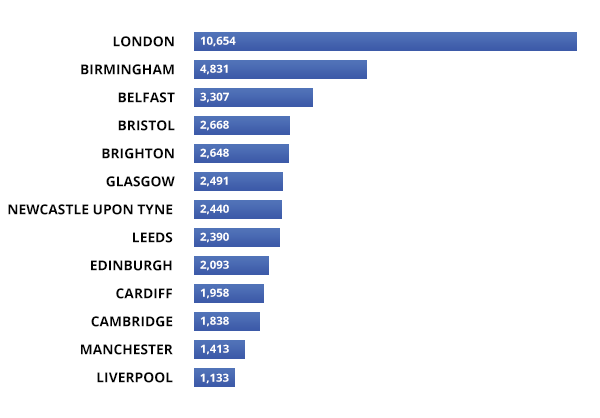 They’ve also identified the type of automotive exotica that’s been driven, and where – with some exceptions. In postcodes where the number of top of the range vehicle owners is 5 or less, the information is held back to protect the identify of individual owners and their cars – most notably it’s women who remain anonymous because of their rarity, and those with a Bugatti to get behind the wheel of, a brand that’s responsible for building some of the world’s most expensive new automobiles.

With 10,654 supercar owners, London has an enviable glut of 130 Lamborghinis and 6,774 Porsches – the nation’s favourite high performance vehicle, and the luxury brand most driven by women.

Outside of the capital, Birmingham has 4,381 supercar residents, with Bentley – a brand favoured by celebrities such as Jennifer Lopez – the high-end ride of choice. Bentley’s made in Britain niche-volume quality has also put them ahead of Aston Martin as the most popular British owned supercar brand in the country. However, this isn’t the case in Newcastle Upon Tyne, Bristol, Cambridge and Edinburgh, where the number of Aston Martin owners is greater than Bentley.

McLaren, the newest of Britain’s supercar manufacturers, has the biggest gender split of all the marques – 93.16% of owners are men, and just 3.44% are female. It’s also the rarest breed of car in Cardiff, Edinburgh and Glasgow. In Belfast, 3% of the 3,307 supercar owners have keys to a Ferrari.

If home is where you park a supercar, make sure both your property and your pride and joy are protected with FJ home and car insurance, as part of our Private Clients Insurance policy.