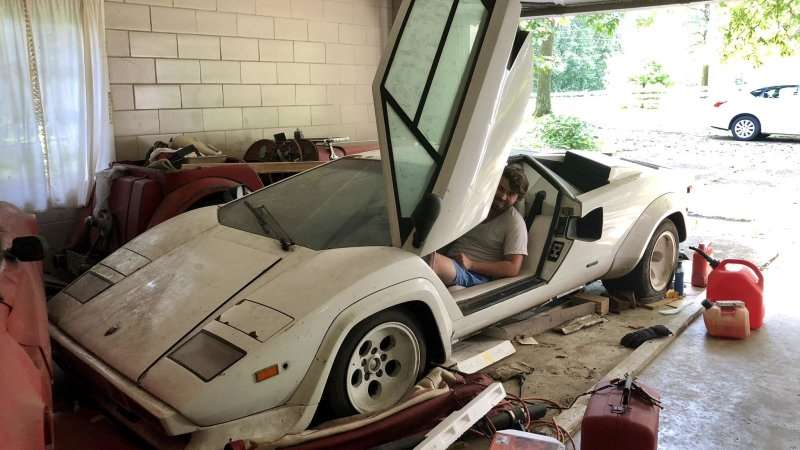 A student in the US has uncovered a Lamborghini Countach, along with other classic motors, while helping clear out her grandmother’s garage.

The 1981 Lamborghini Countach 5000 S was hidden under dust sheets in the garage, surrounded by fuel cans, boxes, oh and a Ferrari 308 and an MG T-series too!

The discovery was made by Reddit user Eriegin, who then posted her find on the social media site, to the shock of other users.

While this might all sound like something of an unbelievable discovery, the backstory to the find does add some context.

As explained on Reddit, the student’s late grandfather ran an exotic car business back in the 1980s until high insurance costs forced him to shut up shop. However, he kept a few of the cars for himself and hid them away in his garage where they were largely forgotten about until this recent discovery.

The cars look like they’ve survived their hibernation in reasonably good condition but will probably require a fair amount of work before they are roadworthy again.

While some have called this a so-called ‘barn find’, Eriegin was quick to point out this isn’t really the case, as she and the rest of her family knew they were there.

She went on to say that while her grandmother was looking to sell the cars soon, none of the impressive collection of motors is officially up for sale.

She added: “If it were up to me, I’d get [the Lamborghini] running again and clean up the interior but keep the exterior close to as is.

“It has character and tells the story of the car which sets it apart from any other Countach around. I can honestly appreciate that more than a perfect paint job.”

If you're lucky enough to own a Lamborghini Countach, why not take a look at our Collectors & High-Value Insurance page?