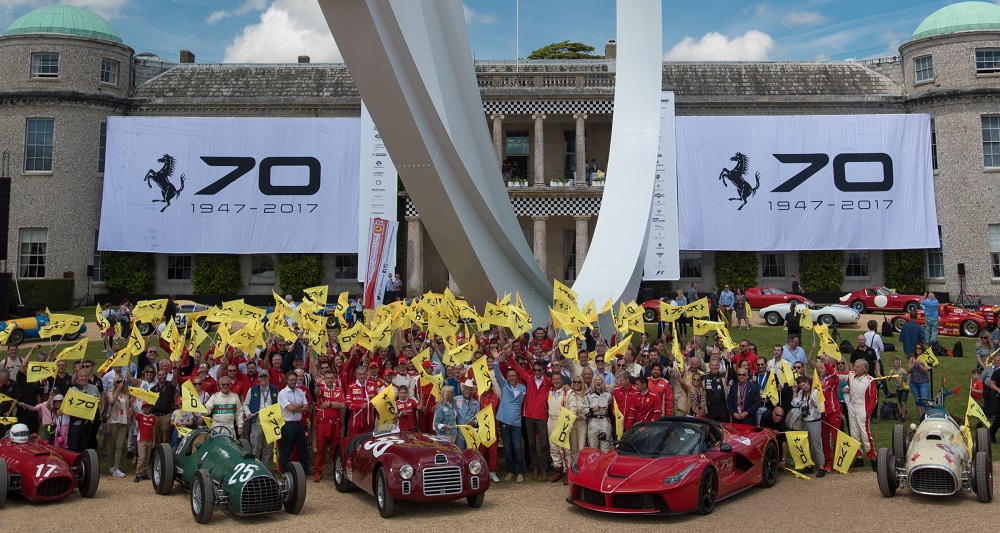 The Goodwood Festival of Speed took place last weekend, from 29 June – 2 July, and the show was one to remember. Stars and cars from around the world gathered at the incredible Goodwood Estate in West Sussex for a weekend of brilliant racing and stunning supercars.

There were plenty of highlights from the weekend, but one marque put on a show like no other; Ferrari. The legendary marque is celebrating its 70th anniversary throughout the year, and it certainly celebrated in style at Goodwood.

History leading the way
What better way to celebrate your 70th anniversary than a perfect parade featuring 70 of your most famous cars?

In a truly jaw-dropping display, 70 fabulous Ferraris, from road cars to race cars, took to the Goodwood Hillclimb. Leading the pack were two cars that perfectly personified Ferrari’s journey over the past seven decades.

The marvellously modern LaFerrari Aperta was joined at the front of the pack by the Ferrari 125 S, the very first car to wear the Ferrari badge. These two truly superb machines led the pack to a display in front of Goodwood House; a sight that won’t be forgotten any time soon.

Legendary cars, legendary drivers
The cars weren’t the only legends on show during the display; the drivers were pretty good as well!

Derek Bell, Jackie Stewart, Dario Franchitti, Marc Gene and Alessandro Pier Guidi were just some of the world-famous names in the driver’s seats during the display.

A concours to remember
As well as the drivers and the display, Ferrari also featured in the Cartier Style et Luxe Concours. There was a category dedicated to the Ferrari 250, featuring the MM Spider, GTO and various GT models of the classic car.

And across the weekend, other special events and displays took place to celebrate the anniversary of one of the world’s finest marques. All that’s left to say is happy birthday Ferrari, and here’s to another 70 fabulous years.

Check out or gallery from the show here.