how a ferrari ended up underground 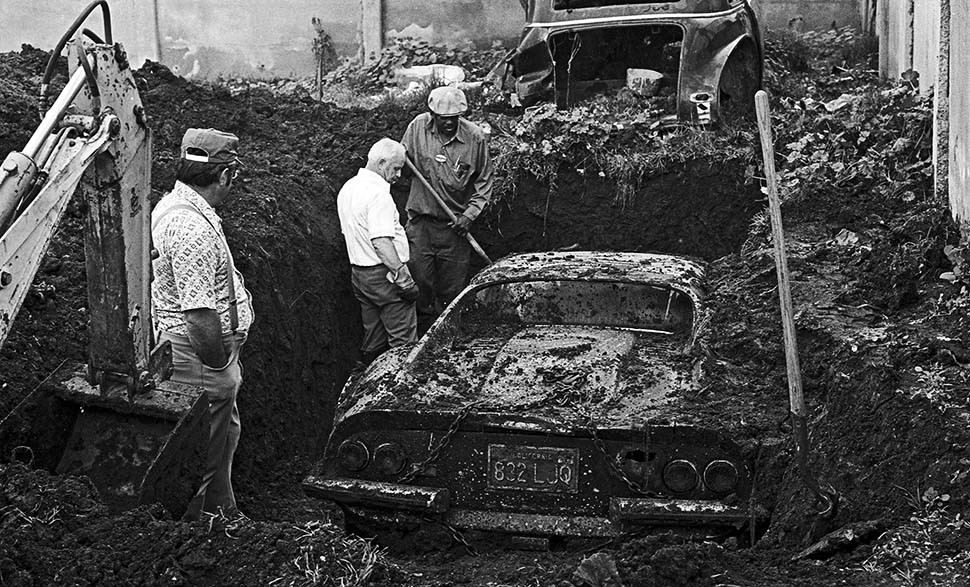 When most children are playing in the backyard, they might unearth particular treasures; worms, discarded chicken bones, or even old coins. But definitely not a 1974 Ferrari Dino.

However, this was the reality for a group of boys in West Athens, Los Angeles in 1978. Digging in their garden, they accidentally struck upon something solid below the surface. Surprised by the discovery of some-sort of buried treasure, they flagged down a sheriff’s cruiser to assist them.

Concealed by the loamy earth, it took two detectives plying at the soil to reveal the metallic-green roof of a Dino 246 GTS, baring the serial number 07862.

The persons who had buried the car had attempted to shield the car, whilst it lay inside its earthly tomb, by laying rugs on top of the once glossy Italian roof – as well as sticking towels inside the vents to protect the interior. Showing that whoever had initially buried it, had at the very least, intended to retrieve it at some point in the future.

Despite the feeble attempts to secure the buried Dino, the windows had unfortunately not been completely closed. As a result the Daytona seating had become tatty, rust pockets and white spots adorned the Pininfarina body and paint. The Campagnolo wheels were also in a state of disrepair.

Yet, the task of tracing the cars history was proving not only daunting, but a cold trail too. The partial truth was eventually uncovered: The Ferrari Dino had been buried as part of an elaborate insurance scam. The car had been bought originally in October 1974 by Rosendo Cruz of Alhambra, California.  It had initially been purchased for $22,500 as a birthday present for Cruz’s wife. It was only a few months later on December 7th (also the evening of the couple’s wedding anniversary), the pair were dining at the trendy Brown Derby restaurant on Wilshire Boulevard, when the Ferrari vanished into the night. 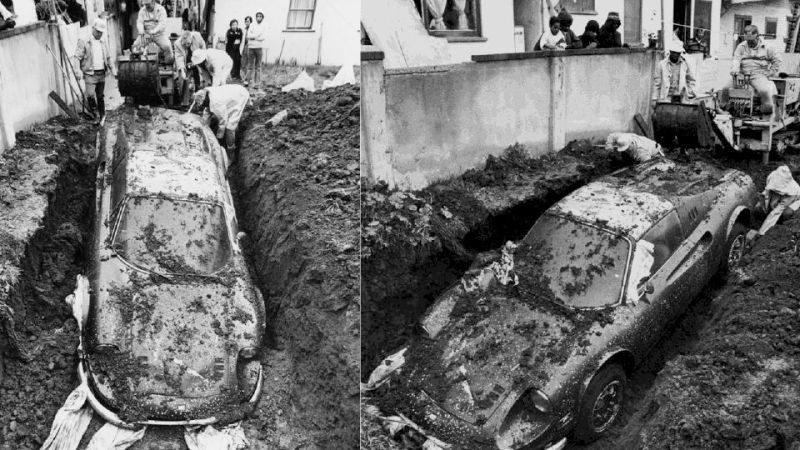 It transpired, years later, that the owner had hired a group to steal the car and dump it into the vast Pacific Ocean – where nobody would be able to recover or find the vehicle. However, the group never managed to get that far with the plan. Cruz, the original owner, planned to create an elaborate story for the missing Ferrari – blaming the restaurant parking valet’s wandering eyes. The hired help was tasked with deconstructing the car into parts and casting it into the sea, though like most things, the scam didn’t quite go to plan and the car was buried instead of submerged. Yet, Cruz still cashed in from Farmers Insurance Group and the car was returned to their ownership.

Even so, this was not the end of the tale – a journalist writing for Autoweek in March 1986, picked up the story and inadvertently sparked a frenzy by announcing that the car had been exhumed in “surprisingly good” condition. Farmers Insurance found themselves inundated with requests about the Dino. Tom Underwood (the insurance investigator) decided to put the car on public display, in a private warehouse in Pasadena, for two weeks where potential buyers could place bids on the car to secure it.

However, the decision backfired, by “…two weeks of sordid pawing, (she) was returned to Farmers missing almost everything not bolted down including her oil dipstick. Few legitimate bids were submitted.”

Underwood decided to call back the original people who had submitted bids, to bid again. A young mechanic managed to clinch the car with a bid between $5000 and $9000. The mechanic owned his own garage at Burbank Boulevard in the San Fernando Valley. After he unknowingly repaired the Dino, the car was duly registered and completed with a new, fitting license plate reading “DUG UP”, alluding to the cars once hectic history.

After all, it’s not every day a Ferrari is buried.

If you own a classic car, why not check our our classic car insurance page to find out how we can cover you.