Fancy cars, sparkling bumpers and squeaky-clean wheels, was the sole reason thousands of enthusiasts swamped the arena to see some of the best vehicles in the country, and even the world, on display.

Footman James always aim to impress, and what better way to do this than by displaying two wonderful examples of the Jaguar E-Type from two very different ends of the spectrum. 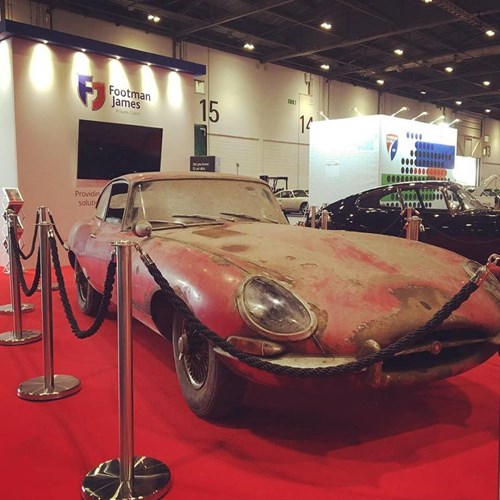 The story of how this 1964 Jaguar E-Type ended up in this condition goes all the way back to 1970 where the E-Type had been laid up until it was purchased in 2017. At the other end of the spectrum, was this rather special 1961 3.8 FHC black Jaguar E-Type, which was the first black E-Type off the production line. Otherwise known as Chassis 84. Luckily, Classic Motor Cars underwent a full nut and bolt restoration on this vehicle, which was completed in 2011.

The Footman James team were also joined by enthusiasts, collectors and motor traders for the launch and re-brand of our Private Client policy. Champagne popping, bubbles and classic car conversation was in true flow at the launch, with talks about Footman James’ brand-new Chrome Collective club, which offers multiple benefits to their Private Client customers.

Over the weekend, enthusiasts also got the chance to win £250 towards their classic vehicle insurance with Footman James as well as being able to register their interest for their car to be a star in Footman James’ upcoming TV advert, which will be shown this year when the classic car TV show, The Car Years airs.

Would the London Classic Car Show be the same without the Grand Avenue? Annually the Grand Avenue has a selected theme and this year’s theme was ‘Firsts’. Whether that be cars which have pioneered new technologies or cars that were the first to display its style and shape. The Grand Avenue was the place to be for petrolheads. 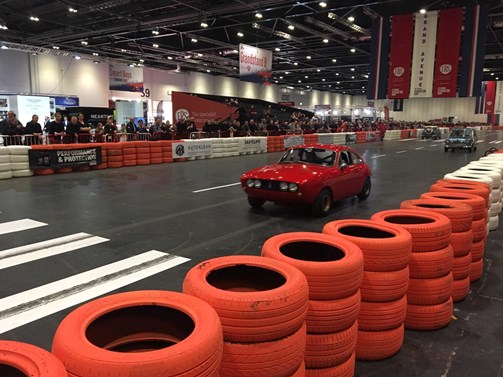 Some of the vehicles parading for onlookers included the Porsche 917 – Icon Recreation, along with other fantastic vehicles such as the Ferrari Testarossa and the TVR 3000S Turbo. We were also delighted to see the very rare Unipower GT, insured by Footman James, parade over the weekend. 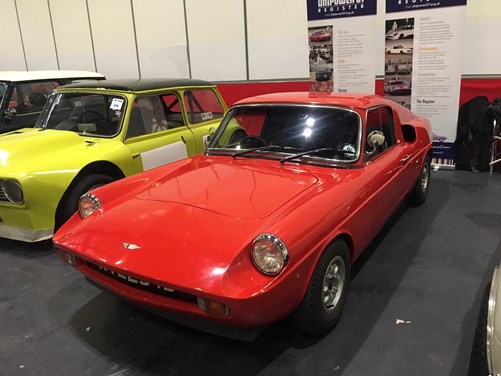 This example was 1 of 71 Unipower vehicles to be manufactured. Made by a classic British specialist manufacturer, this Unipower GT had a complete makeover after it was left in dry storage for almost 24 years! After passing its MOT, the classic car was up and running, just in time for its anniversary at the National Motor Museum on August 20, 2016.

Between 1966 – 1970, only 71 of the models were created, which made this classic car a very rare sight for enthusiasts at the London Classic Car Show. It has been said that only 40 of these classic cars from production survive around the world, with many believed to be in Japan.

As many of us know, Mini is celebrating a major anniversary as 2019 sees the marque celebrate its 60th anniversary. The London Classic Car Show paid homage to the British icon with a special tribute. Even The Car Years and radio/TV personality, Alex Riley, was excited to be on hand presenting and commentating on the Minis as they paraded up and down the avenue.

Talking of icons, this year the London Classic Car Show celebrated the impeccable career of Jaguar’s Director of Design, Ian Callum. Known for some of the world’s most incredible automotive designs you could say that Ian Callum is a motor vehicle artist. 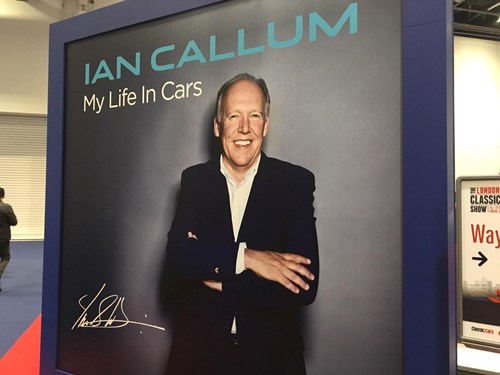 The icon award was awarded on Thursday 14th February where visitors got the chance to see a showcase of Ian Callum’s work, including some of his most notable designs in his career. From the Aston Martin Vanquish to the 2018 electric Jaguar I-PACE, there was plenty to cast your eyes upon. 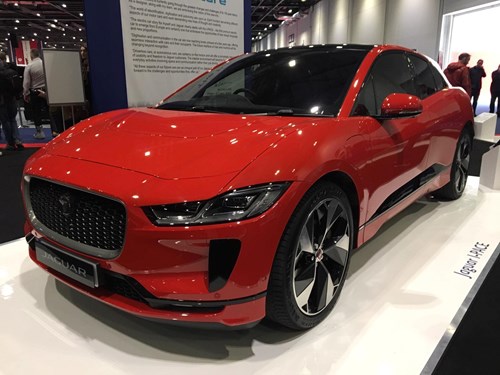 Ian Callum commented, “I’m honoured that The London Classic Car Show has chosen me to be its 2019 Icon. I’m very much looking forward to the moment that I see a collection of my work together in one room for the first time. I’m also excited to share how my car designs have evolved over the years and what my inspirations have been.”

Not only were there celebrations for the London Classic Car Show Icon Award, there were also British celebrations taking place for one of the UK’s favourite classic car films, The Italian Job. To celebrate the film’s 50th anniversary, the show delivered a range of the film’s star cars, including, the Lamborghini Miura, an Aston Martin DB4 Convertible, a Jaguar E-type and of course, the film’s iconic red, white and blue Mini Coopers! 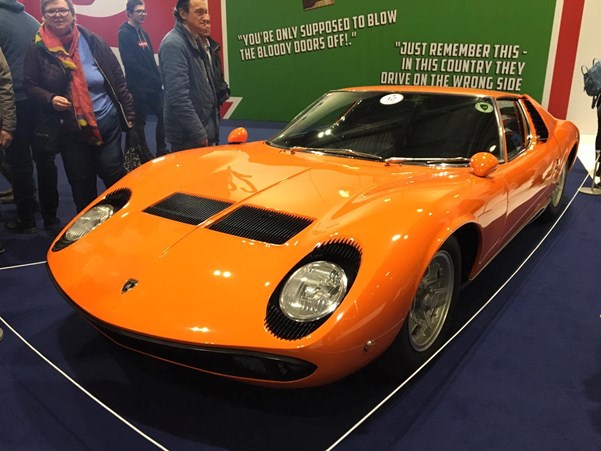 It was anniversaries all around at this year’s London Show as 2019 marks a whole century of the French automobile manufacturer Citroen. 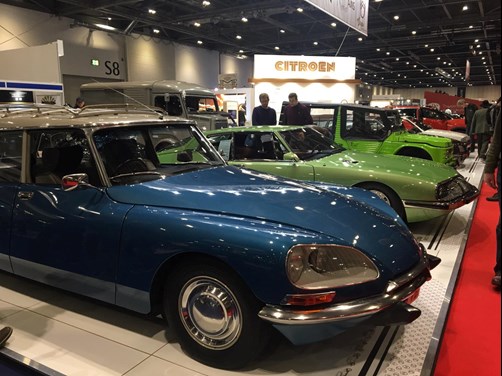 More than 300 models have been produced during its time, and what a better way to display its achievements than by celebrating with thousands of enthusiasts at the London Classic Car Show.

The stand displayed a selection of vehicles that made the biggest mark on the automotive industry since 1919; this included, a Citroen Type H, the Citroen Traction Avant, the Citroen B12 and the Citroen 2CV, just to name a few. 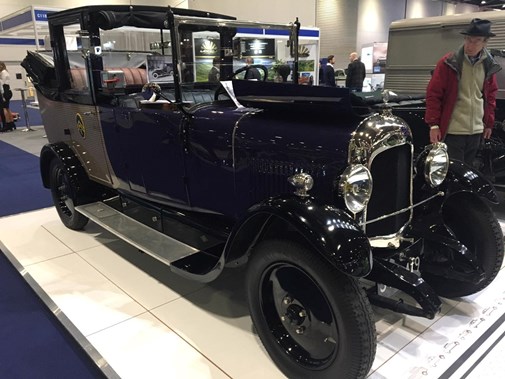 The Citroen B12 was produced from 1926 to 1927, with 38,381 of the model being manufactured. This specimen is the only surviving example of its kind in the UK and is one of few B12’s left in the whole world.

Fun Fact: The Citroen B12 was produced just 5 miles from the Eiffel Tower. Incroyable!

Like the B10, the Citroen B12 was in effect a one-year old model. This was partly due to the challenges faced with the new body marking techniques. Only 17,259 B10’s was manufactured, with the B12 almost doubling that figure.

Returning this year was the favourable Car Club Square, which saw a wide selection of some of the UK’s leading car clubs, including some friendly faces from Footman James club partners, the BMW Car Club and Jaguar Enthusiasts Club. 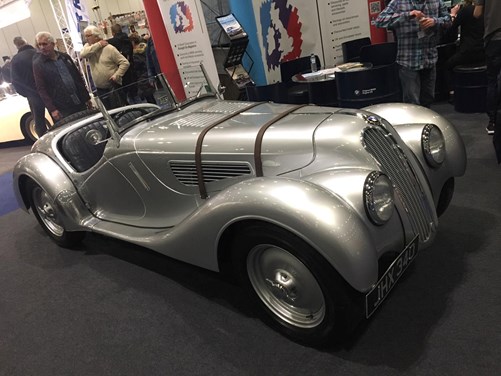 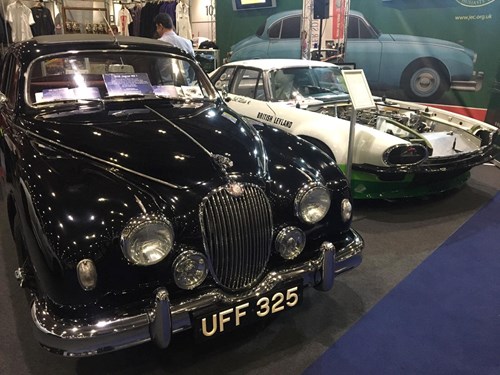 Now the London Classic Car Show has quickly sped by, what’s next in the motoring vehicle calendar?

For Footman James, the Practical Classics Restoration Show 2019 is on the horizon, with the Stafford Classic Bike Show following shortly after. This is not forgetting FJ’s sold out Drive-It Day Tour! To view more upcoming events that any classic vehicle fanatic should attend, click here.

Or, if you missed out on the show, why not catch up over on our photo gallery?