Meet the Team: Introducing David Bond, in the driving seat at Footman James

With more than 30 years’ experience within the financial services industry and a strong passion for classic cars, David Bond has been behind the wheel of Footman James since 2014 after joining the company in 2012. A familiar sight at events and often found in his 1967 MGB roadster, we caught up with him as part of our ‘meet the team’ series, to find out more about his life in cars.

Have classic cars always been a passion?

When I began as a marketing graduate for the Commercial Union in 1988, little did I know that over 20 years later I would be able to combine my career in the financial services industry with my lifelong interest in old vehicles. I joined Footman James in 2012, where I headed up the marketing team, before taking on the role of Managing Director in 2014. My interest in classic cars and motoring has no doubt helped me in this because the Footman James ethos of engaging and supporting the motoring community is as important to me as a driver, as they are to me professionally.

Are you a classic car owner yourself?

I have always had an interest in classic cars, and a fondness for MG, which is for me the quintessential British sports car. The MGB in particular, always appealed to me as a very usable and pretty classic to own. A friend had a 1967 roadster in Old English White that I had admired for ages, so when he announced that he was moving to Australia, I couldn’t help but make him an offer. It’s been the perfect car to enjoy across a range of events in and I try to use it as much as I can throughout the year, so I’m aiming to bring it to the next Coffee and Chrome in January.

Is it important to you to encourage owners to use their classics?

Absolutely! I firmly believe that classic car owners are custodians for the future generations, and what better way to foster enthusiasm in the next generation of drivers than by using our cars and allowing them to be seen on the road or at events? Now that MOTs have ceased to be a requirement for many classics, and with the general knowledge-base on old vehicles shrinking, it’s vital that we all do what we can to support it. At Footman James we try hard to ensure we work towards safeguarding the industry for younger enthusiasts. 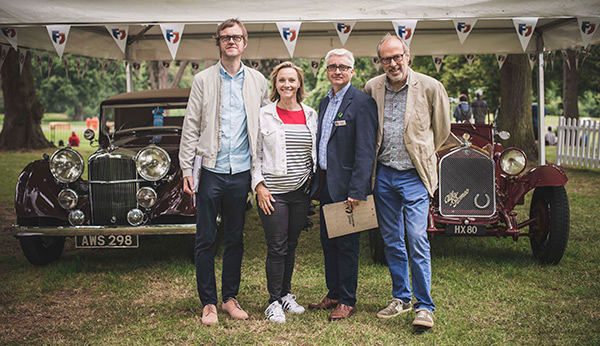 What steps do you take to achieve this?

We take a multi-pronged approach to our support. For the classic car owners, we provide tailored insurance policies that will provide the ideal level of cover for their usage. Above and beyond this, we also encourage owners to get out in their cars by supporting a range of events across the country such as the Bristol Classic Car Show, the Concours of Elegance at Hampton Court Palace and the Chateau Impney Hill Climb. We support as wide a range of events and enterprises as we can, from grass roots club events up to national concours, as well as sponsoring The Car Years TV series on ITV4.

What are the highlights of your time at Footman James so far?

Watching Coffee & Chrome double in size within three events has been a huge pleasure. In order to maintain the friendly atmosphere, we have now capped the event at 500 places, so we can make sure it stays as the family-orientated occasion that it has become. I’m already looking forward to the next one which takes place on 12th January.

Last question – if you could only have two classic cars in your garage, what would they be?

That’s a really tough one, but if I have to pick only two then I would ask for an Aston Martin DB5, and an early 1960’s Mini Cooper. My first car was a standard Mini from 1979 and I have always loved them for their looks, fun and usability as well as for my first-car nostalgia! The Aston Martin must be silver birch with black leather, as for me it is the ultimate combination for the car, and iconic – the name’s Bond.