Has there ever been a bigger gathering of Fords in this country?

Beaulieu’s Simply Ford rally played host to an incredible 1,350 such motors on Sunday, May 1.

Bank holiday sunshine shone on the seventh edition of the ever-popular festival of all things Ford.

The event proved a trip down memory lane, as once commonplace Fords returned to the fore alongside hot hatches from the modern era. 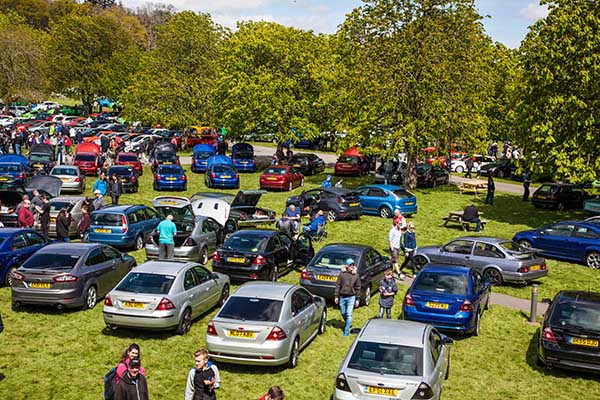 Family saloons from way back when, hot rods and classic restoration projects also shared centre stage in an eclectic mix.

US Fords were well represented, including:

The crowds flocked to see a:

From-new gems were also out in force, such as the:

Arguably the most innovative was the Granada Dorchester limo, a cosmetically-challenged motor which is yet to be completed.

A period-perfect Ford Mk2 Transit led a host of GB transits and it today acts as a support vehicle for Gulf’s racing team.

Rare Probes were out in numbers, with no fewer than 12 turning out.

As many as 29 clubs joined the party, including the Focus Enthusiasts, Focus ST170 Owners’ Club and Electric Orange ST Owners’ Group.

This followed a restoration job which involved a Cosworth engine that Baker says gives the vehicle a more contemporary, albeit “filling-shaking” feel.

What made the former all the more remarkable is that Arkell rebuilt the 1970 Jet with the help of nothing more than YouTube videos.

And Beaulieu’s line-up of Simply events doesn’t end there this year.  Jaguars, Japanese models and sports and classic cars are among those getting their day in the limelight over 2016.