Drum brakes may not be cutting-edge technology but are often more than up to the job of slowing down older classics and later commuters. Just like many other robust devices, it’s overtly easy to take brakes for granted simply because there’s nothing obviously wrong with them…well until they fail that is. Most drum brakes are the very model of simplicity and operate on a set of principles most of us learned back in senior school. It’s only a series of levers, pivots, and fulcrums. We apply force via the brake lever which pulls in the inner section of the Bowden cable which in turn pulls another lever at the hub which acts on a fulcrum that pushes the shoe against the friction band of the wheel hub. This causes friction which slows down the brake drum, the spokes, the wheel, the tire, and ultimately us.

Most Japanese drum brakes are very well designed and have little or no inherent faults. They provide sterling service and generally warrant little attention other than periodic adjustment and occasional cleaning. Not many of us ride sufficient distances to even contemplate replacing brake shoes and the only time you’re likely to consider the job is when you acquire a new classic. The quality of your brakes is a safety-critical factor that cannot be ignored. Do you trust the previous owner to have serviced the brakes? Has the bike been lying in a damp shed for years? Are the linkages free to move as they should? Before you even think about servicing and tuning the engine ready for that first ride don’t you think it’d be a good idea to check out your anchors?

The 200 cc street scrambler (aka Yamaha CS3C) makes for the perfect subject matter. Even though the previous owner knew nothing about when the bike was last ridden, it spent several weeks in a shipping container as deck cargo crossing the Atlantic and was then briefly stored outside under a tarpaulin. I for one am not chancing my arm given that history so the shoes are going to be replaced! 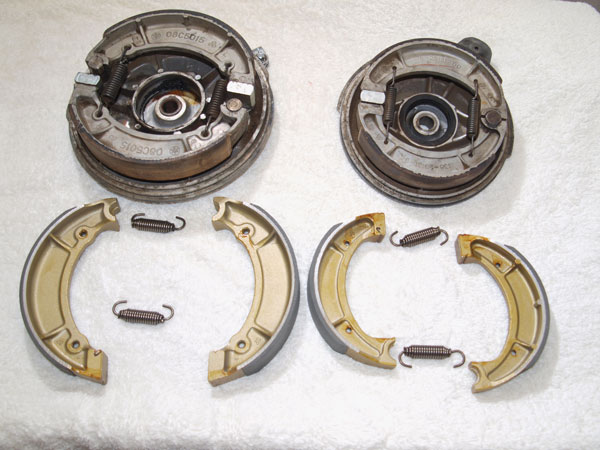 The wheels are off the bike and the brake plates are on the bench. The first job is to ensure the replacement shoes are the same size otherwise it’s a non-starter. 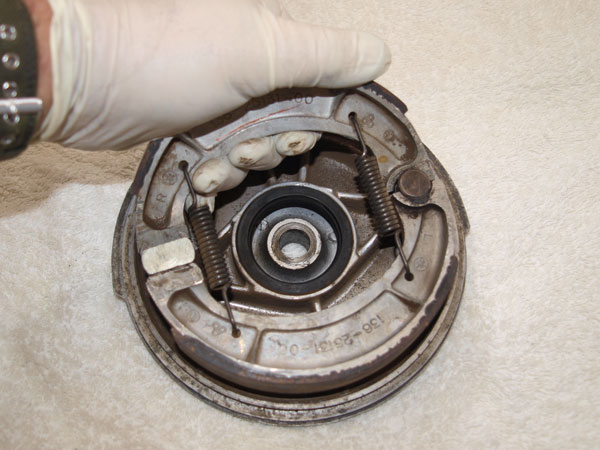 Working outside and wearing gloves and a dust mask, the old shoes can be carefully pulled off the actuating cam and pivot. At this stage, I’m placing both of them and their springs in a plastic bag just in case. 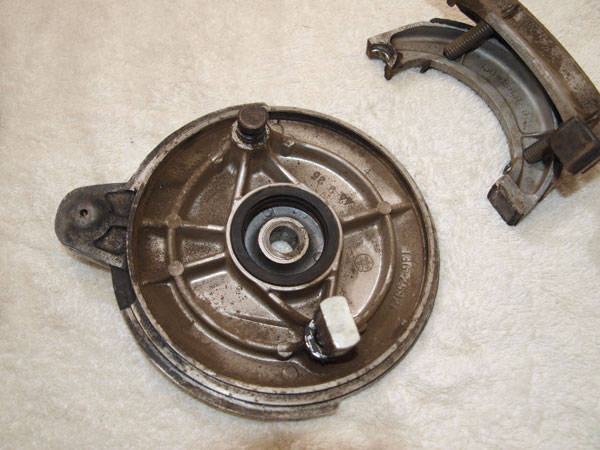 The brown stuff is 1970s brake dust and will, without question, contain asbestos which is a known killer. Do not, under any circumstances, blow the dust off the brake plate or shoes. 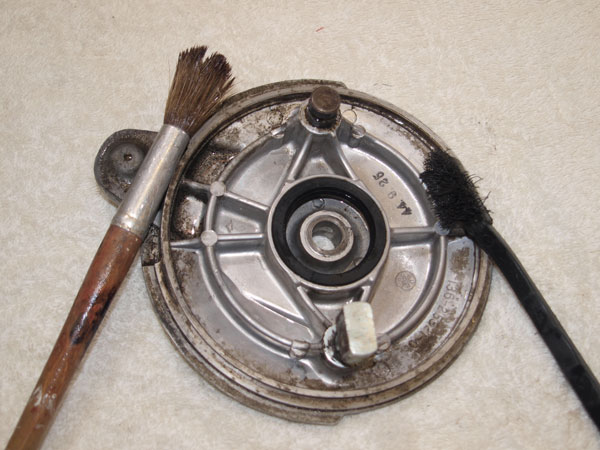 For heavy levels of soiling, I tend to use hot water and detergent to get rid of the worst of the brake dust; most of it comes off easily. Then everything gets a final clean with brake cleaner and brushes. Only after this do I take off my dust mask. 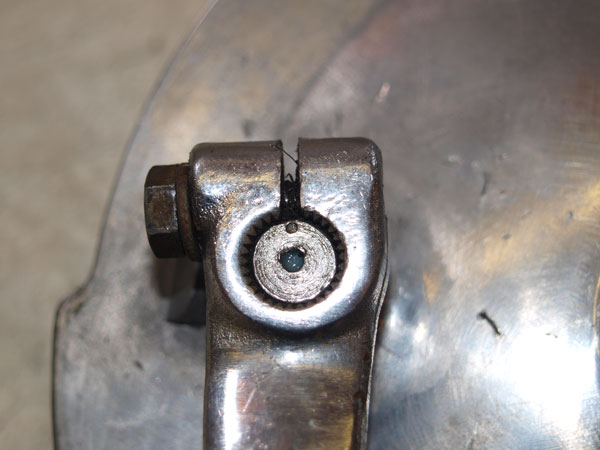 If you’re taking out the operating cam, add a centre punch dot to denote where the pinch bolt slot goes relative to the splines. It saves hours mucking about later when the wheel is back on the bike. 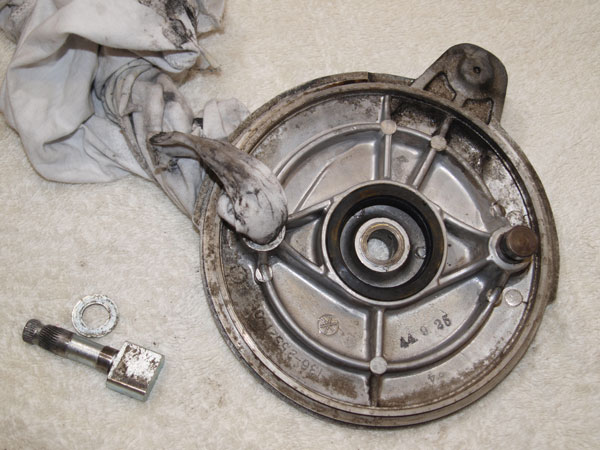 Remove the operating cam and clean the inner bearing surface of old grease and dirt. Also, clean any shims that sit between the brake plate and the cam. Check any oil seals at the same time and replace them if there’s the slightest doubt about their viability. 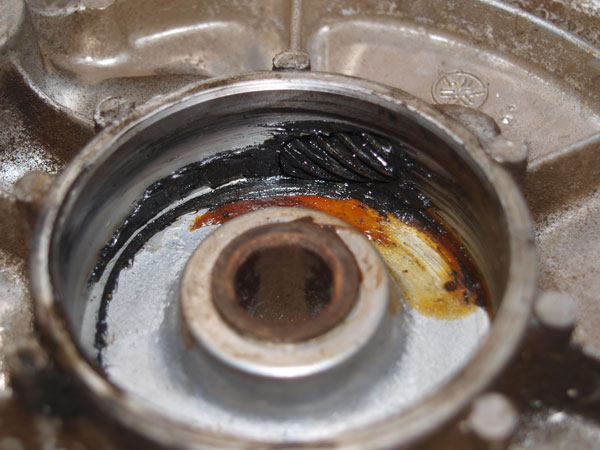 Now would be a good time to service the speedo drive in the front hub. This one was still running, just, on grease applied in 1969. Remove the various parts, hose with brake cleaner, regrease and refit. Again, check the large oil seal or you could get grease on the shoes and braking surface. 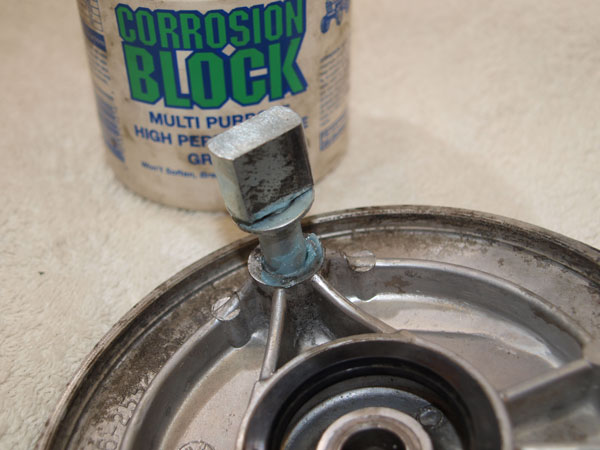 Refit the cam ensuring that there’s a decent amount of grease. It’s better to over-apply then wipe off than be mean with the lube here. 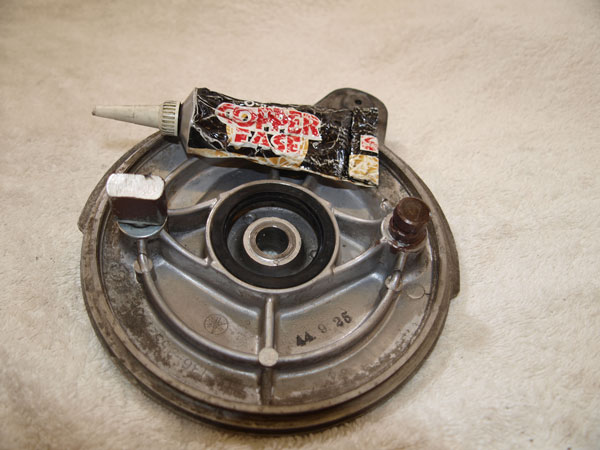 It’s a bone-of-contention moment; some folks don’t like lube on the cam and pivot in case it causes an issue. Personally, Copper Slip or similar has always been my default product here. 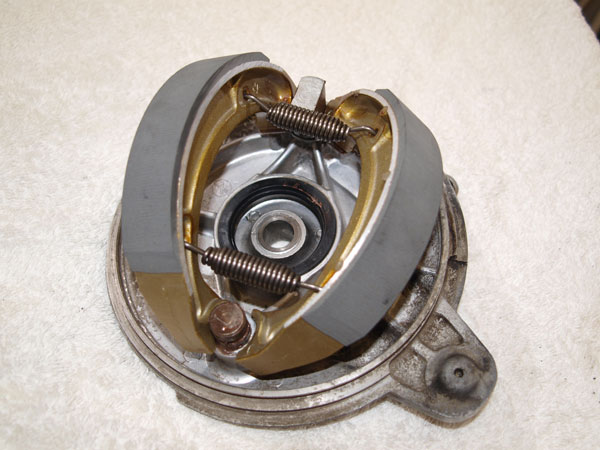 Using the springs supplied, the pair of shoes are placed over the pivot and cam approximately in position. Check everything lines up correctly and that your fingers aren’t under the back edges of the shoes. 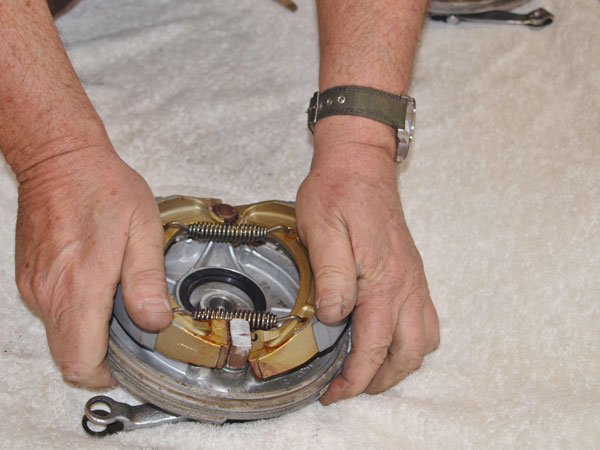 Now, pushing down equally on both shoes, press down and slightly outward. If there’s any justice the shoes almost jump into place. 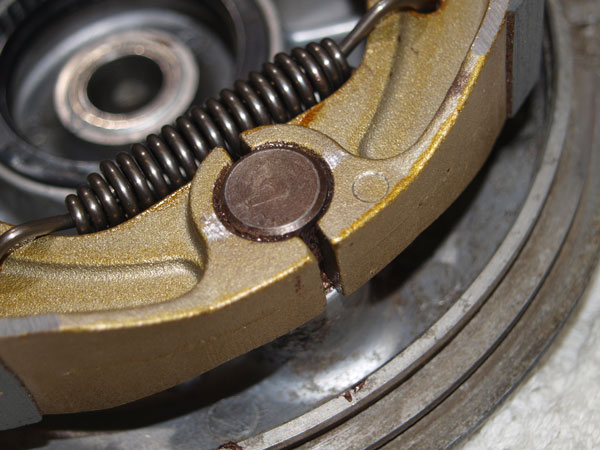 The fit at the cam end should be straightforward but sometimes at the pivot end, the shoes can be a tad reluctant to seat correctly. Normally a tap with a rubber mallet or gentle leverage with a large flat-bladed screwdriver will sort it out. 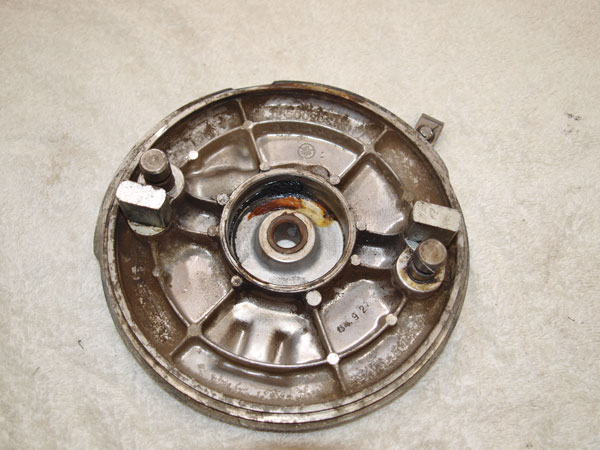 If the bike runs a TLS (twin leading shoe) then you’ll have two operating cams and two pivots to clean and service. Fitting TLS shoes take a little more effort but the principles are the same. 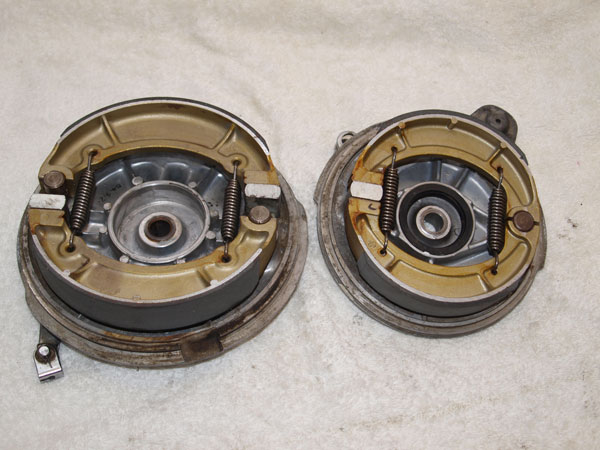 And there are both brakes sorted and ready to fit back into their hubs. Any excess Copper Slip has been wiped away and the brake operating arms reinstalled using the center punch dots.

Refitting the wheels to your bike will entail slackening and backing off the various cables and/or brake rods. Just a millimeter or so extra thickness of brake lining has a disproportionate effect on the operating cables and rods. Spin each wheel around listening and feeling for any obvious binding. If a wheel won’t turn properly, check the operating arm isn’t jammed on. The occasional rub at the same point(s) in each turn is likely to be minor discrepancies between the radii of the shoes and the brake band area. Suitably adjusted, it’s now time for a tentative ride but don’t expect too much of newly fitted brake shoes initially. It’s highly unlikely the shoes will match the drum perfectly; they’ll need some mileage/time to bed in. Within 50 miles everything normally settles down and by 200-250 miles you should now be fully reaping the rewards of your work. One final note of caution – if the rebuilt brakes don’t feel right do not take any chances. Yes, it’s a fag to take the wheel out and recheck everything you’ve done but it’s nowhere near as onerous as overshooting the first bend you fail to slow down for!