Car & Classic, one of Europe’s leading websites for classic vehicle sales, has noted a change in gears of the most popular cars after a year of restrictions and limited activity.

Everyday classics such as the Ford Cortina, Volkswagen Beetle and the MGB GT have dropped in the rankings (the Ford Cortina dropping from 2nd to 9th when comparing year on year) and ‘dream’ sports cars have moved up the priority list for enthusiasts.

The Porsche 911 is now the most sought-after car, sitting pretty at the number one spot on Car & Classic, followed by the Jaguar E-Type. There has also been a notable 39% rise in vehicle searches of the sites top 200 cars, proving that enthusiasts feel it’s now time to invest in their dream cars.

The data also shows other substantial movements and trends; with modern classics rising in popularity and Japanese classics experiencing a surge of interest. The 1980s E30 BMW 3 Series is now the third most searched for car on the site and the Toyota Supra, Mazda RX-7 and Toyota MR2 now featuring in the top 16 with Nissan Skyline moving up 121 spots to 27th place. 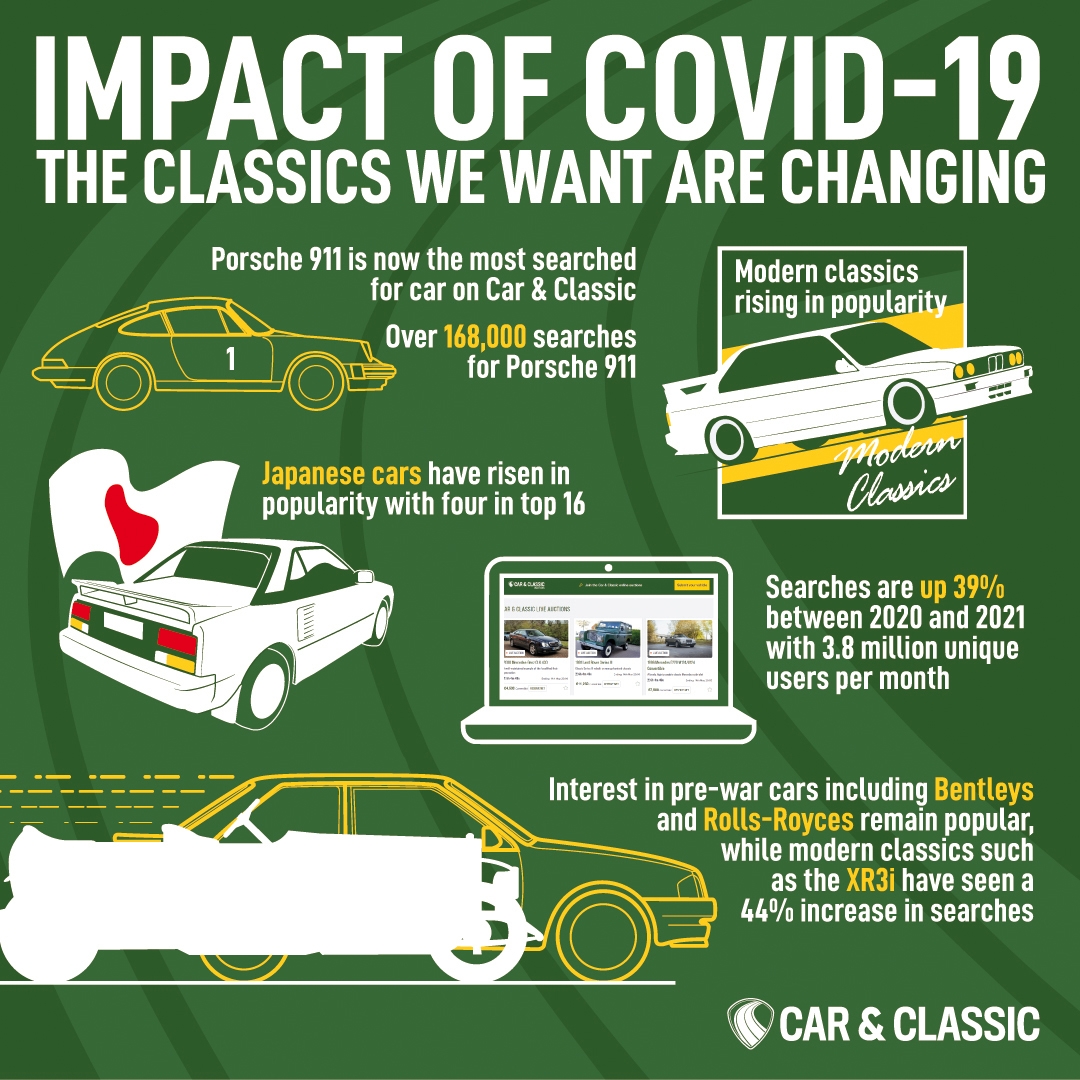 “The searches highlight how the pandemic is driving and accelerating change in the classic car field,” says Chris Pollitt, head of editorial at Car & Classic.

“For some, it has meant more time to start a new project, for others, money saved not going on holiday could mean now buying the dream car they always wanted to own. The data also underlines that the classic car world is always changing. Whether that’s a new wave of cars such as 80s and 90s modern classics that are increasingly in vogue or a new generation of enthusiasts coming through with more time looking for some nostalgia. Or even pre-war or early post war cars becoming more affordable as fashions change. It’s truly fascinating to see what people are looking for. I still can’t quite believe there were 10,000 searches for Reliant Robin!”

Last summer, Car & Classic launched its auction site to sit alongside its classified offering, as a reaction from the pandemic highlighting a need for online-only car sales. The specialised auction site is currently having its busiest period with over 100 auctions on the site in the month of April, the same time that the UK lockdown rules eased therefore proving that auctions are here to stay. You can browse the site at: www.carandclassic.co.uk/auctions