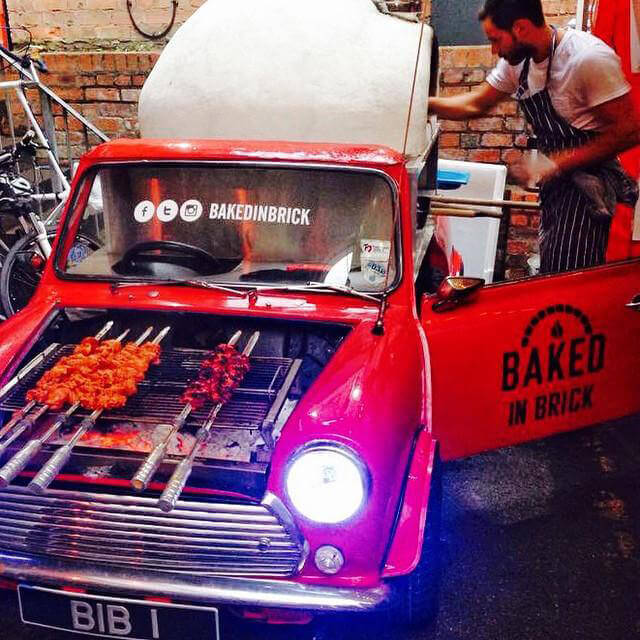 A street food vendor who cooks chicken tikka under the bonnet of a 1964 Mini – and bakes wood-fired pizzas inside it – has just scooped Best of the Best at this year's European Street Food Awards.

A point of difference

“Despite my background in formal dining I’ve always had a love for a more rustic style of cooking,” Lee says.

Adding: “I built a wood fired oven at home in 2012 and after having numerous pizza parties I wanted to let more people taste my food.”

Lee wanted to put his passion for pizza into motion and decided to join the street food revolution.

Richard Johnson, founder of the British Street Food Awards, gave Lee some solid advice: “The quality of food and cooking has to be outstanding, but if you want to be really successful in this game, do something to stand out from all the other traders.”

This sparked the idea of using a 1964 Mini Cooper and with the success of Baked in Brick gained momentum.

A charcoal grill has been placed under the bonnet where Lee marinates his Nan’s chicken tikka. He also bakes naan-style flatbreads in a wood-fired oven inside the tiny classic car.

Firing up the “engine” over his backseat, Lee has turned his hand to some new delicacies which have bagged him pole position at the prestigious awards.

Antje Wewer, one of the judges at the European Street Food Awards in Berlin, enjoyed the food and attitude of Baked in Brick.

She said: “I like street food when you can see how it’s being done. A really worthy winner.”