It’s easy to take the fundamentals of road safety for granted, but there was a time when driving was a more hazardous affair. Over the last hundred years of motoring, general improvements in design, material technology and attitude have all played a part. However – there have also been some stand out ideas, which have undoubtedly saved countless lives.

Although disc brakes were originally developed for early motor cars, as far back as the late 1800s, the concept started to find favour in planes in the late 1930s and 40s. The post-war surge in engineering saw them start to appear on American vehicles, but it was the victory of the Jaguar C-types that competed in the 1953 24 Hours of Le Mans that cemented the concept’s benefits.

Developed by Dunlop, they allowed the cars to brake harder and later, allowing them to drive faster over the race distance. Without the fading characteristic that effects hot drum brakes, and less effected by water, they were quickly seen as the obvious choice for production cars. The Citroen DS was the first mass production vehicle to introduce them to the motoring public just two years later.

Anti-skid systems had first appeared on trains and planes before they made their automotive debut. The original patents were filed in the 1920s, but the first mechanical systems were not successfully employed on race and road cars until the 1960s. They proved expensive and unreliable, but the aviation industry provided the next stage of evolution, and the first fully-electronic anti-lock braking system was developed in the 1960s for Concorde.

The next decades saw development of some of the electrics needed to make anti-skid more effective, but it was the option of ABS on the Mercedes W116 in 1978 that set the template for the systems we rely on today. This four-wheel, multi-channel anti-lock system was the result of a collaboration between Mercedes and Bosch and prevented the wheels from locking up during braking, allowing the driver to maintain control. By the mid 1980s manufacturers were fitting ABS as standard on some model ranges, and it was a legal requirement on all new cars sold in Europe from 2004.

Another innovation that owes its inception, in part, to the aviation industry, the idea of airbags was first patented by two American dentists in 1919. However, by the early 1950s the race was on with both US and German inventors trying to apply the concept to cars. Early designs relied on mechanical systems and compressed air to inflate the airbag cushion in the event of an accident, but this proved too slow. The idea required the development of additional parts – such as a small explosive charge to inflate the bag and crash sensors – to really prove effective.

By the late 1960s, the first cars with airbags mounted in the steering wheel started to appear in the US but were seen as an alternative to seatbelts, rather than a supplemental restraint. It took the introduction of an airbag on the 1981 Mercedes S-Class, where it worked with seatbelt tensioners to project occupants, to define how they should be best employed. Today, items like curtain airbags are common and modern cars incorporate as many as ten separate units into the cabin.

Once upon a time, tyres were made by placing layers of nylon cord diagonally across each other, at 45 degrees, before the whole structure was given a toughened rubber coat. This process was called cross-ply, and it’s how tyres had been made since their introduction in the late 1800s. It proved tough and more forgiving of punctures, but it was not without issue.

Michelin developed the Radial design in 1948 and bought about a revolution (ahem) in tyre technology. This new type of tyre used stronger steel cords, set at 90 degrees, as well as radial steel belts to support the tread. The result was lighter, more economical, lasted longer and produced less cabin noise, but its major claim is that it didn’t overheat at higher speeds. This meant it was much safer than the cross-ply design and gave the driver much more control. The benefits of this new tyre were quickly embraced and effectively allowed the development of the high-performance vehicles we enjoy today. 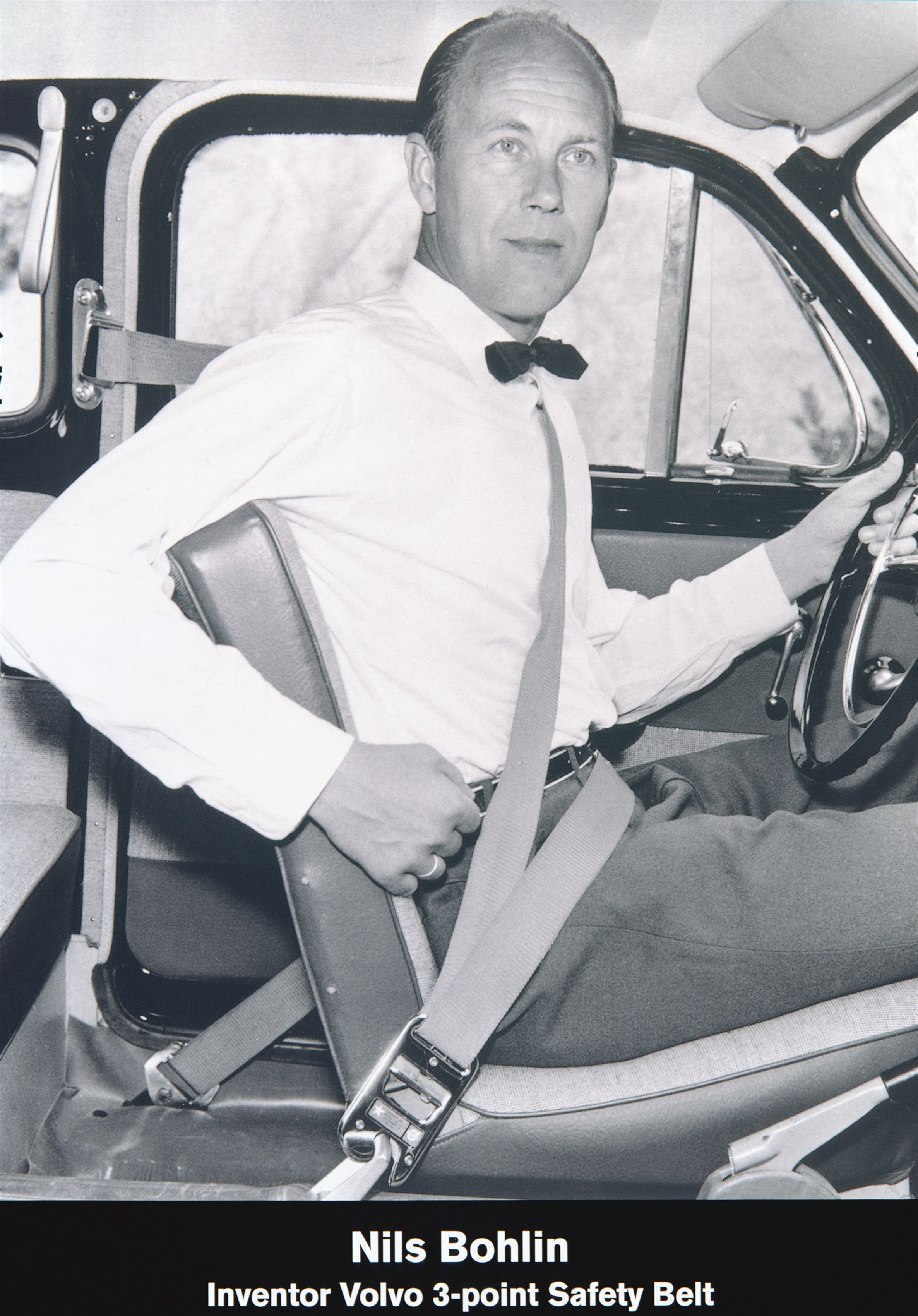 Volvo Cars engineer Nils Bohlin deserves our unwavering gratitude. Tasked with improving the concept of seat belts in cars, his work led to the introduction of the first three-point seat belt as standard – in the 1959 Volvo 122. Bohlin had spent time with Saab AB, developing ejector seats for planes, so understood the value of ensuring the upper torso and the lower part of the body are held securely in place.

Volvo declared its seat belt an open patent, allowing any car manufacturer to use the design for free, and the basic principle largely remains unchanged to this day. It’s hard to know for sure, but it’s been estimated that the seatbelt as we know it has saved over 1 million lives and reduced countless injuries during accidents.

Did you know the history behind these inventions?