Should we use today’s safety devices on our classics?

When Volvo introduced the three-point seat belt in 1959 it changed road safety forever. In an era where drivers and passengers were wearing a two-point waist restraint that sometimes did more harm than good, Volvo did something different. It developed a safety device and decided that saving lives was more important than the bottom-line and profits, so offered it patent-free for all car manufacturers.

As many know, there’s a community of cars on UK roads that don’t have this technology.

We look at the facts, figures and discussion points around whether we should use today’s safety devices on our classic cars.

When modern-day cars carry more safety devices than ever before, how do classic cars compare?

Not very well, but that’s to be expected to some extent.

A test by industry body Thatcham Research in 2017 compared a modern-day crash test with a 1997 Rover Metro 100 and a 2015 Honda Jazz. While the Jazz’s occupants would’ve walked away from a 40mph crash, those in the Metro might not have been as lucky. With the ‘safety cell’ not performing the way that the modern city car did, it showed the value of modern-day testing and safety standards.

“Wherever you were sitting in the Rover 100 it was bad news. In a head-on crash at 40mph, you definitely do not walk away,” said Thatcham Research expert Matthew Avery.

Not good news for occupants of late-Nineties city cars and indeed the same can be said for many other classics. This leads us to ask some questions about adapting classic cars to be safer on the roads, not only for the occupants but also other road users.

Retro-fitting isn’t a new thing, it’s actually been around for a while. Typically used in the context of audio systems, where owners want to improve their car’s stereo sounds using modern-day technology, we ask: why isn’t it as common to upgrade things that will save lives, rather than just sounding good?

Well, some companies in the UK and beyond have tapped into this market already. While not all are as generous as Volvo with giving away their safety gear for free, it doesn’t have to cost the earth. However, there are a few barriers that we should talk about, other than cost, before we look at modifying our classic cars.

Changing a classic car’s originality in this context shouldn’t affect a car’s MoT or testing. Of course, MoTs are only a requirement if your car’s younger than 40 years old. However, if you’re adding and modifying the car to include things like safety devices (such as retrofitting seat belts at home) then your MoT tester shouldn’t frown or turn you away.

Then there’s whether classic car owners want to change the way that their car drives and feels in order to make their vehicle safer. Much like adding seat belts to your classic, it’s an ongoing debate with enthusiasts at club meets, on members’ forums and on Footman James’ website. It comes down to personal preference over the value of safety. While it’s true that owners of classic vehicles typically use their car less than other motorists, evidence points to the fact that you face a risk even if you do one mile rather than 10,000 a year.

Finally, the cost. For major changes such as brakes and adapting your car to fit them, then there’s a significant investment in terms of time taken to adapt your car plus parts used.

We recently ran a poll across our social media channels to find whether people thought you should retro-fit modern safety devices to classic vehicles. The results were very close, see below. 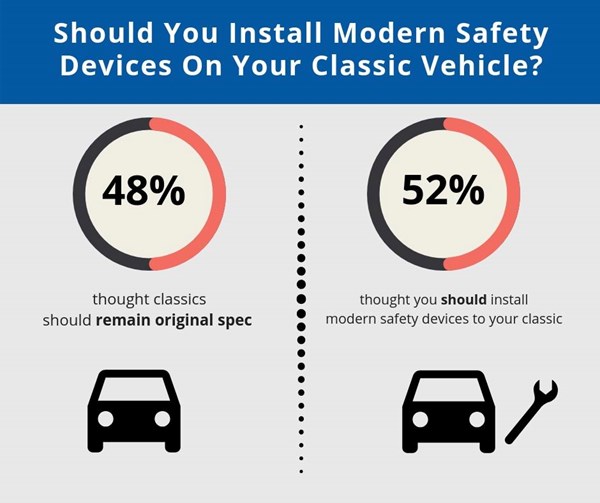 Have you fitted a safety device to your classic car recently? Or maybe you bought a car with upgraded parts to keep you safer? Let us know in the comments with your experiences and thoughts on whether we should use today’s safety devices on our classics.

I have 1971 VW Bay window camper . On the Brakes I only use original ATE parts and good quality tyres Michelin tyres. Cheep tyres are a false economy, they don't grip as well and don't last Having worked in the motor trade all my life and driven cars with awful cheep tyres on them i know the difference changing them can make . we brought a Polo 1.2 for my son and it had some very cheep and nasty tyres on it, It was like steering a shopping trolley , I changed them for Michelin's ,different car instantly quarter, drives perfectly and stops so much quicker . Back to my camper. In 1971 they didn't fit rear seat belts and having two very young boy's then I made a cross bar, had it all welded up and under seat bracket's . I gave my eldest son the demon tweeks cataloguer and told him to choose two full harnesses as they have to meet very high standards for racing . They still use them now and they are 21 and 16 years old now. I don't drive the camper like a modern vehicle nor do i hold up the traffic i always leave extra space and good stopping distance although it does stop very well. As for airbag's abs etc i think if people were to just take a bit more time slow down a bit and learn a bit about there vehicle ( how to change a tyre for a start) we wouldn't need all this stuff in the first place .

I have a 1992 Mercedes 190e 1.8 Auto which I have owned for 7 years and has only covered 119,000 miles with full service history. I am given to understand that these rarely seen classics were considered to be over engineered and it has many features that some classics of this era lacked. It still drives like new and over the period of time since it came into my possession, I have spent just under £1000.00 on servicing and repairs and still gives me pleasure when driving it.

I absolutely believe in using modern servicing ancillaries in my old classic. Why pay premium prices for cruddy straight 30 oil ( i.e Gulf Classic SAE30 at almost £50 for 5 litres!) when you can use a modern Semi 10/40 at under half the price! Don't try and kid me that an old engine does not benefit from modern technology. Apart from that I see no point in spending £££££'s on a car that is only used in fine weather, never exceeds 60 mph.

I have a 67 MGB GT Rally Car. Many MG club owners have fitted 5-speed boxes and some have modern K-series engines. these make the cars more driveable in modern conditions BUT for competing in Historic Rallies only period mods can be used. I have a roll-cage and harness belts but brakes are only mildly improved.

Safety modifications are a must. My TR has 3 point seat belts, roll bar, upgraded brakes and servo, larger radial tyres, modern seats with headrests, decent lights to see and be seen and many other small things. The whole package would not be noticed by a non purist and makes the car much safer and pleasant to drive. This is what classic cars are for, to be driven and enjoyed.

I have a 66 Mustang convertible. I now have discs all round with servo assistance, 3 point belts for the driver and front passenger and power assisted steering. All make the car more reassuring and more relaxing to drive - I do not need the legs of Sir Chris Hoy to stop or the arms of Garth to steer!!! The car came with a hydraulic hand brake spliced into the brake hydraulics - no redundancy at all! It now has a mechanical handbrake between the front seats - the under-dash emergency brake was missing, so this seemed a sensible solution for a manual transmission car.