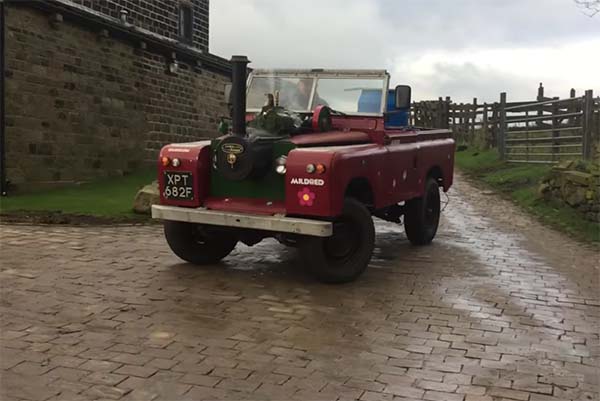 Amid the rising costs of diesel and petrol, one eccentric engineer is turning to steam to bring new life to an old Land Rover.

The fantastical coal-powered machine is a labour of love for Frank Rothwell, a 67-year-old from Oldham.

After appearing on Bear Grylls survival show, The Island, Frank was looking for a new project to keep himself entertained.

“I'd already built a 1910 steam wagon and got a real kick out of that, so just thought, 'what else can I do?',” he said. “I wanted it to be something unique and recognisable, something no one else had ever done.”

Frank named the 50-year-old Land Rover Mildred, as a nod to all the mildew that covered the 4x4 when he first discovered it being sold by a manufacturing company.

Now equipped with a custom-built 2.25-litre petrol engine fashioned from a Series IIA, the classic uses a coal-fired boiler to heat up water and turn it into steam, powering its engine.

It took approximately 400 hours to complete the project, setting Frank back around £24,000.

But the expense doesn’t stop there – the engine burns through coal at a rate of around 45kg an hour.

The man from Greater Manchester has now increased the pressure to 200psi and expects the vehicle to reach maximum speeds of 12 or 15mph.

He added: “If I’m going from here to work, I don’t do much more than that anyway. There might be a couple of bits where I might hit 25mph but that’s it, so… I’ll be able to go to work in it in the summer.”