The Beast Is Back 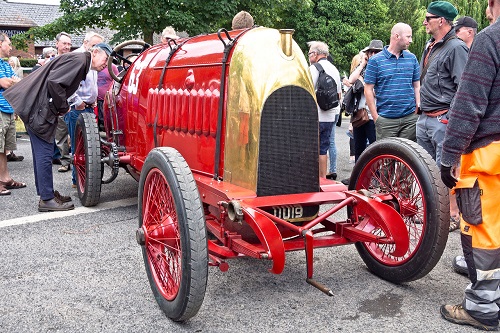 The infamous Beast of Turin will return to race up the hill at the 2018 Chateau Impney Hill Climb.

It last joined us in 2016 and we are extremely excited to see it roar up the hill next year! Once hailed as one of the fastest cars in the world, this feat of machinery is undeniably a must-see for 2018!

“The Beast of Turin” is an affectionate nickname given to the 1911 Fiat S76 – a vehicle that was created to break a land-speed record and rival the 1909 Blitzen Benz. The Beast is capable of 300 HP and features an impressive 28.5 litre inline 4-cylinder engine! However, that’s not all, the vehicle also spits fire, as the exhausts are unmuffled.

Whilst two were initially built, only one has survived. Now it’s your chance to see it in action.

Check out this video that takes you through the journey of restoration with driver Duncan Pittaway. Over a decade was spent restoring the Fiat S76.