Exclusively on footmanjames.co.uk we’re previewing tonight’s episodes of the brand-new show, The Car Years, on ITV4 at 8pm and 8.30pm BST. It’s the final two episodes in the series, presented by Vicki Butler-Henderson and Alex Riley, and it looks like they’ve saved the best for last.

Series one has so far divided opinion on- and offline, with the Footman James social media polls on who should be the winner. For those who are just tuning in, you can catch up on The Car Years on ITV Player. We promise this preview won’t have any spoiler alerts…

The premise of The Car Years is simple – the two presenters each pick a car they think is the best representation of a specific era of vehicle production or a pioneer in an area of motoring. It’s then up to a team of judges that work in the automotive industry to chip in with history and stats on each, and then collectively choose a winner. 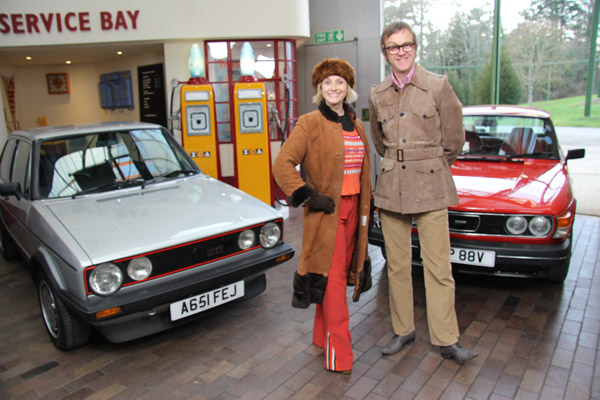 Episode 5, the first of the double-bill, will be live on IT4 tonight from 8pm BST. It looks at two sports cars launched in 1996 that went on to save their manufacturers from going bankrupt. Alex Riley champions the lightweight Lotus Elise, a car that rescued Lotus both from a financial point of view but also as a brand, to revive its name as an expert in engineering. With its pioneering fibreglass body shell atop its bonded extruded aluminium chassis, it was a lesson in lightweight and benchmark ride and handling.

Also launched at the same time was the Porsche Boxster. Today, the Porsche brand is one of the most well-known, respected and profitable in the industry, but in 1996 the German sports car manufacturer was in trouble financially. The Boxster did save Porsche but also made a name on its own. From its design to performance and production, Vicki explains why it’s her winner. It’s a tricky decision for the judging team, made up of author, racing and stunt driver Ben Collins, former F1 driver and broadcaster Karun Chandhok and respected journalist and presenter Erin Baker.

Don’t adjust your screens though as the final episode of the season airs straight afterwards on ITV4 at 8.30pm BST. Episode 6 will see the presenters battle for what they think is the best performance car to be released in 1976. Vicki pips a VW Golf GTi against Alex’s choice of a Saab 99 Turbo. The Golf GTi ‘Mk1’ was the first small family car VW produced and notable because it was the first VW to shift from rear-wheel-drive and rear-mounted air-cooled engines to having everything in the front and water-cooled engines. There’s much more nerdery where that comes from as the judging panel also explain what makes the VW Golf GTi and Saab 99 Turbo so iconic.

The Saab, a little like the VW, was produced as a brand-new car for the marque and to reach a new segment. From VW shifting the way it engineered and powered the Golf, Saab’s executives designed the 99 Turbo to be a larger version of the 96 and was also the start of the brand going turbo-powered. A tough decision, as both are pioneering, we’ll see the judges mull over the options for the winner. The final episode will be judged by former F1 driver and presenter Tiff Needell, Erin Baker and Ben Collins.

Follow along with us live using #TheCarYears and tell us who your money’s on in the comments section below. Do you think Alex’s Lotus Elise will be the ultimate ‘heavyweight’ in the fight against Vicki’s Porsche Boxster? What about the Saab 99 Turbo up against the famous VW Golf GTi?