It’s 58 since Carroll Shelby first fitted a Ford V8 engine to the AC Ace roadster to create a legendary sports car, but AC Cars is now set to deliver an altogether different type of snake. Making good on recent news, the company has confirmed that production has begun for a new limited run of the iconic AC Cobra, but this time with an electric powertrain.

Purists may recoil at the idea of the AC Cobra Series 1 electric however, in truth, the AC Cobra is a car of many powertrains, including the Ford V8 courtesy of Carroll Shelby. So, from a historic perspective, you could argue that this is merely the latest incarnation of a model which has evolved constantly since the AC Ace was introduced in 1953.

Initially sold with a 2000cc straight six engine of AC’s own design, this small roadster enjoyed reasonable performance from the 100bhp engine, although it was by no means considered fast. From 1956, buyers were able to specify the rather more sporting two-litre Bristol engine. Although this engine had the same cubic capacity as the AC unit, with its three downdraft carburettors, free-revving nature and over 120bhp, the AC-Bristol as it became known suddenly developed a competitive edge.

By 1961 Bristol Cars were phasing out their six cylinder engines, which would have created a problem for AC Cars, had Ken Rudd of Ruddspeed fame not stepped into the breach with a highly tuned version of the 2600cc Ford Zephyr engine. A more compact power plant than the Bristol engine, it gave great performance thanks to its 130bhp, but it too was short lived. 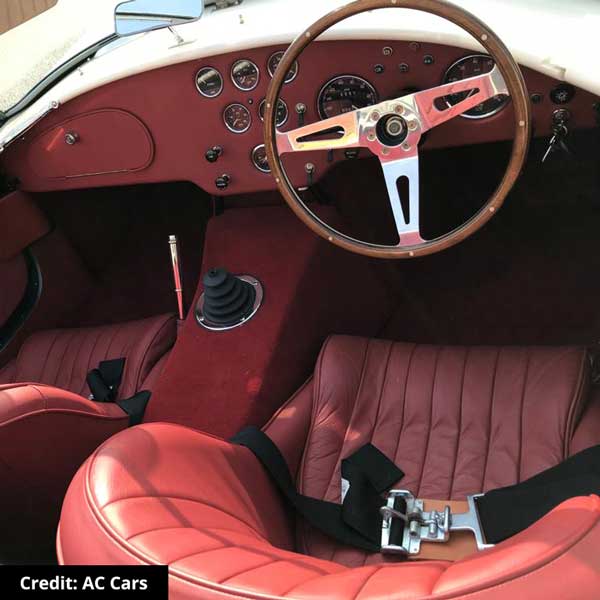 By 1962, Carroll Shelby had experimented with fitting a Ford V8 into the Ace in a bid to out-perform the Chevrolet Corvette, and even with the smallest engine available from Ford, the small block 4300cc V8, the performance was so revolutionary that the six cylinder engines became almost immediately redundant. Many variations followed this early ‘289’ Cobra, including the later “big block” 390 and 427 Cobras with their wider bodies, built to accommodate the larger seven-litre engines and wider tyres.

With the marque and model both living on, the Cobra later enjoyed supercharged V8 power in the 1990s, and at one point was even developed to accommodate the twin turbo V8 engine from the Lotus Esprit – although only two of these vehicles were ever built.

Ultimately, the 2020 AC Cobra Series 1 electric is faithful to the AC Cobra lineage but with the latest in modern powertrains. This is not to say that AC Cars isn’t continuing with its potent petrol powered cars, and the company has recently released details of the 580bhp AC Cobra 378 Superblower MkIV.

With a 0-62mph time of 6.7secs and a top speed of 120mph the new car will likely be akin to the early generations of the AC, rather than some of its outlandish V8 ancestors. However, with the near instant torque that electric motors are known for, and a range of 150 zero-emission miles between charges, it’s undeniably an altogether different animal.

Is this the ultimate reincarnation of a sports car for the next era of motoring enthusiast? Let us know your thoughts in the comments below.