The Return of The Bugatti Baby II for Kids

The best-selling vehicle of the 1990s was not a VW Golf, or even the Ford Escort, but the Little Tikes ‘Cozy Coupe’ which sold over 500,000 units a year for ten years. Small cars are big business it seems and, while the popularity of the child’s pedal car is nothing new, 2020 has seen the revival of two of the most iconic small cars of the last century.

A world apart from the simplicity of the red and yellow plastic Cozy Coupe, which is propelled ‘Flintstones-style’ by foot, perhaps the best known and well-loved British pedal car was the Austin J40. Produced from 1949 onwards in South Wales, at the specially constructed Austin Junior Car Factory, the pedal cars were made as a charitable venture to get disabled coal miners into work following injury.

These miniature cars were made from the scrap metal taken from the Austin factory, and assembled in a manner not dissimilar to the full-sized cars they so closely resembled. With electric lights and a horn, as well as real Dunlop tyres and a choice of either leather of cloth seats, these small pedal cars were not cheap - although they were popular. Despite the high price tag which would be equal to £1200 today, over 32,000 were made over a 22 year period and many survive to this day, either as fairground attractions or latterly, as the steed of choice at the “Settrington Cup” at the Goodwood Revival. 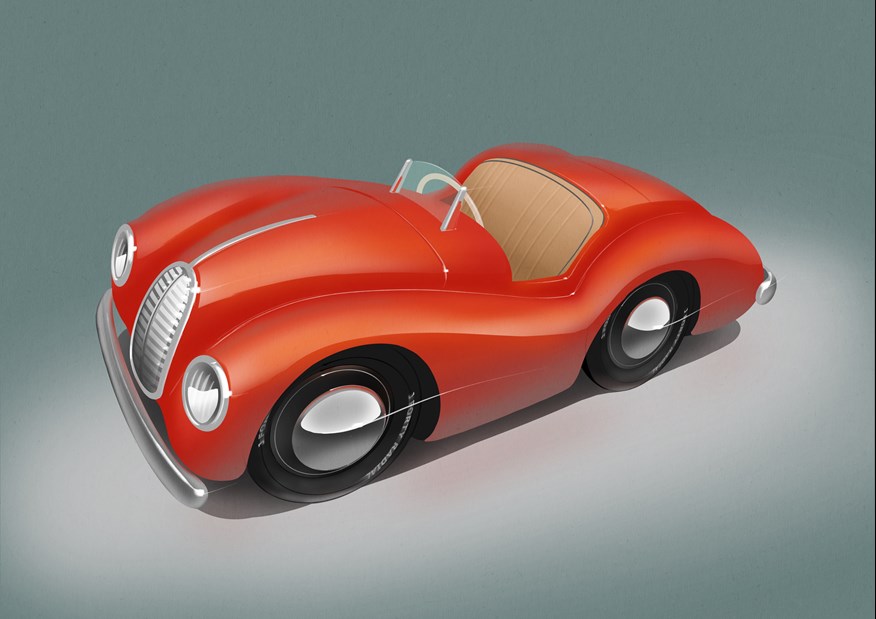 In 2020, the J40 pedal car was revived by the historic engineering firm Burlen, who have recently announced their intention to restart production of these small but sturdy pedal cars, as well as adding new models and updated designs to the range to appeal more to the child of today.

For the children lucky enough to be too posh to pedal, the Little Car Company has just launched the answer. The Bugatti Baby II is a faithful recreation of the original car that was first created in 1926, when Ettore Bugatti decided to build a miniature Type 35 racing car for his youngest son’s fourth birthday. Bugatti customers at the Molsheim factory soon saw this miniature car being enjoyed by the young Roland Bugatti, and demand for the car became too great to ignore. A further 500 were made at the time, finding their way into the hands of the world’s wealthiest children and, with original examples now fetching upwards of six figures at auction, they remain well out of reach for all but a few.

Fortunately, with a fractional increase in size to allow for children and adults alike, the Bugatti Baby II has grown up a little in size and power, without losing the charm of the original.  Now with features such as a limited slip differential and hydraulic brakes, the Baby II can be limited to 12 mph, or unleashed to realise its full potential of 42 mph - if the driver can handle it. If the elegant form of a Bugatti Type 35 is less appealing than the chance to play James Bond, then a miniature Aston Martin DB5 Vantage is also in the pipeline for release later this year.

Did you have an original Austin J40 pedal car as a child, or have you seen a Bugatti Baby in a museum? Let us know your memories in the comments below.