Paul & Marion: The Story of 'Betty Lou' The Pink Chevrolet!

Now retired, Paul and Marion have been on quite the adventure with their beloved American van, Betty Lou. We first spotted Betty Lou at our Coffee & Chrome meets this summer. Betty really stood out and drew lots of attention due to her bright pink colouring. So, we had to speak to Paul to find out more about her.

“Our love of classics actually started accidentally. We are both retired now but at the start of our driving days as teenagers you had to get on the road as cheaply as possible. So, we would acquire a cheap old car with the weekends being used for repair and visiting the scrap yards. When that vehicle had reached its end, then you’d do the process all over again until a change in life forced you to get a new or newer one.”

“Some of the cars that have passed through our lives are; MK V Jaguar, MK IX Jaguar (My favourite car ever), MK I Cortina GT, Capri’s, Gilbern Invader, Landrover Series 2, Morris 1000 Traveller, Mercedes and WRX Impreza. We can only dream and wish we had them now!”

But eventually, Paul and Marion attended some American car shows with their friends and this inspired them to get their own American vehicle. “We thought we could have an American truck which would give us the vehicle for American car shows and also use it to carry our bike to bike shows, best of both worlds!”

Finally in 2013, they searched the web and came across a van, a 1949 Chevrolet 3100. “It was a van and not a truck but the paint job on the van made us decide that it had to be ours.” says Paul. “I phoned the seller and after receiving many photos of the van from all angles, we took the plunge and bought it, had it shipped to the UK and I remember when we first saw it after coming out of the container, we thought… WHAT HAVE WE DONE!” 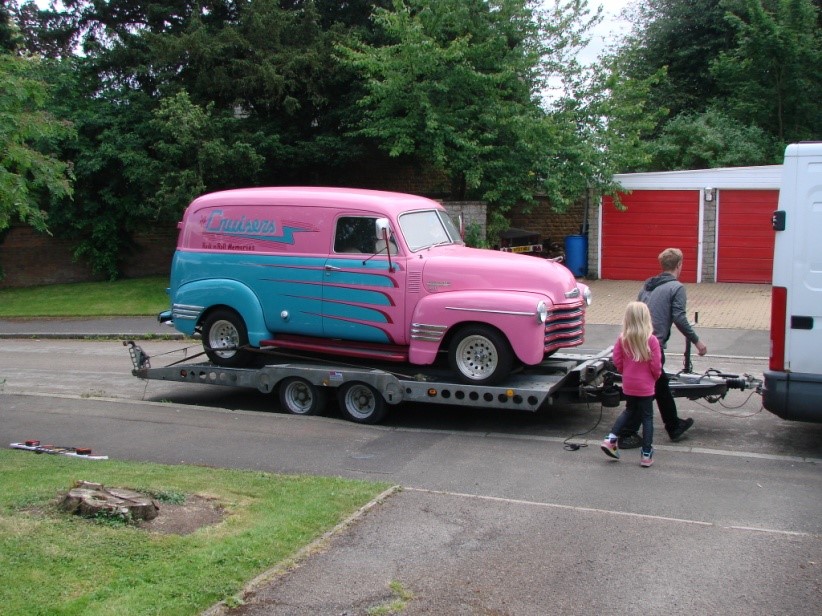 “We got it home and checked it out to see what we had to do to make it drivable. We wanted to spend the time to make the van suit our purpose as most of the parts were tired and worn but the paint was still in good condition. I did some of the work but outsourced first for replacement of the rear suspension and re-upholstery. Then it was back home and into the back garden to sit on the back lawn for two to three years while I attended to the required jobs.”

“Meanwhile, we had found a letter in the glove box from the man who had painted the van in its distinct colours. I phoned him in the USA and told him that we had a van we thought he had painted. He remembered it and gave us lots of history which included telling us that it belonged to the drummer of a rock and roll band called “The Cruisers” in Louisville, Kentucky. He also said that the drummer, Dixie, had married an English girl and now lives in Liverpool and told me how to contact him. We did and he was amazed that the van was still around and had followed him to the UK. We said we would bring the van to Liverpool to show him as soon as it was ready!” 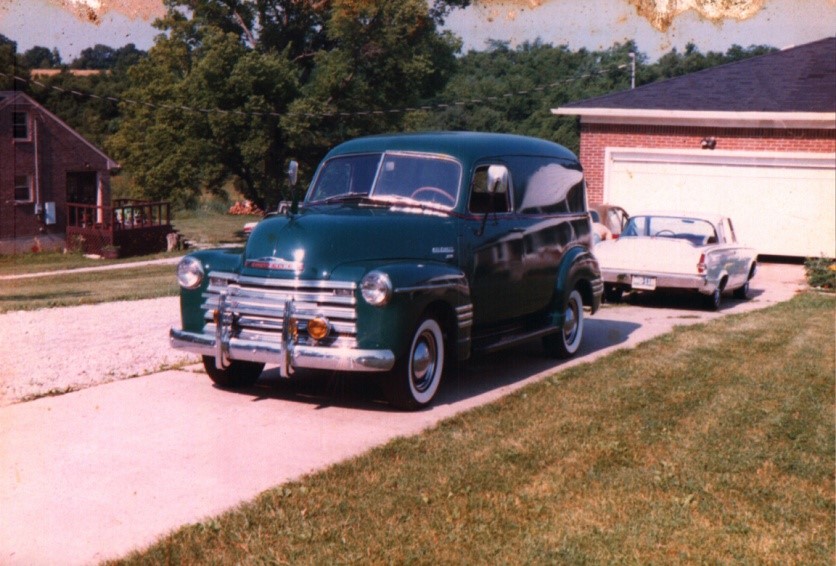 “Over the following years whilst restoring the van, Dixie gave us lots of history about the van. He told us why it was painted the way it was, originally used just to carry his drums, the group decided it would be fun to include the van when they played at the Kentucky Derby, a major horse racing event and the Derby colours were pink, teal and red. So, Dixie got his friend Freddy to design and paint the van in those colours, then they would drive it on stage! It was then used as a promotion vehicle at all their gigs, and he called it “Betty Lou” so from that moment on that was her name to us as well.” 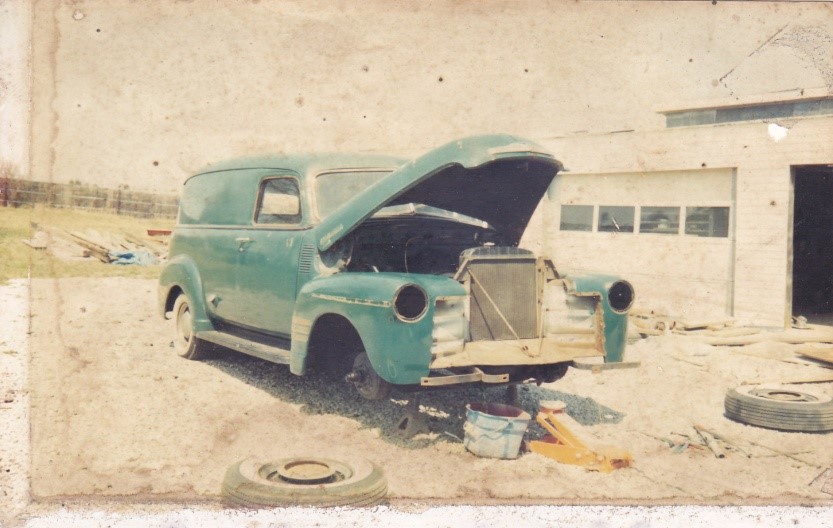 Ready for painting at Freddy's Paint Shop in 1992

“We removed the painted wooden floorboards and varnished them, rewired the van completely, fitted new gauges, lights, overhauled the gearbox, new brake pipes, brake servo, discs and rear brake drums, re-core the radiator, improved the cooling circuit, new exhaust headers, carburettor and manifold. We also added a new front bumper, acquired a 50s steering wheel, added more chrome for more sparkle, gave her a good clean and polish of the paintwork. We were ready and to prove it, it passed its MOT!” 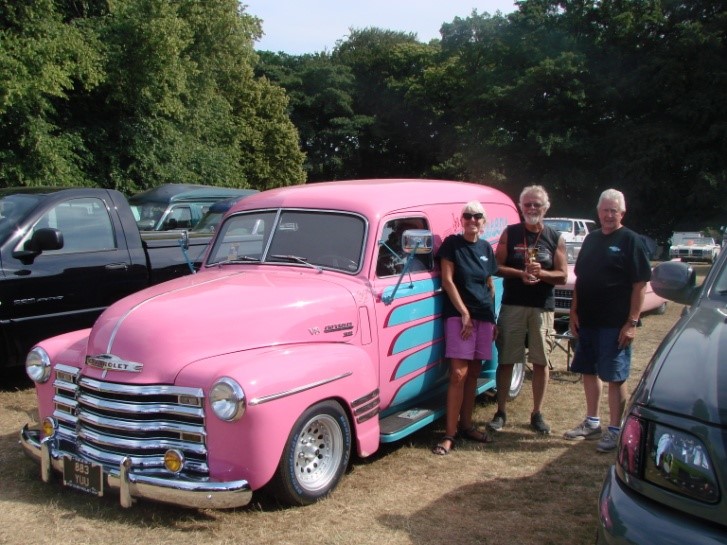 Left to right: Marion, Dixie and Paul at the Manchester show

“One of our first shows was in Manchester, so we took the opportunity to call in and see Dixie and show him the van. He was so overjoyed and emotional to see the van as it was his pride and joy and when he last saw it in 1998, he and Freddy had driven down to Florida and handed the keys over to someone else. To top the day off, he came to the show with us, where we won a trophy for best van in show!”

Thank you so much to Paul and Marion for their time and sharing with us the tales of Betty Lou! If you would like to have your story featured by us, please email news.views@footmanjames.co.uk