One of motorsport’s most successful icons and the darling of the British public, the Mini Cooper would have never happened if the original car’s creator, Sir Alec Issigonis, had his way. Keen to ensure that his brainchild would remain the people’s champion, he was never a fan of the notion of building the Mini for competitive motorsport. Thankfully however, his friend, F1 and rally engineer, John Cooper was a persuasive man. In 1961, two years after launch, he gained clearance from the purse-clenching BMC (British Motor Corporation) management to build a new, go-faster version that would embark on a championship-hunting quest that would define the marque.

While Issigonis designed the Mini’s chassis set-up and innovative transverse engine layout to offer occupants and their luggage best use of space (an unrivalled 80% of the car’s footprint), Cooper saw only unbridled motorsport potential. With suspension that rebuffed traditional methods in favour of a firm, rubber-based system designed by Dr. Alex Moulton, the standard Mini offered phenomenal handling and more than adequate performance from the 848cc A-Series engine. Dynamically, the base car was a race engineer’s dream, albeit a pocket-sized one.

When launched in September 1961, 1,000 Mini Coopers were originally commissioned in order to meet Group 2 rally homologation rules. The road cars featured a tuned version of the A-Series, using a stroked crank to achieve 997cc and twin SU carburettors to help increase power from 34 to 55bhp. A close-ratio gearbox (mounted beneath the engine and utilising a common oil source, as per the original design) and disc brakes at the front, unusual for such a small vehicle, were further performance-focused enhancements. 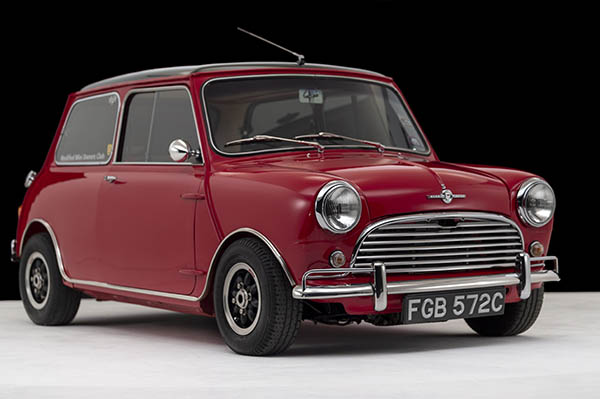 Early ’60s motorsport was very much about horsepower and rear-wheel drive. If there were any fears about the Cooper’s ability to compete, these doubts were soon crushed. Piloted by John Whitmore, who was also in his debut season, in 1961 the car won the British Saloon Car Championship at its first time of asking. Success was not limited to Tarmac: it also won the British Rally Championship in 1962, ’63 and ’70.

The Cooper’s introduction led to an incredible and well documented period of success as it continued to evolve through numerous updates and incarnations. The rostrum of championship and notable rally successes includes the infamous Monte Carlo Rally in ’64, ’65 and ’67, the arduous 1000 Lakes in ’65, ’66 and ’67; further British Saloon Car Championship triumphs in ’62. ’69, ’78 and ’79; British Rally Championship victories in ’62, ’63 and ’70; European Rally Championship wins in ’65 and ’66; and numerous championships globally over an almost two-decade period.

These were the days when motorsport and commercial success were intrinsically linked, and it can be no coincidence that in 1961 the Mini became the first British car to sell 1,000,000 units.

The Cooper’s success led to further updates, including a shorter stroke, larger bore 998cc A-Series engine and more powerful Cooper S versions that inspired the introduction of ‘big-car’ technology such as servo-assisted brakes. Engine capacity grew to 1071cc and, eventually, through to the famous 1275cc.

The Cooper boom inspired Mini production all over the world and it went on to be built thousands of miles from the Longbridge and Cowley plants synonymous with its production. Australia, Spain, Belgium, Italy, Malta, Portugal, South Africa, Uruguay, Malta, Venezuela and Yugoslavia (as it was then) all had plants producing domestic market Mini manifestations.

An icon of its time that’s still enjoyed by millions of enthusiasts the world over, there have been few more successful UK exports and none that encapsulate, quite so compactly, the idea of ‘Great Britishness’.