Newton’s Third Law says that for every action, there is an equal and opposite reaction. The statement means that in every movement, there’s a pair of forces acting on the two interacting objects. When a piston ascends on its induction stroke it creates a vacuum which then pulls in air to occupy the volume displaced. Simplistically, a 250 cc piston going up or down drags in an equivalent volume of air and fuel, but of course as we know air is hugely compressible. Get more air in along with the requisite fuel and you get a bigger bang; ultimately this is the basis of forced induction i.e. turbos or super chargers. Every motorcycle induction system is a compromise between available space, engine needs and noise emissions. Modern bikes breathe so much better simply because manufacturers have invested huge amounts of R&D on getting more air into their engines to achieve ever leaner burning to comply with the law.

Many of the classic eligible machines have rudimentary air intakes which can substantially compromise engine efficiency; not necessarily fuel consumption, but certainly in terms of power output and delivery. You fettle the porting, adjust compression ratios, revise carburettor jetting or fit a freer flowing exhaust, but all will have limited effects if the engine cannot draw in the necessary amount of air it needs for optimal running. Standalone pod filters are an option, ditto less restrictive air filters - or you can even run your bike with no air filtration at all. Each has it its own pros and cons. However, there’s another option which retains the basic original design of the bike along with efficient air filtration, whilst providing the engine with all the air it needs.

My Yamaha RD350 has had its jetting majorly revised to overcome flat spots, and the manifold issues attributable to modern petrol. The results have been remarkable; low and mid throttle response has improved but the top end felt as though there is more to come. Plug chops showed the engine to be running a little rich and the obvious route would have been to jet down accordingly. However, those that know better than me suggested the less obvious route of allowing the RD the air it needed, rather than restricting its supply of fuel. What follows is a pragmatic approach to providing the engine with the air it actually requires, rather than jetting down to the strictures of the inlet system. 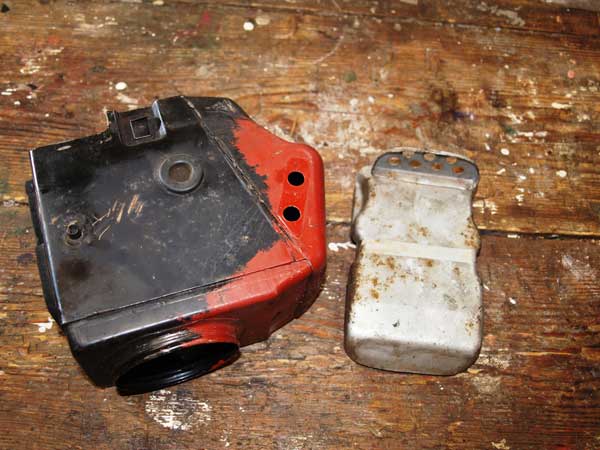 A spare RD air box and lid ready for experimentation. The two small holes at the front of the box indicate it’s from a 1975 B model running balancing pipes between carburettor and air box. 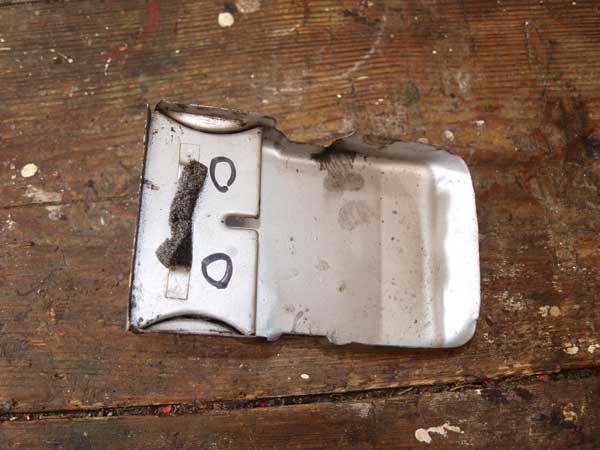 It’s not only the actual box that can impede air flow; the lid may also cause issues. The strengthening ridge on the left compromises the amount of air the engine can drag in. 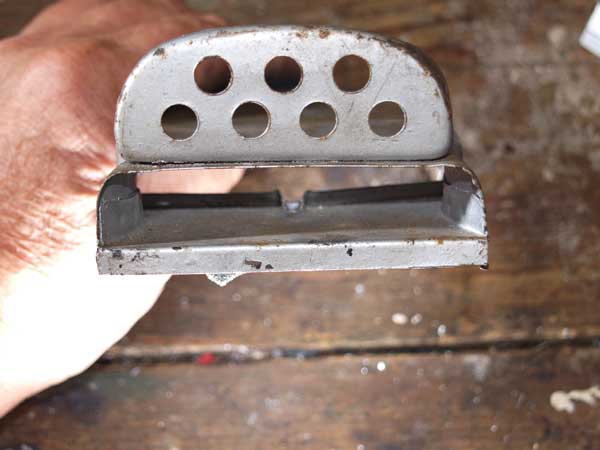 Seen from behind, it’s apparent just how much the aperture is effectively choked by the ridge. A quick session with the Dremel has the immediate intake area increased by 40%.

Now for the serious stuff. The existing mounting hole loses the access grommet and four more points of liberation are set out. It’s vital that the holes are sited directly over the location of the filter body. 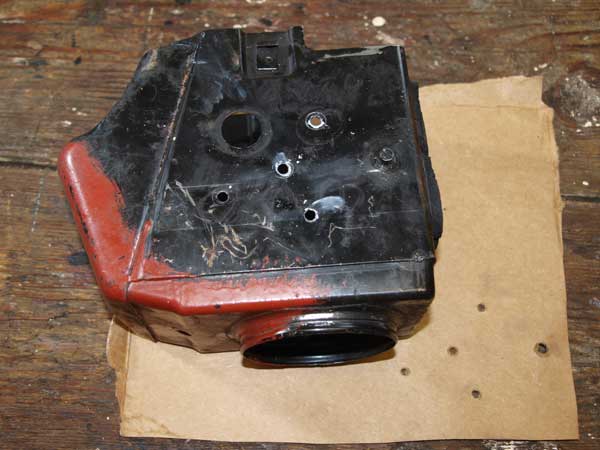 Four, approximately equidistant pilot holes are drilled ready for enlarging. I’ve made a cardboard template of their location so the sites can be accurately replicated on the other side of the air box.

The best way to cut large diameter holes in a thin metal panel is with a stepped or cone drill. These clever chaps can cut without excess pressure which can lead to deformation of the metal you’re trying to cut.

So far I’ve cut 20 mm holes and here I’m opening up one of the existing, previously grommeted access holes. The cone saw makes easy and safe work of the sheet steel. 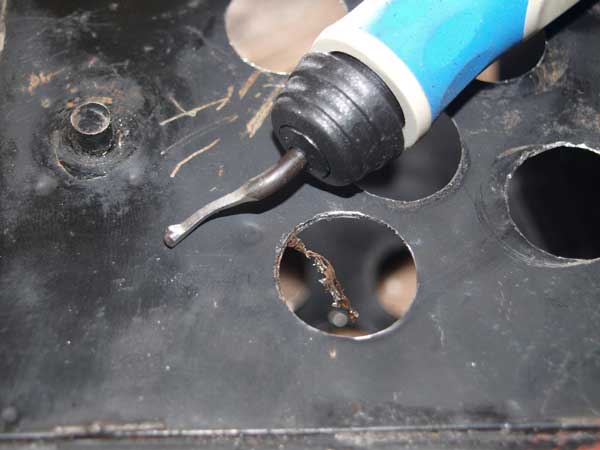 A deburring tool ensures no swarf will make it to the carbs or, more importantly, gets to slice my fingers! For less than a fiver these tools are a must-have if you work with sheet metal. 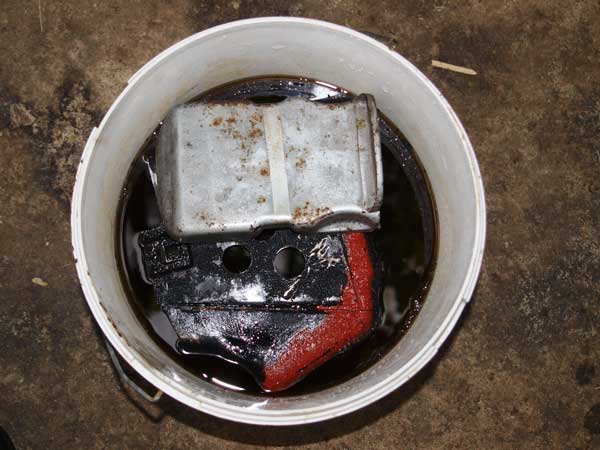 In the absence of a blast cabinet the air box and lid spend the weekend in a bucket of used paint thinners which lifts off most of the old paint. Post soaking and attacked with a variety of rotary tools, we’re back to bare metal ready for a session with the rattle cans to tidy everything up nicely. 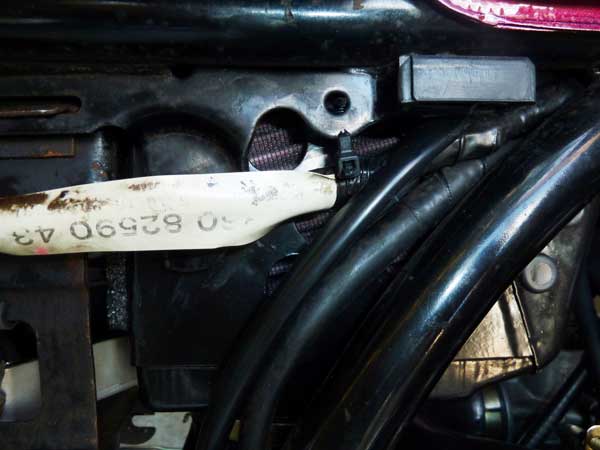 Painted and fitted with a K&N filter, the derestricted air box and lid are back in place inside the frame rails. Some of the holes are visible behind the wiring harness. The now redundant carb breather holes have been blocked with blind grommets.

OK - if pretty much any fool can punch holes in an air box the obvious question must be… what effect has it had? The answer is - simply astounding. It’s hard to credit, but the bike is just so much crisper throughout the entire rev range and, crucially, the top end is now so much freer and cleaner. Plug checks show the mixture is correct and bike now pulls even better. Perhaps best of all the bike still looks unmodified so it won’t offend the Originality Police!

When you grasp that our classic motorcycles were made at a time when the manufacturers were still learning their game you can appreciate that, forty years on, it’s entirely possible to improve on what’s there. OK, so drilling holes in air boxes may upset some folk but the RD was purchased with the prime intention of riding it not restoring it. Liberating the latent potential of an RD can’t be a bad thing surely? Leaning off the mixture rather than jetting down has liberated the aging hooligan within both bike and rider!

Knowing where to drill the holes in an air box is vitally important. They need to be around the periphery of the filter body and not in the initial induction areas at the front end of the air box or there’ll be carburation issues. Before setting to with the drills, it’s worth taking some time out to study how and where the air box draws in its air. How many holes is enough? A good question and there’s no simple answer, but in reality the engine will only inhale a finite amount of air for a given state of tune so arguably you cannot drill too many. However, the filter still needs to be adequately supported so you’ll need to check what you’re actually removing - the structure of the air box itself obviously shouldn’t be compromised. It’s best to drill at a size that can be easily corrected in case there are issues later. Check out the likes of eBay for blind grommets and grab a dozen of an appropriate size; they’re infinitely easier to insert than the metal you just removed!

Losing the air filter entirely is the most obvious way to maximise air flow but it comes at a cost; bore wear. If the engine inhales particles, they will find their way into the engine and gradually grind away at your engine. The old customising trick of fitting inlet trumpets or bell mouths to open carbs isn’t a guaranteed route to enhanced performance. Studies have shown that the pressure waves moving around an open carb hugely influence the shape and length of the air trumpet. There simply isn’t a one size fits all solution. Forums and owners clubs are valuable resources when it comes to areas such as pod or cone filters. Unquestionably, someone else will have been there before so learn from their mistakes, not your own. Many years ago a good friend was adamant he was going to use a certain brand of aftermarket filter on his bike come what may. It didn’t work and the bike fuelled appallingly. Two years on, he finally found the solution to his own enforced conundrum; he swapped out the expensive aftermarket, Japanese, flat slides for equally expensive Dell’Orto’s his mate happened to have on the shelf. These apparently worked perfectly with his chosen filters but it had all proved to be an expensive, time consuming, tail chasing exercise.