Footman James is pleased to announce that their sponsored show, The Car Years, will be hosted on ITV4.

Footman James revealed this information at the Practical Classics Classic Car and Restoration Show, held at the NEC in Birmingham.

ITV4 is the perfect choice to air The Car Years as it is regarded as a home for both sport and cult classics. Adding to their current line-up of classic car programmes including Fifth Gear, The Car Chasers, Isle of Man TT and highlights from the Goodwood Festival of Speed, The Car Years is in great company.

The new classic car show is presented by a dynamic duo - British racing driver and TV presenter, Vicki Butler-Henderson and TV and radio presenter, Alex Riley. Head on over to our Q&A with Alex Riley to find out more about the man himself, his motoring heroes and the first car he ever owned. 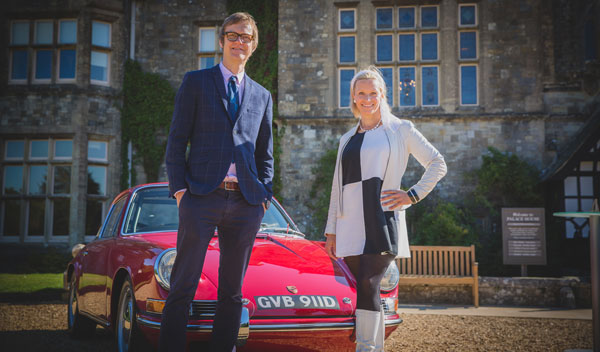 Each episode of the show will revolve around a significant year in automotive history, where Butler-Henderson and Riley will each select a classic car from that period and vie against each other to see their car crowned the star of that year. However, both Butler-Henderson and Riley will need to convince some of the most cultivated experts within the classic vehicle industry. The judges include, presenter and journalist Quentin Willson; ex-Top Gear and current The Grand Tour editor, Richard Porter; F1 star and F1 pundit, Karun Chandhok; and the Managing Director of Coys auction house, Chris Routledge. Each episode will be shot at the National Motor Museum at Beaulieu, also partners of Footman James.

The Car Year’s Producer, Jim Wiseman, stated: ‘Wiser Film are very proud of what we’ve managed to achieve producing this new and exciting car series. We feel privileged to have Footman James as our sponsor.’

Managing Director of Footman James, David Bond, commented: ‘it’s great that we can finally reveal the channel that The Car Years will be featured on. It is a completely new direction for us at Footman James to sponsor a TV show, as we have never done anything like this before and the fact that it is on ITV4 is all the more exciting. I want to thank Alex and Vicki for supporting the show as their comedic chemistry, mixed with their love for classic cars, really makes The Car Years a classic car TV show not to be missed.’

The last thing to be revealed will be the air date of The Car Years, but you can be the first to know by signing up to the Footman James newsletter or following Footman James on Facebook and Twitter.