Everything You Need to Know About the Practical Classics Restoration Show

March 22- March 25 was the sixth edition of the Practical Classics Classic Car and Restoration Show. Located at the UK’s number one venue for organisers, exhibitors and visitors, the NEC saw thousands of enthusiasts park up their vehicles and head to arguably one of the best restoration shows of the year.

The show brought together years of classic cars, restoration projects and classic car enthusiasts for an incredible line-up of classic vehicles, classic car clubs, exhibitors, along with some well-known faces in the industry.

From the truly scrumptious Chitty Chitty Bang Bang, to live interviews with VIP guests, the Practical Classics Classic Car and Restoration Show was a hub for everyone who loves classic cars and restoration projects.

Here is what went down at the show:

Every year, we have been part of the show and always look forward to welcoming people to our stand, whether that is to discuss classic car insurance or whether it is just for a classic car ‘chit chat’.

This year was no different as our Footman James stand was jam packed full of excitement with two very special guests joining us; British racing driver and television presenter, Vicki Butler-Henderson and TV/radio presenter, Alex Riley. 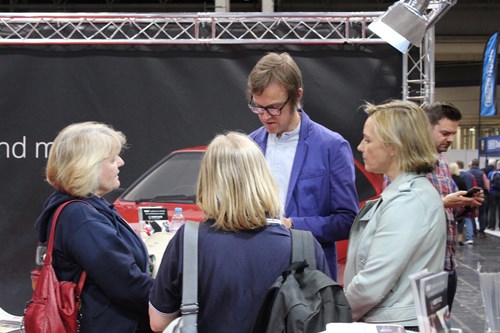 Riley and Butler-Henderson joined us on our stand after their appearance over on the Practical Classics Live Stage for the announcement of Footman James’ sponsored classic car TV show, The Car Years. We are pleased to announce that The Car Years will be aired on ITV 4!

Not only this, we teamed up with our affiliated club partner, the Morris Minor Owners Club, who kindly supplied a stunning 1949 Series MM Morris Minor Tourer. 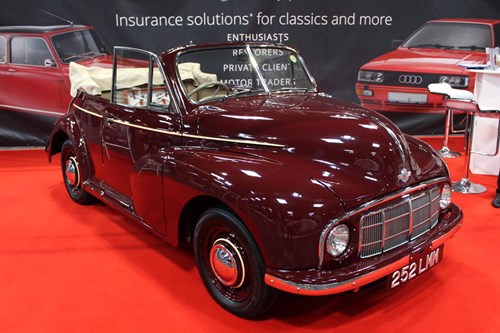 Owned by the Morris Minor Owners Club’s club secretary, Ray Newell, the beautiful maroon Morris Minor was restored over a 25-year period. The only changes to the classic car from its original specification were safety related, with the addition of seat belts and rear flashing indicators.

In 1948, at the Earls Court Motor Show in London, the Morris Minor Tourer was the first series of Morris Minor launched. The original cars were powered by a 918cc valve engine that reached speeds of 62mph; however, this Morris Minor Tourer had period modification fitted which allowed the classic an increased acceleration of 10mph.

We were grateful that Ray allowed us to have such a remarkable example of a Morris Minor Tourer on our stand over the weekend, it certainly got the attention that it deserved.

We would also like to say a special thanks to Malcolm who is also a member of the Morris Minor Owners Club, who made this little classic ‘spick and span’ ready for the show. 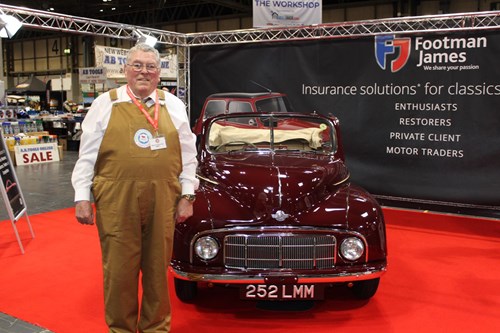 On March 23rd, classic car clubs from across the country came together for a night of champagne popping and awards. Now in its fourth year, the National Car Club Awards brings some of the most hard-working clubs to the show to honour their dedication to the classic car industry.

There were 19 awards up for grabs, with Footman James sponsoring the National Car Club Unsung Hero of the Year award and the Best Club Display at Show: Large Stand. It is with great pleasure to announce that Graham Le Lay of the Jersey Old Motor Club walked away with the Unsung Hero of the Year award and our good friends at MX-5 Owners Club who took Best Club Display (large stand).

A truly scrumptious vehicle also made its way to the Practical Classics Classic Car and Restoration Show; the GEN II replica of the car originally seen in the hit movie Chitty Chitty Bang Bang. 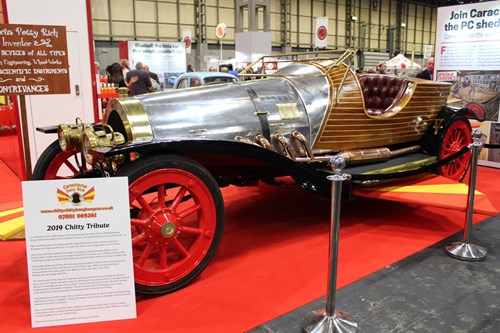 The builder of the car, Richard Skinner used original studio drawings and body patterns from the builder of the wooden bodies, which made the GEN II an exact match to that which was seen in the film. Skinner commented, ‘I’ve even gone as far as locating the rare Afrormosia wood used on the original cars… plus the layers in between the planks are very rare and very expensive, but the project has to be correct in every way.’

We can certainly say that he did an amazing job!

Some of the greatest players of hide and seek were found in the shows barn find. Visitors got to see the UK’s biggest gathering of amazing barn finds on display at the Practical Classics Restoration Show, including this superb example of a 1970 Ford Mustang Mach One. 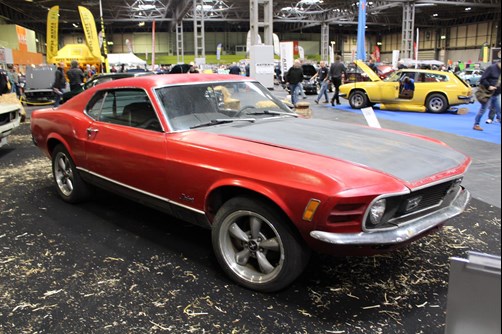 RESTORER OF THE YEAR

The grand finale of the Practical Classics Restorer of the Year took place over the weekend. After weeks of classic car enthusiasts voting from across the country, the top six finalists were on display in all their glory at the show.

The six finalists were:

In the 12 months leading up to the classic car show, Practical Classics editor, Danny Hopkins and his team have been on the hunt for some of the best stories behind some of the UK’s best restoration projects.

But, in the end there can only be one winner and that is the… 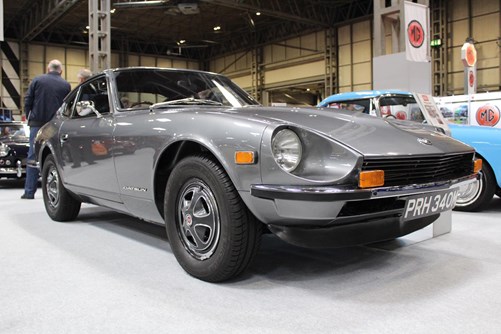 Congratulations to Paul Henley who stripped and restored this beautiful classic car and transformed it into an outstanding example for others to follow in his footsteps. 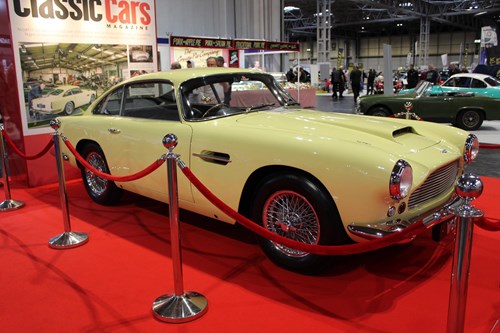 In 2006, this Aston Martin started its journey of restoration after the classic had dropped a valve and developed a misfire in 1982. 25 years later, Bennington uncovered the classic car and was determined to see the Aston restored to its former glory, especially after finding out that the model could be one of the earliest surviving DB4s in the world.

Bennington promised the Aston’s former owner a drive once the restoration was complete, unfortunately Nevil Albert Rees (former owner) passed away just before the classic car was restored. But in true gentlemen style, Bennington is honouring his promise to never sell the Aston again.

Classic Car Auctions returned with a blast as the auction brought along their biggest sale of the year. 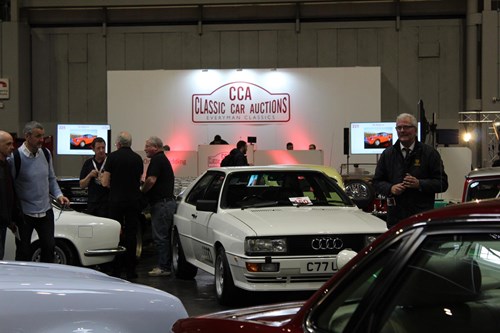 Over 190 classics were on display ready to take on their next adventure. The sale saw a wide variety of ‘everyman classics’ on display from a Model Y van to a 1948 Bentley MKV1 Mulliner Lightweight Aluminium Saloon.

Gary Dunne from Classic Car Auctions stated, ‘we are very pleased with the wide selection of cars we have to offer at our auction. In keeping with our aim of providing everyman classics, there’s something to suit all classic car enthusiasts.’

Over on the Practical Classics Live Stage with Discovery, a Triumph TR6 was undergoing restoration in front of a live audience. 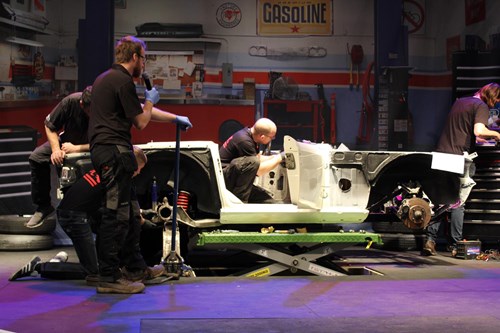 The task for the weekend was to bring Practical Classics’ Production Editor, Matt George’s dreams alive as the teams took on the test to see whether they could restore a withered TR6 ready for Matt’s wedding later this year.

Found in Ohio, the Triumph TR6 was left abandoned in a scrapyard, but luckily, the right eyes set sight on the classic and it was imported back into the UK, with work being carried out on the Triumph over the last two years in the Practical Classics Workshop.

A job was well done as Matt's TR6 started on stage. All that’s left to do now is get him and his bride to be to the church on time.

One of the most loved classic car charities came back to Birmingham in order to help raise more funds for UK children’s charities. 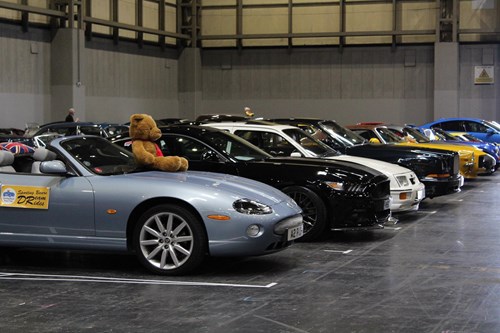 Formed in 1989, the charity has raised over £2million for respected charities in Britain, and over the weekend Sporting Bears aimed to add more to this total by offering visitors a ride of a lifetime in some of the most exotic cars in the motoring industry, including the supreme Lamborghini Huracan Performante and the latest Alpine A110. For a small fee, donators could enjoy a ten-mile passenger ride around the NEC, all for a good cause.

Helping the charity along the way was the popular National Traction Engine Trust who supported the cause with their traction engines. 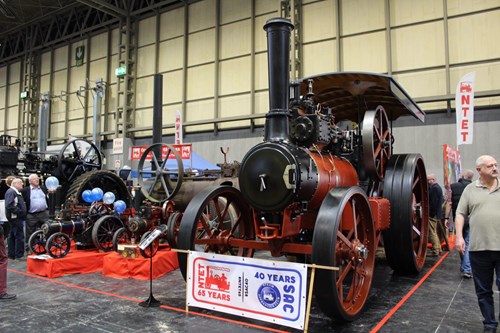 The trust represents owners and enthusiasts alike and is regarded as the World’s Premier Steam Traction Preservation Organisation. It was great to see such extraordinary vehicles on display amongst an array of classic cars.

Additionally, the National Traction Engine Trust was celebrating its 65th birthday with its sister branch, the Steam Apprentice Club, who was celebrating their 40th anniversary. The activities on their stand saw historic displays sharing the spotlight with its younger nobles’ achievements in modernising the art of steam engines. 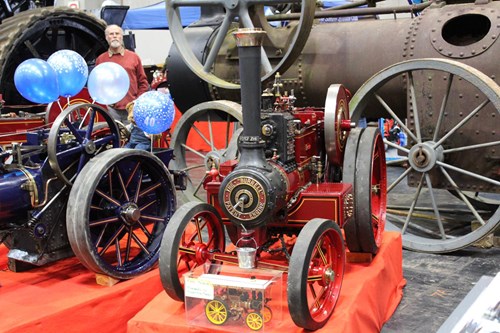 The Practical Classics Classic Car and Restoration Show attracted around 170 classic car clubs, including the likes of the BMW Car Club, the Jaguar Drivers Club, Triumph Sports Six Club and more; each with their own restoration display. 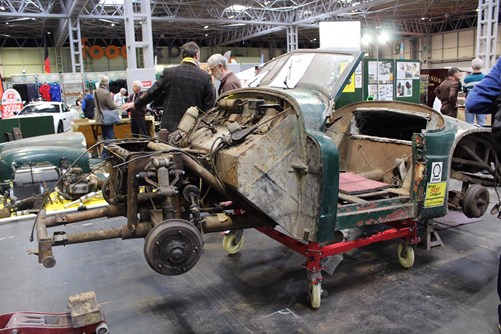 Over in Hall 4, was another classic comeback in the form of ‘Winnie’, the 1978 Vauxhall Cavalier MK1 WNA 258S. 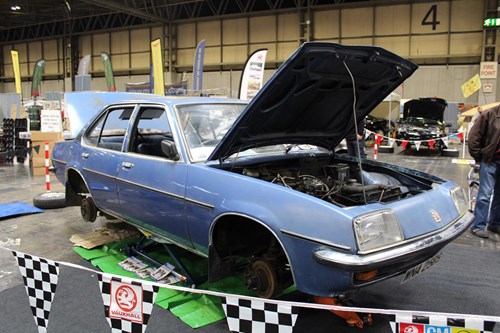 The Cavalier and Chevette Club set themselves a challenge to bring their late chairman Vince Poole’s classic back on the road. The clubs aim is to see the vehicle through its MoT before it goes up for sale in a closed auction.

Tinker, tailor, nuts and trailers… the workshop was back!

Hosted by Gilbert-Michaelson, The Workshop was ready for budding enthusiasts to learn a thing or two about restoring classic cars.  The stage had a range of activities taking place throughout the weekend, including panel work basics and lead loading.

The Gilbert-Michaelson team lead the daily demonstrations to help other classic car owners to develop their skills. The team demonstrated on a Morris Minor which was being prepared for paint refinishing and welding.

As well as spotting some of our favourite classic car clubs, it was also great to see some of our affiliated partners, including Charles Ware and Heritage Skills Academy. 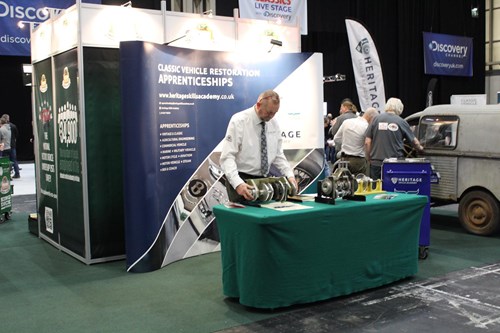 The Heritage Skills Academy shared their stand with the Federation of British Historic Vehicle Clubs (FBHVC) and the Starter Motor Charity who all brought their expertise to the show in order to attract a younger audience to the classic car industry.

Heritage Skills Academy offer Heritage Engineering Apprenticeships that specialise in classic vehicles ranging from the 1900 – 1990s. Located at Bicester Heritage the academy sets up budding enthusiasts ready to take on their love for classic vehicles.

On stand, the FBHVC brought some ‘French Fancy’ to the show as they displayed a rare Citroen CV AK350 Fourgonnette. 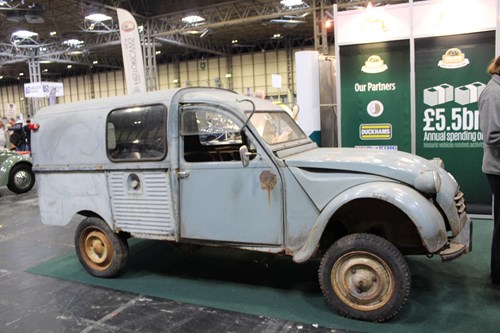 The vehicle had undergone a later-type gearchange mechanism and bulkhead, with early banjo-fitting brake and clutch pedals, which saw this combination appear very unusual.

Christmas came early for enthusiasts at the Practical Classics Restoration Show as there were a host of stands and stalls offering a variety of classic vehicle goodies. From automobile to literature and clothing to spare parts, the show had it all. 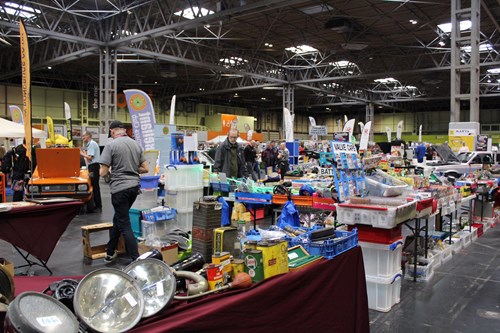 What a great time we had at the show and what a perfect way to get the classic car events rolling for 2019. If you were unfortunate enough to attend this years Practical Classics Classic Car and Restoration Show then do not worry, you can catch up on some of the best classic cars and most talked about classics at the show over on our photo gallery!

If you are looking at attending more classic car shows, or classic bike shows, then why not check out our events calendar, to see some of the best and most anticipated shows coming up in the following months?